US Elections 2016: Donald Trump cake ready at his headquarters in New York City

US Presidential Elections 2016: A Donald Trump cake has been brought at the republican candidate’s headquarters in New York City. 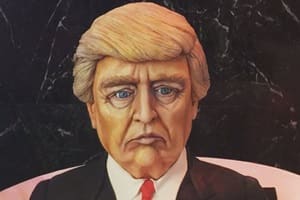 With counting of votes underway, Republicans and Democrats are waiting with baited breath to know who will bag Florida.

US Elections 2016: Counting of votes is going on and if the trends are to be believed, it could be anybody’s game. A Donald Trump cake has been brought at the republican candidate’s headquarters in New York City. Fox News tweeted, “.@realDonaldTrump cake at his #ElectionNight headquarters in New York City”. With counting of votes underway, Republicans and Democrats are waiting with baited breath to know who will bag Florida.

Former Republican President George W. Bush and his wife, Laura, did not cast a vote for US president on Tuesday but did vote for Republicans in down-ballot races, a spokesman for Bush said. “They voted ‘None of the Above’ for president,” Freddy Ford said in an email about the couple, who now live in Dallas. In a break from custom, neither George W Bush, president from 2001 to 2009, nor his father, former Republican President George H.W. Bush, endorsed the Republican nominee for president, New York businessman Donald Trump. Jeb Bush, the younger brother of George W. Bush and the son of George H.W. Bush, ran against Trump in the acrimonious and insult-laced Republican nominating contest this year.

Donald Trump had only four words to say on former Republican US President George W Bush’s decision not to vote for him: I think it is sad! Meanwhile, projections indicate that Donald Trump has taken the lead with three thumping wins in Indiana, Kentucky and West Virginia. Democrat Hillary Clinton has bagged Vermont, reported CNN. Voting is still underway in some areas of the US, and all eyes are on America to deliver a landmark verdict.

Next Story
How suitable is Donald Trump to be president? America has seen worse