UN Secretary-General Ban Ki-moon led the world body’s strong condemnation of the terror attack on a peaceful demonstration in Afghanistan, describing it as a “despicable crime” while calling for bringing to justice the perpetrators of the assault. 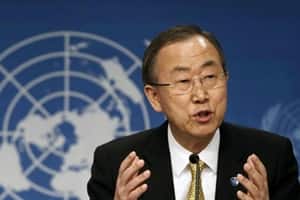 UN Secretary-General Ban Ki-moon led the world body’s strong condemnation of the terror attack on a peaceful demonstration in Afghanistan, describing it as a “despicable crime” while calling for bringing to justice the perpetrators of the assault.

At least 80 people were killed and 231 wounded in twin explosions that ripped through crowds of Shiite Hazaras in Kabul, an attack claimed by the Islamic State terror group.

According to a statement issued by his office, Ban called for those responsible for the attack to be brought to justice.

“The members of the Security Council reiterated their serious concern at the threats posed by the Taliban, al-Qaeda, Islamic State in Iraq and the Levant (ISIL), illegal and armed groups to the local population, National Defence and Security Forces and international presence in Afghanistan,” the statement said.

The 15-nation Council underlined the need to bring perpetrators, organisers, financiers and sponsors of these “reprehensible” acts of terrorism to justice and urged all UN member nations to cooperate actively with the Afghan authorities in this regard.

“The members of the Security Council stressed the need to take measures to prevent and suppress the financing of terrorism, terrorist organisations and individual terrorists,” in accordance with UN resolutions.

Asserting that terrorism in all its forms and manifestations is criminal, the Council said terrorism should not be associated with any religion, nationality, civilisation or ethnic group.

The Council reiterated that “no violent or terrorist acts” can reverse the Afghan-led process along the path towards peace, democracy and stability in Afghanistan, which is supported by the people and the Afghan government and by the international community.

Head of the UN Assistance Mission for Afghanistan Tadamichi Yamamoto called the attack “an outrage that cannot be justified and stressed that the perpetrators of the attack must be held accountable.”

“An attack deliberately targeting a large, concentrated group of civilians amounts to a war crime,” he said in the statement, which was issued by UNAMA.

“This attack is particularly heinous because it targeted civilians as they exercised their rights to freedom of assembly and freedom of expression,” Yamamoto said.