Ukraine the bone of contention between Washington and Moscow

For weeks now, Moscow has been inching towards a conflict with Ukraine. The Russian forces have around 120,000 troops on the border.  The question is  with this build up, what can the international  community more specifically the Biden administration do? 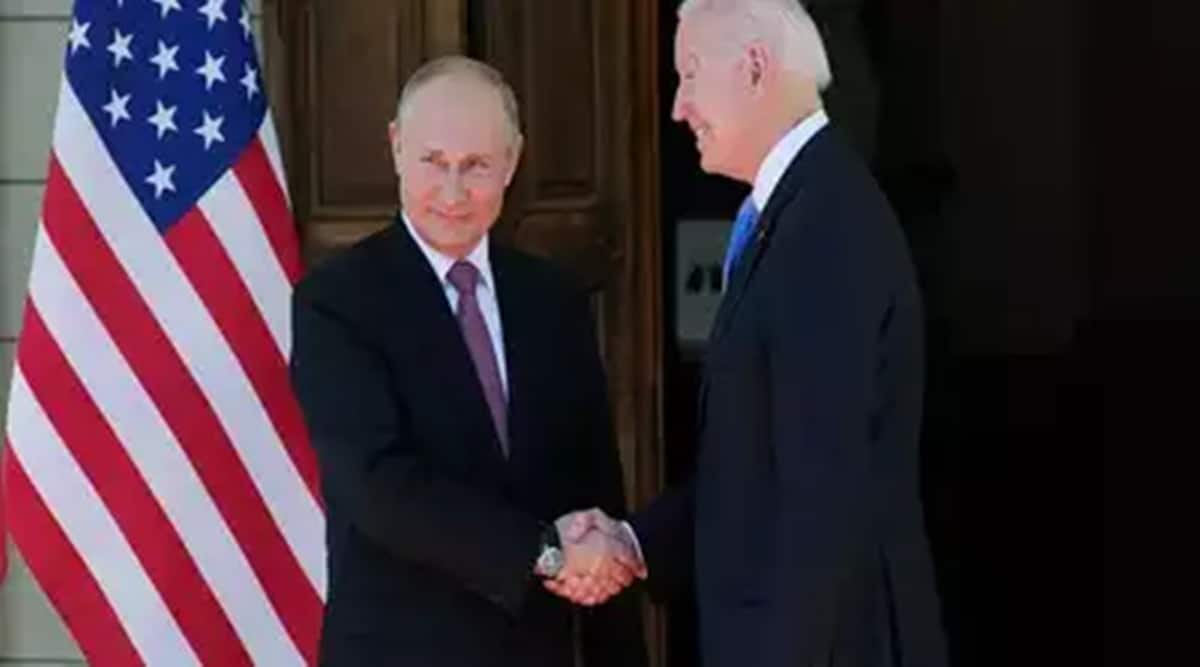 In the latest communications with the US, Washington has agreed to a meeting with Putin in an effort to deescalate the situation. (Photo source: AP)

The drums of war seem to be beating once again and more fervently than ever with Russia’s build up of armed forces on its border with Ukraine. In an effort to de-escalate the situation, the two leaders have scheduled a meeting in Geneva in the coming days .

For weeks now, Moscow has been inching towards a conflict with Ukraine. The Russian forces have around 120,000 troops on the border.  The question is  with this build up, what can the international  community more specifically the Biden administration do?

In the past, US smart power has had little success in dealing with the  Kremlin. The sanctions through biting  the  Russian economy failed  to curb  Putin’s actions. As Vice-President, Biden saw first hand unfolding of the situation when Russian forces took over Crimea. The US provided loans and  technical assistance, President Obama signed an Executive Order  that sanctioned  persons  associated with the violation of  Ukraine’s sovereignty. Additionally, he  froze the assets of Russian government officials  in the US and blocked their entry into the country. The Congress passed laws condemning Russian actions and supporting Ukrainian  sovereignty, democracy.

The Biden administration has gone the diplomatic route in an effort to diffuse the situation. Biden recently spoke with Putin in an effort to calm the  situation. It was also an attempt to send a warning to the Kremlin to curtail the appetite for invasion. Biden has put Putin on notice regarding his actions. Biden warned to counter Russian aggression with ‘decisive’ action. This could include a myriad of responses including the imposition of additional sanctions  on Russia along with western allies.

The US Congress for its part has incorporated Ukraine into the Defense Budget 2022. It  has included USD300 million to support Ukraine’s armed forces, USD4 billion for the European Defense Initiative and USD150 million for Baltic security cooperation. However, the omitted  an amendment that would ban US citizens  from Russian debt  as well as the  sanction of Nord Stream 2 were not included in the defense budget.  However, the  problem  as always is whether the  US  has  gone far enough to  deter Moscow’s actions.

NATO and the  EU along with the  UN have condemned Putin’s actions. The  buildup on the border has irked NATO  and  is closely monitoring the  situation without further pushing  Putin’s forces further. The members of the EUas well have condemned Russian actions, though Ukraine is not part of the  EU it shares a border with EU member states which is worrisome. Some EU leaders are in favour of sanctioning the Nord Stream 2, the gas pipeline. Others are in favour of  switching off the controversial gas pipeline.

Despite the international  tension, Moscow has an ally. Beijing has strong connections to Moscow especially with the natural gas pipeline. The Chinese have tried to stay out of the situation, however this lack of outward support could have an impact on the  relations between the  two counties in the future. Beijing is definitely walking a tightrope with its strong economic ties with  Mocow exports rising from USD 42 billion in 2014 to USD 57 billion in 2020.

From the Russian perspective, there is a method to Putin’s  madness when it comes to  his moves on the  Ukrainian border. The  primary goal being consolidation of  power and quelling any threat assumed or otherwise to Russian sovereignty. In  doing so Putin attempts to expand his power and influence not only within Russia but the  former Soviet empire  as well as. This includes Ukraine. Additionally, Putin sees the expansion of NATO as a deliberate attempt by the West to encircle, isolate and contain the growing Russian influence and power in the region.

In the latest communications with the US, Washington has agreed to a meeting with Putin in an effort to deescalate the situation. There is also a deal to halt the expansion of NATO which is on the table.

However, the more important question here is whether Russia will invade Ukraine?  Putin, ever the strategist, is looking for a way to put the  US  and its allies on notice regarding  the further expansion of NATO. If invasion is really on the table, firstly,  Putin will need a trigger which could be provided by the  Russian-backed separatist thus forcing Putin’s hand .Secondly, he would require the  shoring up of support within Ukraine which he got to a certain extent in 2014. Finally, he would have to ensure a low cost, favorable outcome. Therefore to be certain, the Russian backed separatis along with those sympathetic to Moscow will have to show a great deal of support.

The West seems to be sure that Putin is planning an invasion, his plan may not even involve an invasion, just the threat of one. Putin to some extent does want to test the response of the new US President and  his reaction to certain situations very much like Kruschev did with Kennedy in the 1960s. In positioning armed forces on the border, the Russian leader seems to be testing US and NATO responses and to what extent they are willing to negotiate with him.

In the  final analysis, Putin who seems to be trying to live the  glory days of the  Soviet Union and its expansion into Eastern Europe, the  question is whether the if Russia and  US along with its  Western allies reach a deal, can they trust Putin or  will it be equated with the  ‘Appeasement at Munich’ an agreement that was meant  at satisfying Hiler’s appetite  but only  further whetted his appetite.  As tensions rise and with Biden slated to meet Putin and address his concerts, to what extent the  US and  NATO are willing to take a conciliatory position is questionable.

(The author holds a PhD from the School of International Studies, JNU. She was a Fulbright-Nehru Doctoral Scholar at the American University, Washington DC. She currently teaches Global Politics. Views expressed are personal and do not reflect the official position or policy of Financial Express Online. Reproducing this content without permission is prohibited).