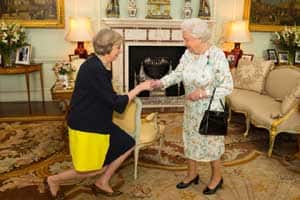 LIVE: Theresa May takes charge as British Prime Minister after  David Cameron’s resignation was accepted by Queen Elizabeth. An official image showed May curtseying to the queen during an audience at Buckingham Palace. Under Britain’s unwritten constitution, it is up to the monarch to ask the leader of the party that commands a majority in the House of Commons to form a government.

LIVE | Here is what has been happening through the day:

9:14pm: For me politics has always been about public service in national interest: David Cameron

9:13pm: I believe that Theresa May will provide a strong & steady leadership, says David Cameron outside 10, Downing Street, UK.

9:12pm: I will tender my resignation shortly at the Buckingham Palace: David Cameron outside 10, Downing Street, UK.

8:30pm: Theresa May set to take charge from Cameron as UK PM

5.25 pm: British Prime Minister David Cameron receives standing ovation from colleagues at the close of his final session of prime minister’s questions. The members of the House of Commons rose as one to thank a smiling Cameron for his six years of service as a Conservative prime minister.

5.15 pm: Conservative MP Ken Clarke – a former chancellor – who thanks the PM for his statesman-like leadership and for the “debating eloquence and the wit and humour he’s always brought” to PMQs.

5.05 pm: David Cameron says his government has created 2.5 million new jobs and seen the deficit cut by two thirds with “a growth rate at the top of the developed world”, adding this has allowed him to fully fund the NHS.

4.55 pm: David Cameron thanks the Labour leader for his kind remarks about his family, and he too pays tribute to his “amazing” wife and children who are watching his last PMQs from the Commons gallery.

4.53 pm: Jeremy Corybn pays tribute to the prime minister and wishes him and his family well. He says it is so often politicians’ loved ones who make “enormous sacrifices” for the work they do.

4.50 pm: David Cameron says he admires Jeremy Corbyn’s “tenacity” – in reference to the Labour leader’s ongoing battle with his party to stay on as leader. “Corbyn reminds me of the Black Knight in Monty Python’s Holy grail, saying “it’s only a flesh wound”, says Cameron.

Corbyn seeks an assurance that EU nationals will be guaranteed the right to stay in the UK post Brexit.

David Cameron says the government is “working hard” to give that guarantee – but says it’s important to get a reciprocal deal for Britons abroad.

4.45 pm: Jeremy Corbyn now challenges David Cameron over the price of the government’s affordable homes.
“When it comes to women prime ministers I’m pleased to say pretty soon it will be 2-0… and not a pink bus in sight,” Cameron says.

May, is seeking to calm the country, and financial markets, after upheaval following the unexpected result. According to reports, May is preparing to promote several women Conservative colleagues into cabinet positions.

As May plans to shakes up the team running the government, allies including Amber Rudd, currently UK Energy Secretary, and Justine Greening, the International Development Secretary, are among those expected to be in line for prominent positions, reports the Guardian.