The refugee crisis at Belarus-EU border

The crisis began on July 7, 2021, when President Alexander Lukashenko of Belarus threatened to flood the neighboring EU countries with human traffickers, drug smugglers and armed migrants. 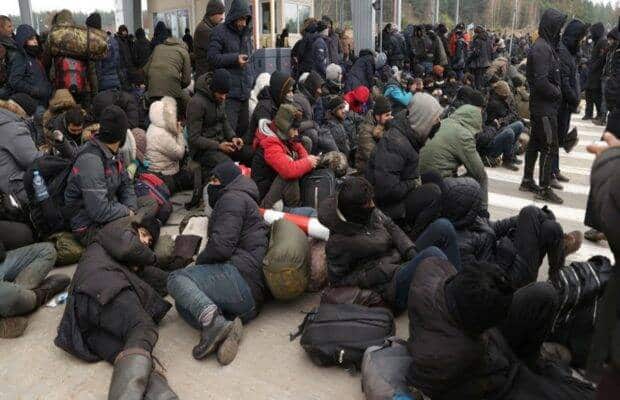 Migrants gather on the Belarusian-Polish border in an attempt to cross it at the Bruzgi-Kuznica Bialostocka border crossing, Belarus November 15, 2021. (Reuters Image)

The 2021 Belarus -European Union (EU) border crisis is a migrant crisis consisting of an influx of several tens of thousands of immigrants, mainly from the Middle East and Africa, to Lithuania, Latvia, and Poland from across the common borders with Belarus, a non-EU country. The crisis has been triggered by the severe deterioration in Belarus-EU relations, following the 2020 Belarusian Presidential elections, the 2020-21 Belarusian protests, the Ryanair Flight 4978 incident and its sanctions, and the attempted repatriation of sprinter Krystsina Tsimanouskaya.

The crisis began on July 7, 2021, when President Alexander Lukashenko of Belarus threatened to flood the neighboring EU countries with human traffickers, drug smugglers and armed migrants. Later, the country started promoting tours, ostensibly for hunting purposes, and then led them across the borders into neighboring EU countries, including by cutting the wire fences. Those that managed to cross were caught, put in detention centers in inhumane conditions and barred from claiming asylum.

The affected states which share border with Belarus, namely, Poland, Lithuania and Latvia have described the crisis as hybrid warfare, i.e., human trafficking of migrants waged by Belarus against the EU. The three countries have declared a state of emergency and announced their decisions to build border walls with Belarus.

The situation has invited protests and concerns from human rights organizations over asylum seeker pushbacks by Lithuanian and Polish border guards, and the denial of the right to seek asylum, as well as denial of basic provisions such as food, water and shelter for the migrants. Poland has been additionally criticized for not allowing journalists, doctors and NGOs to the border. Equally, Human Rights Watch has accused Belarus of manufacturing the crisis and inflicting torture on those not able to cross the border and forced to stay back.

Lukashenko who has ruled Belarus since 1994 apparently did not get a convincing victory in the sixth Presidential elections of 2020; several countries including US, UK, Canada, EU and their allies refused to accept the so-called flawed election results; the EU went a step further and declared sanctions on Belarusian officials deemed to be responsible for “violence, repression and election fraud”. In Belarus too, the election results led to widespread protests which were severely suppressed.The main opposition candidate SviatlanaTsikhanouskayawas apparently brought to the border with Lithuania and pushed to cross at the risk of harm to her children. Lithuania declared her safe, while also acknowledging that she had “few options”.Lukashenko has been accused of masterminding the crisis in revenge for the sanctions that were imposed on him post -election.

On 23 May 2021, Ryanair Flight 4978 was intercepted while in Belarusian airspace and forced to land at Minsk airport where two of its passengers, opposition activist and journalist Roman Protasevich with his partner were arrested. Following this, the US, EU and UK and Canada issued a joint statement on 21 June announcing further sanctions against members and supporters of the Belarusian government and Belarusian state-owned companies. The EU also banned Belarusian carriers from flying into EU airspace and imposed economic sanctions on Belarus.

During July-August 2021, at the Tokyo Olympics, Belarusian sprinter Krystina Tsimanouskayacriticized national coaches, who then tried to force her back to Belarus; she sought help at the airport and was subsequently granted asylum in Poland.

At least a dozen refugees are reported to have died at the Polish border, though the real figures may be more. The crisis has also fueled animosity towards Russia, Belarus’s main supporter which is also being blamed. Russia has already traded words with the western countries at the UNSC over the border crisis.

Estonia, France, Ireland, Norway, the US and UK raised the migrant crisis in a closed-door meeting of the UNSC earlier in November and said in a statement that they ‘condemned the orchestrated instrumentalization of human beings whose lives have been put in danger by Belarus for political purposes with the objective of destabilizing neighboring countries and EU’s external borders and diverting attention away from its own increasing human rights violations’. They described the Belarusian approach as ‘unacceptable’ and accused Lukashenko of becoming a threat to regional stability and called for ‘a strong international reaction’ to hold Belarus accountable. Outside of the meeting, Russia retorted by condemning such ‘masochist tendencies’ and said that Russia would not hesitate, if need be, to use its veto for Belarus.

The UN Human Rights Council has urged all parties to respect human rights of the refugees and refrain from using them for political ends: “their human rights are of paramount importance”, it said. It is estimated that at least 50% of the stranded migrants are women and children.

Last week, Lukashenko proposed a plan to send 5000 refugees back to their countries, provided Germany accepted 2000 of them-Germany and the EU rejected this as an unworkable solution. Nor is there any appetite in the EU to fund Belarus to keep the migrants as in the 2016 deal between Turkey and the EU that stemmed the flow of refugees from Turkey into Europe in exchange for financial support from the EU.

Belarus might have taken a chance hoping to recreate the scenario of the 2015 refugee crisis, when the EU gave money and other non-financial incentives to non-EU governments to keep migration flows at bay. It is yet conceivable given the sensitivity of the EU towards criticism on human rights grounds that some ‘face saving measure’ may be negotiated involving repatriation of migrants to their countries of origin, possibly paid for by the EU. However, the situation remains uncertain given the unwillingness of most of the migrants to go back home.

Last week the situation reached a boiling point where migrants camped in subzero temperatures and surrounded by barbed wire fences, clashed with armed Polish border guards: the guards sprayed them with water cannons and tear gas. The confrontation eased slightly when, following a phone call between Lukashenko and German Chancellor Merkel, Belarus cleared a camp near the border crossing and transferred people to another location.Within days,however, Poland again accused Belarus of continuing to funnel refugees to the borders. Poland, though an EU member, is not exactly in the good books of the EU and is known to have clashed over several issues, including over the migrant crisis of 2015 due to its hardline approach against accepting any refugees on its soil.

There is a stalemate, and a way out appears unlikely unless the demands of Belarus are met. For Belarus the priority is to get the sanctions revoked in return for any border cooperation with the EU. Most of the people who crossed into Poland from Belarus have either been sent back or held at detention centers, an estimated 1800 people-mainly from the Kurdish region of Iraq-are being held. Similar reports have come out of Latvia, Lithuania, and Estonia. Taking the view that the bloc has been challenged, EU has allocated the following: Euros 700,000 in humanitarian assistance for those stranded in Belarus, at the borders and inside the country; Euros 36.7 m for implementation of asylum procedures in Lithuania following EU Commissioner Johansson’s visit; Euros 200m for border management; Euros 3.5m to support voluntary returns.

Poland has built a razor wire fence along its border and imposed a state of emergency that bars journalists and aid workers from a 3 km deep strip along the border, which it is alleged has made it harder for people to access legal representation to seek asylum or humanitarian aid. Those that manage to breach the border are being immediately pushed back or handed over for deportation-a procedure that usually takes 30 days. That gives them a chance to seek legal representation for asylum during that time. According to legal activists, the asylum-seeking process can be lengthy, taking months or even years as people remain in detention centers or open camps where they have some freedom of movement and the opportunity to seek undocumented employment. In either case, refugees have a legal right to government aid in the form of shelter, food and some material support, but the camps are usually overcrowded and lack legal or mental health support. Only those arriving in Poland in a critical medical state have been given a chance to seek legal protection and apply for asylum while being treated at a hospital.

Lukashenko has apparently acknowledged that his action may have helped refugees reach the EU; he has floated the possibility of cutting gas supplies from Russia if the EU imposed new sanctions over the influx of refugees. He has even warned that if the crisis deteriorated too far, war was inevitable. His words echo those of the Polish PM that the crisis could be a prelude to “something much worse”.

Poland has deployed 15,000 troops along the border with Belarus, while Russia has increased its military presence near Ukraine, Belarus and Kaliningrad enclave near Poland and Lithuania, and dispatched two bombers to patrol Belarusian airspace. There is danger that all this may lead to military incidents. Anyarmed conflict will only put the refugees in an even more precarious position where no one on either side will care about them. Even if Belarus and the EU were to reach a deal, analysts say refugees may still be left in a limbo at the border or in detention centers.

Lukashenko is pushing the EU to backtrack on sanctions. He has already begun allowing some migrants to return to their countries of origin. Last week, almost 400 people flew to Iraq, and over 600 returned to Erbil, the capital of Kurdistan. At the same time Lukashenko said that if someone wants to take their chances and cross the border into the EU, his government will not stop them. Around 2000 migrants, mainly from the Middle east are camped in a heated warehouse turned into a temporary shelter near the border with Poland. Lithuanian authorities have warned they will close the borders with Belarus if the situation does not improve.

Belarus is blaming the EU for imposing sanctions after the flawed election and after the government crackdown on pro-democracy protesters. His detractors say Lukashenko is in no hurry to end the crisis that has seen his country become one of the EU’s top geopolitical problems. They fear his next gambit may be to try to funnel refugees from Afghanistan towards the EU; it all depends on whether Putin will allow the transit of Afghans through Russia. According to analysts, Lukashenko wants to keep the EU in suspense until the first quarter of next year. Apparently, he has even warned transit of migrants through Ukraine; Ukraine’s 1000km border with Belarus could quickly become a crisis zone. Ukraine, a non-EU country,has followed EU sanctions on Belarus, it has accused Russia of massing troops and fearing that Belarus could send migrants over its borders, has taken steps to strengthen its frontiers including military drills etc.

(The author is a former Indian ambassador and former envoy to the EU. Twitter:@nchauhanifs Views expressed are personal and do not reflect the official position or policy of Financial Express Online).