The enduring legacy of Vaclav Havel 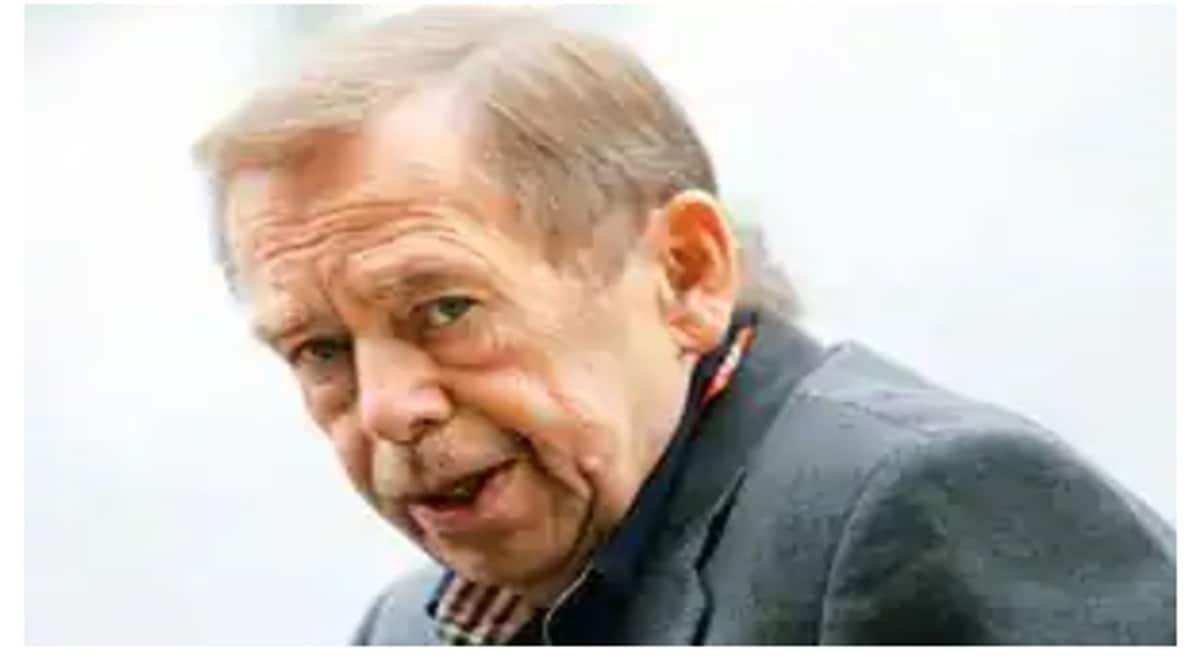 One permanent fixture in Havel’s office was a bust of Gandhi. (Photo source: Reuters)

On 18 December, 2021, Vaclav Havel’s 10th death anniversary has been commemorated world over including India. In New Delhi a Vaclav Havel soiree was jointly organised, and very appropriately so, by the Czech and Slovak Embassies on December 18, 2021. The Charge d’affaires of Czech Republic, Roman Masarik and Charge d’affaires of Slovak Republic Valeria Zolcerova, acted as the gracious hosts.

During the soiree, a striking audio visual presentation paid tributes to Vaclav Havel, 5 October 1936 – 18 December 2011,as Czech statesman, playwright, and former dissident,who served as the last President of Czechoslovakia from 1989 until the dissolution of Czechoslovakia in 1992 and then as the first President of the Czech Republic from 1993 to 2003. He was the first democratically elected president of either country after the fall of communism.As a writer of Czech literature, he is known for his plays, essays, and memoirs.

Prof Surendra Munshi, an eminent sociologist of India who was keynote speaker at the soiree, reminded that though born with a silver spoon Havel’s Educational opportunities were circumscribed by his bourgeois background, when freedoms were limited by the Czechoslovak Socialist Republic. Havel first rose to prominence as a playwright. In works such as The Garden Party and The Memorandum, Havel used an absurdist style to criticize the Communist system. After participating in the Prague Spring and being blacklisted after the Warsaw Pact invasion of Czechoslovakia, he became more politically active and helped found several dissident initiatives, including Charter 77and the Committee for the Defense of the Unjustly Persecuted. His political activities brought him under the surveillance of the secret police, and he spent multiple periods as a political prisoner, the longest of his imprisoned terms being nearly four years, between 1979 and 1983.

Havel’s Civic Forum party played a major role in the Velvet Revolutionthat toppled the Communist system in Czechoslovakia in 1989. He assumed the presidency shortly thereafter, and was re-elected in a landslide the following year and after Slovak independence in 1993, he accepted Slovak’s breakaway against his own conscience. Havel was instrumental in dismantling the Warsaw Pact and enlargement of NATO membership eastward. Many of his stances and policies, such as his opposition to Slovak independence, condemnation of the expulsion of Germans from Czechoslovakia after World War II, and granting of general amnesty to all those imprisoned under the Communist era, were very controversial domestically. By the end of his presidency, he enjoyed greater popularity abroad than at home. Havel continued his life as a public intellectual after his presidency, launching several initiatives including the Prague Declaration on European Conscience and Communism, the VIZE 97 Foundation, and the Forum 2000 annual conference, the last having been attended by me in Prague in 2019.

In 2019, during my posting in Prague, Czech Republic, several events were held to observe the 30th anniversary of the so-called Velvet Revolution of 1989 which became the defining moment of the country’s modern history.

Havel’s political philosophy was one of anti-communism, humanitarianism, environmentalism, civil activism, and direct democracy. He supported the Czech Green Party from 2004 until his death. He received numerous accolades during his lifetime, including the Presidential Medal of Freedom, the International Gandhi Peace Prize, the Philadelphia Liberty Medal, the Order of Canada, the Four freedoms Award, the Ambassador of Conscience Award, and the Hanno R Ellenbogen Citizenship Award. He is considered to be one of the most important intellectuals of the 20th century, and certainly the pre-eminent one in Central and East Europe. The international airport in Prague was renamed to Vaclav Havel Airport Praguein 2012.

Prof Munshi opined that notwithstanding his flamboyant personal lifestyle, in his thoughts and actionHavel was a true Gandhian.The Velvet revolution was a non-violent transition of power in what was then Czechoslovakia. Democratisation in the country, and perhaps in most of Eastern Europe took place less within the framework of existing state systems and more at the level of civil societies.Dissidents like Vaclav Havel in Czechoslovakia opened spaces for new civil and democratic politics in Eastern Europe.

Charter 77, the Czechoslovak manifesto for human rights, issued in January 1977 by Havel, Jan Patocka and Jiri Hajek, paved the way to the events of the ‘Velvet Revolution’ of November 17, 1989. Havel’s political philosophy was marked by notions such as ‘living in truth’, ‘conscience’, ‘responsibility’ and ‘civility’. So, the problem for Havel was to confront political power by inviting people to live in truth and justice, and for decency. In his writing, ‘The power of the powerless’, he affirmed, ‘it can be any means by which a person or a group revolts against manipulation: Anything from a letter by intellectuals to a workers’ strike, from a rock concert to a student demonstration, from refusing to vote in the farcical elections, to making an open speech at some official congress, or even a hunger strike’. In picking the right moral and political alternative lies the originality of the Velvet Revolution of 1989.The strategies of nonviolent resistance, dissent and non-cooperation that were presented by Havel as different ways of living within truth, became successful strategies in 1989 by echoing an ethical dimension of politics in all of Eastern Europe.Havel gave to the world a new grammar of politics. I have personally witnessed masses of Czech protesters that still gather in Prague from time to time as if to mirror the images of 1989.

Havel’s non-violent struggle for self-rule, his fight for truth, his belief in environmentalism and his disenchantment with division of the country, compel a comparison with Gandhi whose life work had a distinct influence on Havel’s thoughts and practice which make them both relevant even today.One permanent fixture in Havel’s office was a bust of Gandhi. Till date,the Czech Foreign office informed me, the country knows India first and foremost as the land of Gandhi. Vaclav Havel remains by far the only world personality who was bestowed both the 1993 Indira Gandhi Prize for Peace disarmament and Development in 1994, ‘for his unflinching commitment to the principles of non-violence and uncompromising struggle for the protection of human rights and liberties’, and the 2003 International Gandhi Peace prize.

Havel reaffirmed his convictions in his 2006 autobiography, “Briefly, Please”. He chose the title as a sign of the commercialised media, which convert everything into mindful platitudes for rapid transmission. According to Slavomir Sierakowski, sociologist of Poland, ‘unlike dissidents’ manifestos, which, once the fight is over, quickly reach their expiration date and are buried in the historical archive, Havels’remains one of the very few exceptions’.Havel was taken with environmentalism and he saw urban issues as a political priority long before they became a matter of course for the rest of us.

The Forum 2000 Foundation based in Prague continues to pursue the legacy of Vaclav Havel by supporting the values of democracy and respect for human rights and attracts a wide array of illustrious personalities, including His Holiness the Dalai Lama, so ably represented at the soiree by Tibetans from Dharamshala including young members of parliament of the Tibetan government in exile. It is Havel Vaclav’s enduring legacy that the Czech parliament has the largest group on Tibet.

The Slovak Cda Valerie alluded to the enduring legacy of Havel in the peaceful parting of ways symbolised by a fenceless and harmonious co-existence of both the Czech and the Slovak Embassies in the same compound of Chanakyapuri in New Delhi. Prof Munshi said he had not given up hope that the Czechs and the Slovaks would one day reunite.

Vaclav Havel was an unassuming person and, according to Czech Cda Roman, he was very comfortable in the anonymity of New York where Roman met him during posting as the Czech Deputy Consul General. Havel himself described his trajectory to four term presidents in his memoirs, comparing to the legendary Czech stories of Honza who beats his head against the wall for so long that the wall eventually collapses and he becomes king and rules and rules and rules for 13 long years. Though usually very modest, he understood what his example meant for others, “Might it be a source of hope for others who have not yet experienced the fall of their wall.”

(The author is a former Indian ambassador and former envoy to Czech Republic. Twitter:@nchauhanifs Views expressed are personal and do not reflect the official position or policy of Financial Express Online. Reproducing this content without permission is prohibited).