Taliban’s offensive: Impact on the near region

In the total count (out of 407 districts all-Afghanistan), according to a real – time analysis by a reputed analyst, as on 05 July 2021, the Taliban, controls 195 districts and contests 129 while the government’s control stands at 75 districts. 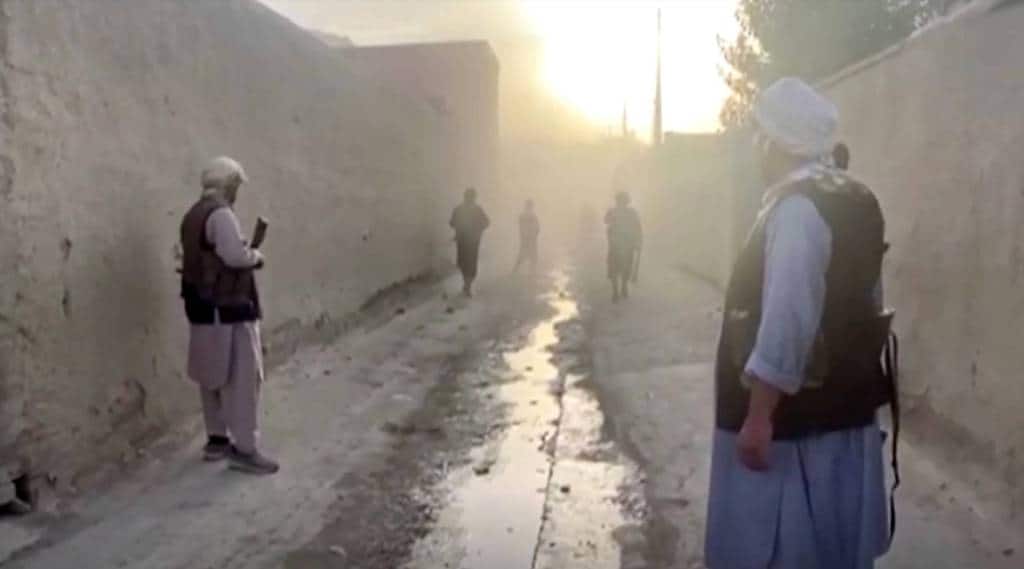 The northern offensive, commencing on 01 May 2021, underscores the Taliban strategy of taking the fight directly to the turf of Afghanistan’s elite power – brokers.

Afghanistan is at the risk of total collapse as the Taliban has made dramatic gains in the traditional core of Afghanistan government’s base of power in the Northern provinces while seizing large swathes of the country against a faltering ANDSF that appears to have lost the cohesion of a fighting force and, in many reported encounters, the will to fight. In the total count (out of 407 districts all-Afghanistan), according to a real – time analysis by a reputed analyst, as on 05 July 2021, the Taliban, controls 195 districts and contests 129 while the government’s control stands at 75 districts.

The northern offensive, commencing on 01 May 2021, underscores the Taliban strategy of taking the fight directly to the turf of Afghanistan’s elite power – brokers. If the Taliban can deny the Afghan government their northern bastion of power, the battle of Afghanistan is effectively lost. And if the North is lost, and as things stand, the government will be unable to retain its tenuous hold of the demographic, military and territorial terrain in East, West, South or Central Afghanistan. This will put into motion a domino effect with the Taliban successively taking control of population canters and ungoverned space in the East, West and South and rolling-up to lay siege to Kabul. According to reports received from Kabul, India has closed three of its five consulates and has now commenced evacuation of Indian citizens from Afghanistan. The map below shows the present and ongoing state of battle for the seven Northern Provinces (WEST to EAST) – Badghis (06 out of 07 districts in Talib control), Faryab, Jawzjan, Balkh, Kunduz (06 of 07 Districts), Takhar (14 of 17 Districts) and Badakhshan (26 of 28 Districts). Five provincial capitals of Badghis, Faryab, Kunduz, Takhar and Badakhshan are under direct threat with repeated Taliban assaults: –

A Taliban victory in Afghanistan, with the degrading withdrawal of an exhausted US – NATO global power and the collapse of the democratically – instituted Afghan government, will elevate this group to the status of a ‘regional hero’ for VEOs (Violent Extremist Organization) and will be a beacon for a surge of Islamic extremism and expansion in nations bordering Afghanistan and, perhaps, beyond.

Central Asia is the third largest point of origin for Salafi jihadist foreign fighters for the conflagration in Iraq and Syria with more than 4,000 fighters joining the conflict since 2012. Though Central Asia accounts for less than 05 percent of global Muslims, 20 per cent of all foreign fighters originate from this region. President Vladimir Putin has stated that as many as 7,000 fighters have joined the ranks of the Islamic State. While many Central Asians align with the ISIS, they also fight alongside the AQ – affiliated group al – Nusra Front, Kaish al – Mujahideen wal – Ansar, Jamaat Sabri (mostly an Uzbek group) and Imam Bukhari Jamaat (also an Uzbek group) and make up a small percentage of Chechen – led Caucasian VEOs. Central Asia and Russia fear the return of these jihadists from the Levant that has the explosive potential to conflagrate existing threats from the IMU (Islamic Movement of Uzbekistan) and the ETIM (Eastern Turkistan Islamic Movement) both with connections to the AQ, ISIS and the Taliban. Russia is concerned about its soft underbelly consisting of the former Soviet republics of Turkmenistan, Uzbekistan, Tajikistan and more in depth, Kazakhstan and Kyrgyzstan, and the spill – over of Talibanization and radicalization considering the blurred lines of ethnicity and religion between these countries and Afghanistan. Russia has a defence mechanism in place in the form of the CTSO (Collective Security Treaty Organization) that includes Tajikistan, Kazakhstan, Kyrgyzstan, Armenia and Belarus but excludes Uzbekistan (withdrew in 2012) and Turkmenistan. There is also a Collective Rapid Reaction Force tasked for anti – terror operations. These organizations remain largely untested to date. Russia has a permanent military base in Tajikistan with the deployment of 201 Motor Rifle Division (approx. 7,000 troops and 90 AFVs) and conduct frequent anti – infiltration / anti-terror exercises with the Tajiks along the Afghanistan – Tajikistan IB.

China was among the first to recognize the implications of a merging of Islamic VEOs and the Uyghurs of Xinjiang. China shares an IB of 76 kms with Afghanistan along the strategic Badakhshan Corridor (Tajikistan to the NORTH, China’s Xinjiang to the EAST and Pakistan’s Gilgit to the SOUTH) and numerous reports have emerged since 2017 of a Chinese military base constructed in this corridor. On this exposure, the Chinese claimed that they were training with Afghan security forces in anti – terror operations – a fact neither denied nor acknowledged by the Afghans. The Chinese also have a base in Tajikistan across the Afghanistan – Tajikistan IB and it is evident that the Chinese field a significant military presence in the area and are, without doubt, active in the Badakhshan Corridor

Iran is a major regional power and a Shi’ite nation. Tehran is apprehensive of Sunni hardline VEOs like the ISIS but have reached some sort of accommodation with the Taliban who they view as the emerging player in Afghanistan. Reports have emerged frequently since 2009 of Iranian – made munitions and heavy weapons being found in the Taliban’s arsenal. Iran is a primary transit conduit for Afghanistan’s illicit narcotics with, as reports go, the complicity of the IRGC. The UNODC estimates that 60 per cent of Afghanistan’s heroin and morphine moves through Iran. Iran have recruited Hazara (Shi’ite minority from Afghanistan) youth, from both the Afghan immigrant community living in Iran and from Afghanistan, to fight in Syria to prop-up the regime of President Basher Assad and, known as the ‘Fatemiyoun Brigade’, have gained tremendous combat experience in battles with the ISIS. This force (2,500 of whom have returned to Afghanistan in 2018) are a potentially potent weapon to fight the IS (K) and the Taliban should the exigency arise.

The reformation of the TTP (Tahrik I – Taliban Pakistan), an umbrella organization for a number of Islamist VEOs to include the AQ and ISIS, has raised grave concerns in Pakistan. Pakistan is fast losing its influence on the Taliban as with more territorial gains being made day by day and the absence of US / NATO airpower and C4I capabilities, the Taliban have no need for cross-border sanctuaries and staging areas in Pakistan. Reports indicate that Pakistan has called on the Taliban for support against a renewed agenda of violence in the FATA region and, probably, in the Baluch region where vital Chinese CPEC assets are deployed. However, Pakistan can play a vital role to usher in peace and stability by contributing positively to the Afghan peace process.

The greatest threat that a Taliban victory can bring to the region is a return to the Islamist Jihadist’s dream of a State of Khorasan. The term came into refocus after the creation of the Islamic State of the Khorasan province, IS (K), in 2014 based in the badlands of Nangarhar Province in Afghanistan close to the Tora Bora area of Bin Laden fame. Historically Khorasan encompasses modern – day Iran, Central Asia, Caucasus, North Africa, Middle East, Afghanistan, Pakistan and India. Some of these regions are already embroiled in conflict with off-shoots / affiliates / regional franchises of the AQ and ISIS. Please see map below:

The IS (K) still remains a potent, virulent and undefeated force in Afghanistan. Weakened by IFCs (Inter – Factional Clashes) with the Taliban, its powerful violent big – tent brand is still a lightning – rod attracting jihadist VEOs in the Afghanistan – Pakistan region to embrace their ideology. The Taliban has been at war with the IS (K) but a change may be in the offing as the on – ground operational command and day to day function of the Taliban is being increasingly conducted and controlled by Siraj Uddin Haqqani, Deputy Emir of the Taliban, and leader of the HQN (Haqqani Network). Their respective extremist ideologies may be a meeting ground for both factions. While the IS (K) “seeks to establish a Caliphate in South Asia and Central Asia governed by Sharia law which will expand as Muslims from across the region and world join”, the Taliban seek a Sharia – governed state for Afghanistan – for the moment. The IS brand is increasing in potency in parts of Africa and the Middle East and with its foothold in Afghanistan under the patronage of a Taliban regime, it is plausible that the IS (K)’s ideology could spill – over from Afghanistan to other countries of the region. The Kashmir issue has so far remained a geographical issue (nationalists’ vs patriots) by pro – IS individuals and not a fight in the name of Islam. The IS (K) can achieve a paradigm shift in this perspective by projecting the Kashmir issue on the global jihadist stage as a war against Islam.

According to RAND Corporation… “Winning in Afghanistan may not be an available option but losing certainly is, and a precipitous departure, no matter how rationalized, would mean choosing to lose”.

The US option, viewed from any angle, has opened a can of worms and has created a disastrous situation in an already war – ravaged Afghanistan that could plunge the region into chaos, sectarian / ethnic conflict, economic depression and a humanitarian crisis of immense proportions.

(The author is Indian Army Veteran with 33 years of service. Post retirement in 2008, he has worked with an international consultancy in Afghanistan as the Divisional Security Advisor based in Kabul. Trained in Kabul in COIN (US) and Country Security Management (Netherland), he has extensive ground experience of 11 years in Afghanistan and the region. Views expressed are personal and do not reflect the official position or policy of Financial Express Online.)