Japanese Prime Minister Shinzo Abe said he would delay a sales tax hike scheduled for next April by two and a half years, a senior ruling party official said after a meeting with the premier on Monday. 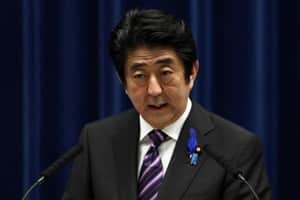 Shinzo Abe, at a meeting, said it was vital for advanced nations to pull together on sending a global, unified message that everything was being done to ensure stability in markets. (Reuters)

Japanese Prime Minister Shinzo Abe said he would delay a sales tax hike scheduled for next April by two and a half years, a senior ruling party official said after a meeting with the premier on Monday.

Komura’s comments confirm what sources had told Reuters on Sunday as Abe looks to avoid dealing a hammer blow to a fragile economic recovery, with the announcement on the tax decision expected ahead of an upper house election expected in July.

But Finance Minister Taro Aso has voiced opposition, saying that Abe should dissolve the lower house of parliament and call a snap election if he were to postpone the tax hike.

Speculation persists that Abe may call a snap election for the lower house to seek a mandate for postponing the tax increase, after a rise in his support rates following the G7 summit and U.S. President Barack Obama’s historic visit to Hiroshima, site of the world’s first atomic bombing, on Friday.

A survey by the Nikkei business daily published on Monday showed Abe’s support rose three points to 56 percent, while a Kyodo news agency poll showed a 7 point rise to 55.3 percent.

But Toshiro Nikai, another senior LDP official who met Abe on Monday, said the premier did not appear to have any plan to call a snap election for the time being.

Abe is meeting senior LDP and coalition party officials on Monday to gain consent for his plan to delay the tax increase.

He is expected to formally announce the tax hike delay by the end of the current session of parliament on Wednesday, government officials have told Reuters.

The prime minister is also expected to order an extra budget to boost stimulus measures, just two months into the fiscal year and on the heels of a supplementary budget to fund rebuilding efforts after the recent earthquakes in southern Japan.

Consumption has yet to recover after Japan fell into recession when Abe raised the sales tax to 8 percent from 5 percent in April 2014 in an effort to curb government debt.

Data released on Monday showed retail sales fell in April for the second consecutive month, bolstering the argument that next year’s tax hike should be postponed.

Fiscal hawks like Aso have said the tax hike is critical to rein in Japan’s huge public debt and cover ballooning social welfare costs of its fast-ageing population.

Abe has long said he would proceed with a plan to raise the tax rate to 10 percent next April unless Japan faced a crisis on the magnitude of the Lehman shock.