Islamabad-based accountability court judge Mohammad Bashir pronounced the verdict behind closed doors. Earlier, he had rejected the application of the Sharif family seeking a seven-day postponement in the announcement of the verdict. 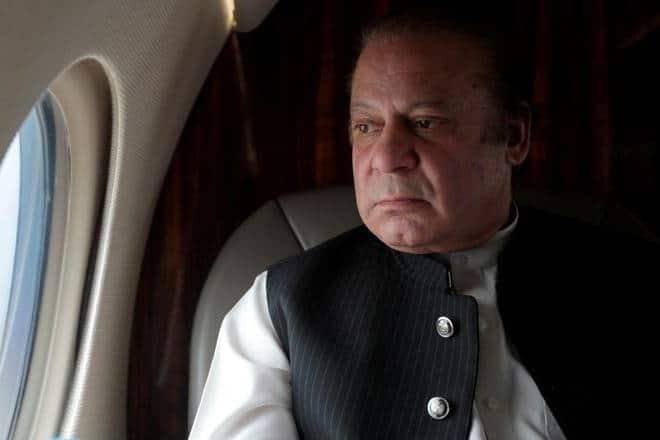 Sharif, 68, is currently in London attending to his wife Kulsoom Nawaz who was diagnosed with throat cancer last year. (Reuters)

Pakistan’s deposed premier Nawaz Sharif was today sentenced in absentia to 10 years of rigorous imprisonment by an anti-graft court in one of the three corruption cases against him in the Panama Papers scandal, dealing a huge blow to his party ahead of the elections on July 25. Sharif’s 44-year-old daughter and co-accused Maryam was given seven years of rigorous imprisonment and a fine of two million pounds, while her husband Capt (Retd) Muhammad Safdar was jailed for one year for not cooperating with the anti-graft authorities.

Amid tight security, the court delivered the much-anticipated verdict after postponing it for five times during the day in the Avenfield corruption case — pertaining to the ownership of four flats in the posh Avenfield House in London. The National Accountability Bureau (NAB) had filed the case, along with two others, on the Supreme Court’s directives in the landmark Panamagate verdict last year which disqualified Sharif, the three-time prime minister.

Sharif, 68, is currently in London attending to his wife Kulsoom Nawaz who was diagnosed with throat cancer last year. The ruling came weeks before the general elections in Pakistan on July 25 and analysts say it could adversely hit the Pakistan Muslim League-Nawaz (PML-N), the party headed by Sharif.

After the verdict, Maryam and Safdar were disqualified from contesting elections. NAB Deputy Prosecutor General Sardar Muzaffar Abbasi said the accused have 10 days to file an appeal against the verdict. Soon after the verdict, Maryam, considered to be Sharif’s heir apparent, took to Twitter to share this message: “This is a very small punishment for firmly standing in front of unseen forces. The moral to fight against oppression has increased today.”

Islamabad-based accountability court judge Mohammad Bashir pronounced the verdict behind closed doors. Earlier, he had rejected the application of the Sharif family seeking a seven-day postponement in the announcement of the verdict. “The court sentenced Sharif to 10 years rigorous imprisonment and fined eight million pounds (over USD 10 million). Maryam was given seven years of rigorous imprisonment and imposed two million pounds (over USD 2.6 million) and her husband Muhammad Safdar was awarded one-year rigorous imprisonment,” the NAB prosecution team chief Sardar Muzaffar Abbasi told media outside the court.

The court also ordered confiscation of Avenfield apartments in favour of Pakistan. The fine money will go into the state treasury. “I congratulate my all prosecution team… It is a victory of the NAB prosecution,” Abbasi said. He also said that the verdict showed that Avenfield apartments were purchased with corruption money and were in the ownership of Sharif family since 1993. According to media reports, Sharif and Maryam were in their apartment in the Avenfield building in London when the decision was announced.

Besides Sharif, his daughter Maryam and son-in-law Safdar, his sons Hassan and Hussain were also co-accused. The two sons never appeared before the court and were declared as absconders. Sharif resigned as Pakistan prime minister last year after the Supreme Court disqualified him from holding public office and ruled that graft cases be filed against the beleaguered leader and his children over the Panama Papers scandal.

The Avenfield case hearing lasted for more than nine months and both Sharif and his daughter attended dozens of hearings. During the trial, the NAB presented around 21 witnessed to prove that Sharif family cannot justify the money trail to buy four apartments in Avenfield House, Park Lane, London. It is alleged that the properties were allegedly bought with grant money in 1990s when he served twice as the prime minister.

Sharif rejected any wrongdoing and insisted they were bought with the legitimate money. After the conviction, it was not sure if Sharif and Maryam would come back to face rigorous imprisonment. Analysts believe that if they return, it might boost the chances of good showing in elections by the PML-N due to the sympathy vote.

Sharif’s nemesis Imran Khan of Pakistan Tehreek-i-Insaf (PTI) said even before the verdict that Sharif will be sent to jail due to his corruption, as he accused him of using illness of his wife Kulsoom as “emotional blackmail”. “Sharif did not remember his wife while she was under treatment in London and he was holding public meetings across the country,” the cricketer-turned-politician said.