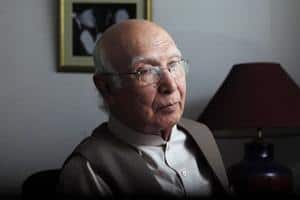 The adviser hinted at a proposal of declaring Gwadar and Chabahar as ‘sister ports’ and said Pakistan was also constructing a road to the Iranian port being developed by India, Iran and Afghanistan. Aziz added that Pakistan has suffered 60,000 casualties of which about 10,000 are those of security personnel.

Commenting on the implementation of Pakistan’s anti-terror programme, Aziz said it had been successfully implemented followed by the on-going National Action Plan (NAP). He said being a nuclear power and a stable economy, Pakistan would sail smooth and move forward by overcoming the current issues.