Express Tribune that one of the organisations which have circumvented the government’s restrictions by rebranding themselves is LeT, led by 2008 Mumbai attack mastermind Saeed, which was banned in 2002. 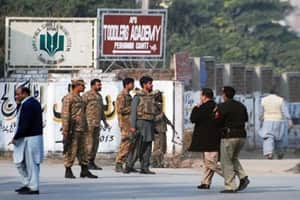 Pakistan has failed to take concrete action to keep a lid on banned militant outfits like Hafiz Saeed-led Lashkar-e-Taiba and Jaish-e-Mohammad which continuously resurface under new names challenging the government's authority. (reuters)

Pakistan has failed to take concrete action to keep a lid on banned militant outfits like Hafiz Saeed-led Lashkar-e-Taiba and Jaish-e-Mohammad which continuously resurface under new names challenging the government’s authority, a media report said today.

Under the Anti-Terrorism Act of 1997, it is the job of the Interior Ministry to determine whether any group is to be banned, but it should also keep tabs on such organisations and prevent them from re-emerging, the Express Tribune reported.

However, the ministry has failed to take concrete action to restrain actions of groups beyond adding their name to a central list, the daily said “The ministry presented a list of banned organisations to the Senate in December 2015 with 61 names on it. That list has not been updated since nor has it been made available to the public,” it said.

The daily said that one of the organisations which have circumvented the government’s restrictions by rebranding themselves is LeT, led by 2008 Mumbai attack mastermind Saeed, which was banned in 2002.

“The group and Saeed were able to reinvent themselves under the banner of Jamaat-ud-Dawa (JuD) and expand their operations into a vast charity network as well,” the daily said.

It said despite being sanctioned by the United Nations, the government has only kept the outfit on “observation” while its chief “Saeed continues to headline events across the country delivering public speeches.”

Another such entity is JeM, accused of carrying out deadly attacks in India, which was first banned on January 22, 2002, the report said.

“It did not take long for the group to resurface under the new name of Khuddam-ul-Islam. The government banned that group on November 15, 2003. However, the group has continued to operate in the shadows.”

Another group surviving the ban is anti-Shiite Sipah-e-Sahaba Pakistan (SSP), which was first banned on January 22, 2002, the report said, pointing that the outfit resurfaced as Millat-e-Islami before the government banned that iteration in November 2003. But it did not deter the group who managed to reinvent itself as the Ahl-e-Sunnat Wal Jamaat (ASWJ), the daily said.

“Though the ASWJ was banned on February 15, 2012, it has continued to flout that ban by staging sporadic activities across the country without much fear of retribution from the state,” it said.

“Poor enforcement of law is the lead cause of such issues,” the daily said quoting Imtaiz Gul, the executive director of Centre for Research Security Studies (CRSS).

He added that the seventh point of the government’s National Action Plan (NAP) also specifically deals with re-emergence of proscribed organisations under different names.

“These outfits don’t require registration to operate and they rename themselves to avoid surveillance from security agencies,” Gul said.

“We have an existing framework of law and the only thing we need is enforcement of law through consolidated efforts,” he said.