Pakistan on Thursday expressed concern over “growing strategic ties” between India and the US, with a top official accusing… 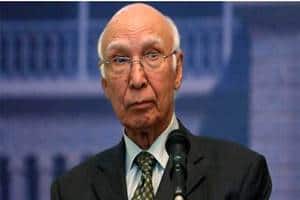 Pakistan on Thursday expressed concern over “growing strategic ties” between India and the US, with a top official accusing Washington of using Islamabad “whenever it needs it”.

The outburst by Sartaj Aziz, the Advisor to the Prime Minister on Foreign Affairs, came after the US strongly backed India’s bid for membership to the NSG.

The US backing came at a meeting between Indian Prime Minister Narendra Modi and President Barack Obama in Washington on Tuesday during which the two sides also inked agreements to boost security and defence cooperation.

Addressing the media here, Aziz said: “The US approaches Pakistan whenever it needs it and abandons it when it does not need Islamabad.

“Pakistan will convey its concerns to US over the latest issues in the bilateral ties,” Aziz said, adding that a high-level meeting was planned between Pakistan and US officials on June 10 in Islamabad.

“We firmly conveyed to the US that maintaining effective nuclear deterrence is critical for Pakistan’s security and only Islamabad can determine how it should respond to growing strategic imbalance in South Asia.”

Aziz maintained that Islamabad was ready for cordial relations with other countries including India.

Aziz’s statement comes as Islamabad stepped up its diplomatic outreach among members of the Nuclear Suppliers Group in a bid to stall New Delhi’s chances of gaining membership to the NSG.

The Pakistan foreign ministry’s UN Desk on Wednesday held a briefing in Islamabad for diplomatic missions of NSG member-countries to put forward its argument against India’s membership and to push for its own entry to the elite group.

At the meeting, Pakistan warned that country-specific exemptions could negatively impact strategic stability in South Asia.

Both Pakistan and India have applied to be members of the 48-member NSG that regulates global nuclear commerce.

India is being backed in its bid by several major NSG members, including the US.

However, China is backing Pakistan. Beijing maintains that if India, a non-signatory to the Nuclear non-Proliferation Treaty, is given membership, then Pakistan too should be taken on board.

More Stories on
PakistanSartaj Aziz
Next Story
George Soros says expects support for ‘In’ to rise ahead of Britain’s EU referendum: WSJ