Novak Djokovic is a Serbian professional tennis player. He is currently ranked as World No.1 by the Association of Tennis professionals (ATP). 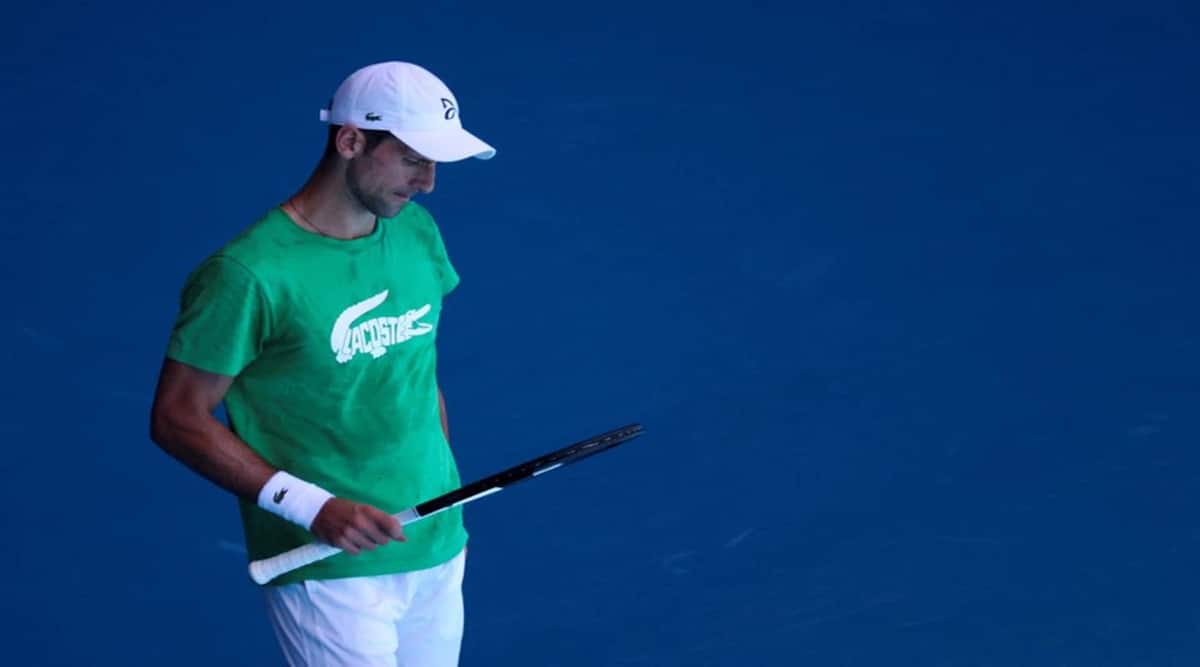 Serbian tennis player Novak Djokovic practices at Melbourne Park as questions remain over the legal battle regarding his visa to play in the Australian Open in Melbourne, Australia, January 13, 2022. (Photo source: Reuters)

The Australian Open begins on 17 January in Melbourne. The fate of Novak Djokovic, the top seeded player, and an opponent of Covid 19 vaccination, hangs in the balance. His visa was initially cancelled by the Australian border authorities but later reinstated by a local court. The entire episode has become a major debating point over Covid 19 vaccine mandates.

Novak Djokovic is a Serbian professional tennis player. He is currently ranked as World No.1 by the Association of Tennis professionals (ATP). He has been No.1 for a record total of 355 weeks and has finished as ATP Year end No.1 on a record seven occasions. He began his professional career in 2003. At age 20, he disrupted Roger Federer’s and Rafael Nadal’s stream of 11 consecutive majors to win his first Grand Slam title at the 2008 Australian Open.

Novak Djokovic was born on 22 May 1987 in Belgrade, Serbia to Srdan and Dijana Dokovic. He father is of Serbian ancestry and mother of Croatian ancestry. His two younger brothers, Marko and Djordje, have also played professional tennis.

As a young child, he was given a mini racket and a soft foam ball by his parents, which his father claimed, became ‘the most beloved toy in his life’. He began playing tennis at the age of 4, when his parents sent him to a tennis camp in Novi Sad, the second largest city after Belgrade.  His tennis was overseen by tennis player Jelena Gencic at Mount Kopaonik, where his parents ran a food and sports equipment business. Upon seeing the child Djokovic playing tennis, she is said to have stated, ‘this is the greatest talent I have seen since Monica Seles.’ At the age of 12 he moved to the Pilic tennis academy in Germany and at the age of 14 he began his international career, winning European championships in singles, doubles and team competition. He is mostly resident in Monte Carlo.

He is a self-described fan of languages, speaking Serbian, English, French, German, and Italian. He met his future wife, Jelena Ristic, in high school and began dating her in 2005, and married in 2014 in Montenegro. Their first child, a son, was born in 2014 and the second, a daughter, in 2017.

Off the court he founded the Novak Djokovic Foundation to help children from disadvantaged sections to grow up and develop in a stimulating and safe environment. The foundation partnered with World Bank in August 2015 to promote early childhood education in Serbia. His foundation has built 43 schools ad supported almost 20,800 students and a thousand families.

He donated money from charity matches towards construction of Avala Tower (damaged in the 1999 Nato bombing of Serbia), as well as to aid victims of the 2010 Haiti earthquake and 2010-11 Queensland floods. Starting in 2007, he has established a tradition of hosting and socializing with hundreds of Kosovo Serb children during Davis Cup matches organized in Serbia. He was selected as the 2012 Arthur Ashe Humanitarian of the year, for his contribution through the foundation, his role as a UNICEF national ambassador and other charitable projects. In Aug 2015 he was appointed UNICEF Goodwill Ambassador. During the 2014 Balkan Floods, he mobilized support for victims in Bosnia, Croatia and Serbia. After winning the 2014 Rome Masters he donated his prize money to the flood victims in Serbia, while his Foundation collected another $ 600,000. Following his 2016 Australian Open victory, he donated $20,000 to the Melbourne City missions’ early childhoods education programme. He had become quite a sensation of late when during his various matches he on the spot gifted his winning racquets to eager young fans.

After the Covid 19 spread to Serbia in March 2020, he and his wife announced donation of $1m for the purchase of ventilators and medical equipment to support hospitals. He also donated to Bergamo, Italy, one of the worst affected Italian provinces, as well as to Novi Pazar, Serbia and North Mitrovica, Kosovo.

Novak endorses several brands including the Serbian telecommunications company telekom Serbija and German nutritional supplement brand FitLine. Since turning professional in 2003, he has been wearing clothing and shoes from Adidas and Tacchini clothing. From 2011, he became brand ambassador of Swiss Audemars Piguet, and Mercedes-benz, and Bombardier’s Learjet brand ambassador; since 2014 has been endorsing French Peugeot, and Seiko, apart from Lacoste, Uniqlo etc. Chains of Novak café and restaurants run in Novi Beograd. Undoubtedly, he is the biggest Serbian brand abroad.

A noted opponent to the Covid 19 vaccine, Novak was briefly denied entry to Australia after the Australian border control noted an error in his medical exemption. He also produced medical records that showed he had a positive Covid test in December, creating more controversy for a country with strict travel policies in place amid the pandemic. He was later held in a Melbourne hotel for immigration detainees while the courts decided whether to allow him into the country. He ultimately won an appeal to enter the country and compete in the Australian Open, creating yet more controversy for those who have been affected by reduced travel in and out of the country.

He recently issued a lengthy statement attempting to clarify misinformation regarding his attempt to enter the country-notably how he had already tested positive for Covid while attending a children’s tennis event in Belgrade in mid-December, he claimed to not know he was positive at the time, only receiving word of his positive test after the event had occurred. Moreover, he apologized for conducting an interview with L’Equipe- a French daily newspaper-around the same time, while still knowingly positive. Despite taking proper precautions to socially distance during the interview, he conceded that he should have rescheduled. Novak also acknowledged his agent made an error in a travel declaration about his movements in the two-week period leading upto the January 5 travel to Australia which could become a deciding factor. He also said he would no longer speak on the issue.

Novak Djokovic has won the Australian Open nine times previously, more than any other Grand Slam event. A win in 2022 tournament would give him 21 Grand slam titles, moving him past Roger Federer’s and Rafael Nadal’s marks of 20 titles apiece.

Be that as it may, Novak could still have his travel visa canceled if Australian immigration minister decides to exercise his personal power to remove Novak from the country. That would bar Djokovic from entering Australia for three years, though the decision is still pending. According to local authorities who had initially denied visa, Novak had failed to provide appropriate evidence and that a prior infection was not a valid reason to enter without a vaccination. A second Australian open hopeful Renata Voracova from the Czech Republic has now left the country after having her visa cancelled. She had entered on visa exemption and had had Covid recently.

Australia’s pandemic border rules out foreigners from entering the country if they are not either double vaccinated or have a medical exemption from having the jabs. While foreigners can fly into Australia on a visa applied online, they must still clear immigration customs on arrival at the airport. The Serbian Prime Minister, Ana Brnabic, has, according to reports, interceded with the Australian government. Serbia is a sport loving nation and takes a lot of pride in Novak. His supporters are criticizing Novak’s treatment as a political tool by the Australian government, which faces sharp criticism as the Omicron crisis worsens, and the country is due for a federal election in May this year. On the other, his critics are decrying the special treatment for the celebrity.

(The author is a former Indian ambassador to Republic of Serbia. She tweets:@nchauhanifs Views expressed are personal and do not reflect the official position or policy of Financial Express Online. Reproducing this content without permission is prohibited).

Next Story
US and allies urge North Korea to abandon nukes, missiles