Muhammad Ali was one of the greatest athletes of all time, but he didn’t cash in during his prime the way you’d expect today… 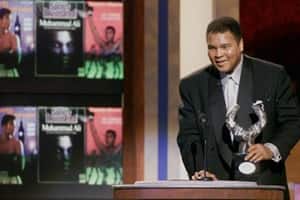 In the turbulent 1960s and 1970s, his political activism and racial pride made many advertisers wary. (Reuters)

Muhammad Ali was one of the greatest athletes of all time, but he didn’t cash in during his prime the way you’d expect today. Product endorsements deals for the boxer were scarce, and in fact his most notable commercial during his earlier years was for a roach trap .

In the turbulent 1960s and 1970s, his political activism and racial pride made many advertisers wary. But it was also a different era in which athletes weren’t generally rich role models and advertising itself focused largely on bland mass-market products.

”There was so much less money in things like sports and sponsorships at the time,” said Mike Lewis, Emory University marketing professor. ”If he had that level of stature now, he could be a multibillion dollar marketing entity.”

Ali was a genius at self-promotion, and his brand – the ”Greatest of All Time,” as he labeled himself – remains unparalleled in sports. In 2016, decades after he stopped boxing, Muhammad Ali was tied – with Michael Jordan and Tom Brady – for No. 1 in `familiarity’ on Marketing Evaluations’ annual sports Q ratings, which measures various aspects of athlete and celebrity marketability. He was more familiar to 18- to 34-year olds than some the most popular current athletes including LeBron James, Serena Williams and Peyton Manning.

So why didn’t that translate into Jordan-level of endorsements? The former Chicago Bulls star, the most successful sports-star pitchman of all time, is estimated to be worth hundreds of millions due to his lucrative Nike Jordan brand and other deals. But Ali was in a different league from the beginning.

Ali was known globally, but global endorsements didn’t really exist yet. Up until the early 1980s, athlete sponsorship deals tended to much smaller in scope. Baseball legend Joe DiMaggio promoted Mr. Coffee; star quarterback Joe Namath even did an ad for Hanes pantyhose.

Muhammad Ali’s politics might have stymied some deals, too. The boxer was stripped of his title and boxing license for refusing to enter the army during the Vietnam War and didn’t enter a boxing ring for three years at the height of his career.

”There’s a lot of conservatism in corporate America,” Katz said. Ali’s diagnosis of Parkinson’s disease in 1984 likely slowed him down as well.

Still, in the past decade and a half, the marketing world finally seemed to catch on to the power of being linked to Muhammad Ali. He was featured on a Wheaties box in 1999, long after he retired, but was still the first boxer to appear there. In 2004, he and his daughter Laila were part of Adidas’ global brand campaign ”Impossible is Nothing .”

He has appeared in ads for Pizza Hut, Apple and Porsche and was featured in Toyota’s 2015 Super Bowl commercial, ”How Great I Am .”

In 2006, Ali sold 80 percent of the marketing rights to his name and likeness to entertainment and licensing firm CKX for a reported $50 million dollars. The brand changed hands several times and is now managed by Authentic Brands Group, which has inked several licensing deals including partnering with Under Armour on a clothing line featuring his likeness. The clothes, shoes, and accessories debuted last fall and were promoted with a campaign that relied heavily on famous photos and video of Ali.

Under Armour and Authentic Brands Group did not return a request for comment on the future of the line. But demand for Ali’s iconic image in the marketing world is not likely to fade soon. Iconic stars like Marilyn Monroe, Elvis and Frank Sinatra have been featured in ads long after their deaths.

”He’ll always be known as quote unquote `The Greatest,’ so if you’re a brand it’s a great association to have,” Columbia’s Katz said.