NASA, US space agency, has released some mind-blowing images of the world’s biggest solar farm which is built by China. 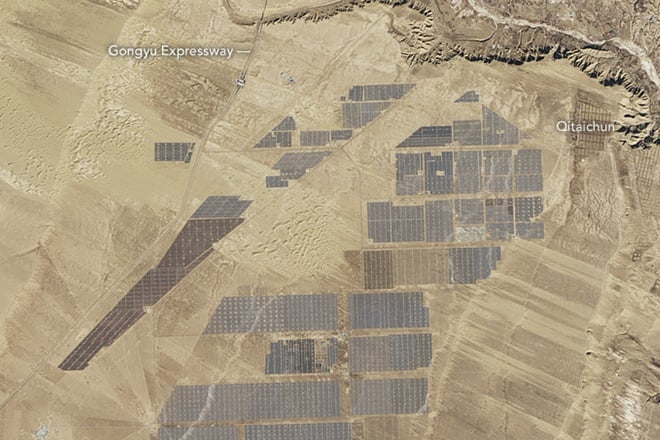 The solar farm sits on the Tibetan Plateau in China and has the capacity to power 200,000 households. (Image: NASA)

NASA, US space agency, has released some mind-blowing images of the world’s biggest solar farm which is built by China. The solar farm sits on the Tibetan Plateau in China and has the capacity to power 200,000 households. The Longyangxia Dam Solar Park in northwestern China’s Qinghai province is operated by State Power Investment Cooperation, one of China’s top five power generators, according to People’s Daily, China. Built at a cost of about 6 bn yuan (£721.3m) and in almost constant expansion since construction began in 2013, Longyangxia now has the capacity to produce a massive 850MW of power – enough to supply up to 200,000 households, says The Guardian.

The Longyangxia Dam Solar Park is China’s latest in a long line of large-scale solar energy projects. A solar farm in the city of Cixi in eastern Zhejiang province made the news recently for installing 300 hectares of solar panels above a fish farm. The farm is expected to generate 220-gigawatt hours of electricity a year – enough power for 100,000 households – according to the state-run Xinhua news agency.

“In the past few years, the title of “largest solar farm in the world” has been a rather short-lived distinction. For a period in 2014, the Topaz Solar Farm in California topped the list with its 550-megawatt (MW) facility. In 2015, another operation in California, Solar Star, edged its capacity up to 579 MW. By 2016, India’s Kamuthi Solar Power Project in Tamil Nadu was on top with 648 MW of capacity. As of February 2017, Longyangxia Dam Solar Park in China was the new leader, with 850 MW of capacity,” said NASA in a statement.

Also Read
Explosions rock Ukrainian cities as Russia launches ‘more than 100 missiles’ in waves
6.0 earthquake strikes off coast of Ecuador
The Multi Domain Threat beyond Yangtse
Year-Ender | Top world events no one expected in 2022 but made headlines and changed the course of history

These images, both of which were acquired by the Operational Land Imager (OLI) on Landsat 8, show how the solar park grew over a four-year period.

The rapid expansion at Longyangxia coincides with China’s fast-growing solar power sector. In 2016, China’s total installed capacity doubled to 77 gigawatts. That pushed the country well ahead of other leading producers—Germany, Japan, and the United States—to become the world’s largest producer of solar power. However, those three countries (and several others) produce more solar power per person.