Latin America, a destination of future fuel on the planet 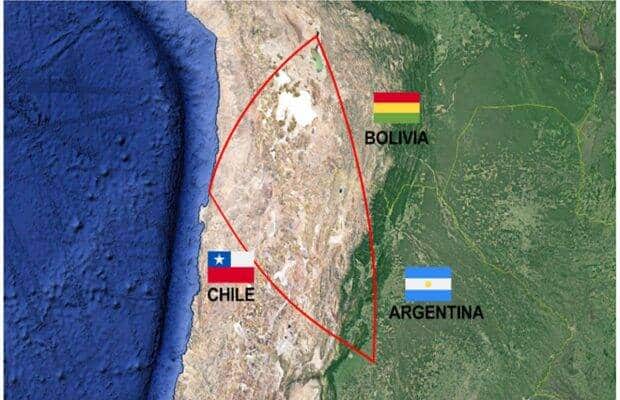 Lithium is a fundamental mineral for the global energy transition, in particular with regard to its use in the battery industry for cell phones, laptops and electric cars. Today, China leads over 30 percent of the world’s electronics trade, also monopolizes the market for supplies and raw materials (mainly lithium) for batteries which accounts for 77 percent of the world’s capacity to manufacture lithium batteries.

According to Secretaría de Minería del Ministerio de Desarrollo Productivo (English: Mining Secretariat of the Ministry of Productive Development), currently there are two projects in operations, SALES DE JUJUY (Orocobre 66.5 percent, Toyota Tsusho 25 percent and JEMSE 8.5 percent) and MINERA DEL ALTIPLANO. In addition, there are 18 advanced projects and others are under construction. These activities are mainly located in the Northwestern region of Argentina. These advanced projects could reach 350000 tons per year. Between 2017 – 2020, the total accumulated investment was nearly $1,118 million USD in Lithium projects.

On 27th  May 2021, the statement of the Interuniversity Forum of Argentinian, Lithium Specialists expresses concern about the expectations of growth of lithium extraction in Argentina in the current legal-political framework. In relation to the development of the local value chain, it affirms that under current legislation, companies have no obligation to add value to their production at the local level and that there is no national policy that articulates the capacities to increase the industrialization of the lithium that is extracted from the salt flats of the Northwestern Argentina.

On 14th  May 2021, signing of the Memorandum of Understanding between the National Ministry, the Jujuy provincial government and the Chinese company Ganfeng Lithium Co. Ltd in order to install a lithium battery factory for sustainable mobility. In addition, they agreed to advance in the identification of investment opportunities in lithium exploitation activities.

On 8th  March 2021, MoU signed with Chinese company Jiankang Automobile Co. to promote the manufacturing of Lithium Batteries and urban passenger transport vehicles. Also in the same month, the German Automaker BMW announced the signing of a contract with the American company Livent, based in Catamarca, of $334 million USD for the production of lithium batteries for its electric cars, for which Argentina will become its second supplier of lithium from 2022, behind Australia.

The Chilean government is making a plan to expand its influence in the global lithium market and looking to bring more funds into public coffers by inviting more companies to avail its substantial lithium reserves. On 13th  October, Chile announced plans to greenlight auctions for five new lithium developments, each with a quota for 80,000 tons of lithium metal equivalent annually, potentially unlocking lithium reserves beyond the country’s largest salt flat (Spanish: Salar).

The new projects, which could take a decade to get into production, could contribute as much as 100,000 tons of lithium carbonate equivalent to the global market annually, increasing Chile&#39;s production by 71 percent above in 2021 forecast levels, according to S&P Global Market Intelligence.

Sociedad Química y Minera (SQM), Chilean chemical company based in Santiago, is the fourth largest lithium miner in the world, obtained revenues of revenues of US$1,943.7 million dollars gross profit of US$560.1 million and profit attributable to controlling interests of US$278.1 million at year ended December 31, 2019, where Albemarle based in North Carolina (USA) is a fine chemical manufacturing company and operates in three divisions: Lithium, Bromine Specialties and Catalysts. It is one of the largest suppliers of lithium for electric vehicle batteries.

Bolivia, a landlocked country reserves of 21 million tons of lithium of the world, most of it found in Salar de Uyuni (English: Salt Flat of Uyuni) in the Andean region of Potosí, and to a lesser extent in the deposits of Pastos Grandes, Potosino, and Coipasa, shared between the department of Oruro and Chile. The State controls 100 percent of these three salt flats.

In Bolivia, one of the main problems is the lack of technology for the direct extraction of lithium (EDL) and the recovery of projects stopped after the coup.

The Bolivian government is looking to develop a vertically integrated supply chain within Bolivian local ownership, rather than having international companies exporting raw materials. It has produced 4,000 lithium batteries so far this year, with a target to reach 8,000 by the end of the year for energy storage in solar photovoltaic systems, power banks, and electric vehicles, YLB (Yacimientos de Litio Bolivianos, created in 2017, is a state decentralized company, under the Ministry of Energy of Bolivia) said.

On 30 th  April 2021, the Bolivian government launched international proposals to develop deposits in the salt flats of Uyuni, Coipasa and Pastos Grandes. It is evaluating the companies to ensure they meet its conditions. After that on 14th  August, YLB announced a tender to sell 120 ton of spot technical-grade 98.5 percent lithium carbonate with the winning bid selected on 23 rd  August. That follows the sale of 100 ton in June, 530 ton in March and 770 ton in January.

Currently, Bolivia has plants for the industrialization of salts and potassium chloride, also a pilot plant for lithium carbonate and another larger-scale one is under construction, which is expected to produce some 15,000 tons. It also has a pilot plant for cathode materials and plans to open another lithium-ion battery plant and a research and technology center in Potosí shortly. Although, on 23 rd  May 2021, Bolivian government report reveals that the economic losses due to the interruption of the sale of potassium chloride and lithium carbonate during the de facto government amount to 131 million bolivianos.

YLB has been running a pilot operation, producing several hundred tons of lithium carbonate per year. In the first half of 2021, YLB generated income of more than 81 million bolivianos ($11.7 million) from the sale of potassium and lithium carbonate to the national and international markets. The company expects to reach Bs120mn by the end of August and Bs160mn by the end of the year.

Discovery of lithium reserves in Peru, in the southeast region of Macusani in Puno. The main problem is that lithium is associated with uranium. The field is estimated to have 4.7 million tons.

12 th  May 2021, American Lithium completed the acquisition of all the common shares of its compatriot Plateau Energy, parent company of Macusani, a mining company that operates and manages the Falchani lithium project and the Macusani uranium project, in the Puno region. In February 2021, Macusani sold the project to Americas Lithium on the Canadian Stock Exchange. 5 th  February 2021, presentation of a bill to declare public necessity the promotion and encouragement of the industrialization of lithium and uranium. The project declares that the prospecting, exploration and exploitation, benefit, refining, processing, commercialization and industrialization activities of the two minerals are strategic throughout the Peruvian territory.

In 2018, discoveries by the Bacanora Lithium company in the Sierra Madre Occidental de Sonora (Mexico) declared to have found 243.8 million tons, which catapults this project as one of the largest in the world. The mining concession in the town of Bacadéhuachi is held by Sonora Lithium (SLL), a joint venture (JV) of Canadian Mining Company Bacanora Minerals (77.5percent) and Chinese Company Ganfeng Lithium (22.5 percent).

Bacanora in the extraction process and Gangfeng in the production process of lithium carbonate estimate that they will start their operations in 2023. The company estimates for the first year an estimated production of 17,500 tons that is already committed to the Japanese company Hanwa.

The Ministry of Economy reported that Mexico is preparing its first electric battery factory, which will be installed by a private company, although it does not want to reveal the name, but this will be key for the country to comply with established automotive industry standards at the T-MEC. Also in February 2021, the Mexican government announced that the four lithium sites identified 11 potentials, through the Mexican Geological Service, which are located in Sonora, Jalisco and Puebla. With this, the viability of the extraction will be evaluated.

Clause T-MEC, previously the North American Free Trade Agreement (NAFTA) requested 62.5 percent in the manufacture of vehicles; now, Chapter 4 of the T-MEC raises the content to 66 percent, gradually increasing each year, until reaching 75 percent. That means that for electric cars the challenge now is batteries, because the US is not self-sufficient in this area After that in April 2021, Morena presented an initiative in the Senate inspired by the Bolivian model of nationalization so that the benefits remain in Mexico. According to the CELAG survey of April (2021), nearly 70.2 percent of the population agrees that the State should manage all natural resources. Bacanora Mining sold stakes in its second most important project in Germany and achieved the financial collection of 65 million dollars to reach the 450 million it needs to start up the lithium plant. It expects to have production by 2023.

Bacanora Lithium paid 7 million pesos for 3,000 hectares, the income that they expect to obtain profits of 1,200 million dollars. In Mexico the problem is extraction costs, since lithium is associated with clay. In addition to the nationalization proposal that was not received in Congress and the TMEC clauses that link Mexican industry to North America. The former Secretary of the Economy, Graciela Márquez affirmed in October 2020 that the lithium deposits in Sonora are not the largest in the world, they have clay and extraction is very expensive.

(The author is Director of International trade and Investment of Grupo 108, also Latin American and the Caribbean Countries Market Expert, Email: intolatam@gmail.com. Views expressed are personal and do not reflect the official position or policy of the Financial Express Online.)

Next Story
The refugee crisis at Belarus-EU border