The two leaders spoke frankly for nearly an hour amid growing alarm over Russia’s troop buildup near Ukraine, a crisis that has deepened as the Kremlin has stiffened its insistence on border security guarantees and test-fired hypersonic missiles to underscore its demands. 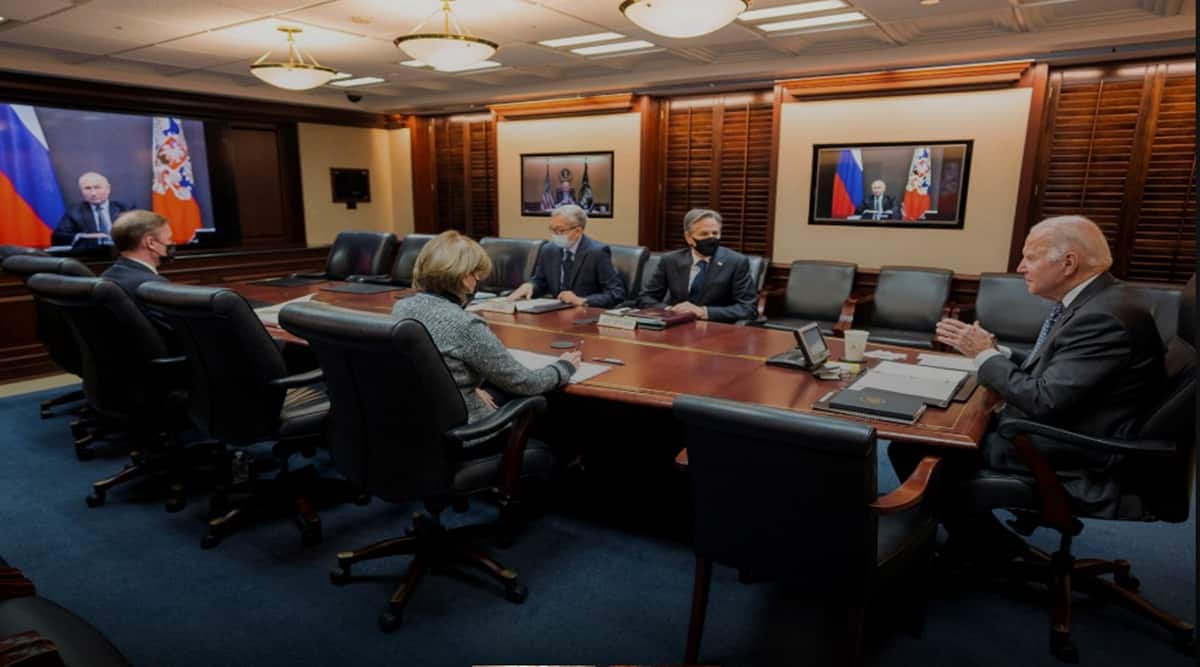 President Joe Biden warned Russia’s Vladimir Putin on Thursday that the U.S. could impose new sanctions against Russia if it takes further military action against Ukraine, while Putin responded that such a U.S. move could lead to a complete rupture of ties between the nations.

The two leaders spoke frankly for nearly an hour amid growing alarm over Russia’s troop buildup near Ukraine, a crisis that has deepened as the Kremlin has stiffened its insistence on border security guarantees and test-fired hypersonic missiles to underscore its demands. Further U.S. sanctions “would be a colossal mistake that would entail grave consequences,” said Putin’s foreign affairs adviser Yuri Ushakov, who briefed reporters in Moscow after the Biden-Putin phone conversation. He added that Putin told Biden that Russia would act as the U.S. would if offensive weapons were deployed near American borders.

White House officials offered a far more muted post-call readout, suggesting the leaders agreed there are areas where the two sides can make meaningful progress but also differences that might be impossible to resolve.White House press secretary Jen Psaki said Biden “urged Russia to de-escalate tensions with Ukraine” and “made clear that the United States and its allies and partners will respond decisively if Russia further invades Ukraine.” Putin requested the call, the second between the leaders this month, ahead of scheduled talks between senior U.S. and Russian officials Jan. 9 and 10 in Geneva. The Geneva talks will be followed by a meeting of the Russia-NATO Council on Jan. 12 and negotiations at the Organization for Security and Co-operation in Europe in Vienna on Jan. 13.

White House officials said Thursday’s call lasted 50 minutes, ending after midnight in Moscow.Biden told Putin the two powers now face “two paths”: diplomacy or American deterrence through sanctions, according to a senior administration official. Biden said the route taken, according to the official who briefed reporters on the condition of anonymity, will “depend on Russia’s actions in the period ahead.” Russia has made clear it wants a written commitment that Ukraine will never be allowed to join NATO and that the alliance’s military equipment will not be positioned in former Soviet states, demands that the Biden administration has rejected.

Biden told Putin a diplomatic path remains open even as the Russians have moved an estimated 100,000 troops toward Ukraine and Kremlin officials have turned up the volume on their demands for new guarantees from the U.S. and NATO.White House officials said Biden made clear that the U.S. stands ready to exact substantial economic pain through sanctions should Putin decide to take military action in Ukraine.Putin reacted strongly.He “noted that it would be a mistake that our ancestors would see as a grave error. A lot of mistakes have been made over the past 30 years, and we would better avoid more such mistakes in this situation,” Ushakov said.

Russia’s demands are to be discussed during the talks in Geneva, but it remains unclear what, if anything, Biden would be willing to offer Putin in exchange for defusing the crisis.Draft security documents Moscow submitted demand that NATO deny membership to Ukraine and other former Soviet countries and roll back military deployments in Central and Eastern Europe.

The U.S. and its allies have refused to offer Russia the kind of guarantees on Ukraine that Putin wants, citing NATO’s principle that membership is open to any qualifying country. They agreed, however, to hold talks with Russia to discuss its concerns.The security proposal by Moscow has raised the question of whether Putin is making unrealistic demands in the expectation of a Western rejection that would give him a pretext to invade.

Steven Pifer, who served as U.S. ambassador to Ukraine in the Clinton administration, said the Biden administration could engage on some elements of Russia’s draft document if Moscow is serious about talks.Meanwhile, key NATO members have made clear there is no appetite for expanding the alliance in the near future. The U.S. and allies could also be receptive to language in the Russians’ draft document calling for establishing new consultative mechanisms, such as the NATO-Russia Council and a hotline between NATO and Russia.

“The draft treaty’s proposed bar on any NATO military activity in Ukraine, eastern Europe, the Caucasus, or Central Asia is an overreach, but some measures to limit military exercises and activities on a reciprocal basis might be possible,” Pifer, who is now a senior fellow at Brookings Institution, wrote in an analysis for the Washington think tank.

Biden and Putin, who met in Geneva in June to discuss an array of tensions in the U.S.-Russia relationship, are not expected to take part in the January talks.Last week, Russia test-fired Zircon hypersonic missiles, a move Russian officials said was meant to help make Russia’s push for security guarantees “more convincing.” The test was the first time Zircon missiles were launched in a salvo, indicating the completion of tests before the new missile enters service with the Russian navy next year and arms its cruisers, frigates and submarines.

U.S. intelligence earlier this month determined that Russian planning was underway for a possible military offensive that could begin as soon as early 2022, but that Putin had yet to determine whether to move forward with it.Oleksiy Danilov, the secretary of Ukraine’s Security and Defense Council, said Thursday his country believes there is no immediate threat of a major Russian invasion.

“Our experts say that the Russian Federation just physically can’t mount a big invasion of our territory,” Danilov said. “There is a time period needed for preparations.” The U.S. military has flown surveillance flights in Ukrainian airspace this week, including a flight Thursday by an Air Force E-8C JSTARS aircraft, according to Chuck Pritchard, a spokesman for U.S. European Command. That plane is equipped to provide intelligence on ground forces.

Russia has denied any intention of launching an invasion and, in turn, has accused Ukraine of hatching plans to try to reclaim control of territories held by Moscow-backed rebels by force. Ukraine has rejected the claim.

US Stock Market
S&P 500 to reach 5050 on continued robust earnings growth, says J.P. Morgan
Fund Managers maintain bullish stand on stocks, BofA survey shows; expect inflation to fall in 2022
Nasdaq 100: What strategists see for US stock market as treasury yields spike
NASDAQ Composite Index down by nearly 8% from 52-week highs – Check details
US Federal Reserve losing its fight against inflation, says Bill Ackman, wants 50 bps rate hike
View All
Latest News
Q3 Result: YES Bank PAT rises 77% to Rs 266 cr on back of lower provisions
‘Earlier there were monologues. Now there is a voice talking back’
Better than most: Meet Akshay Bhatia, brightest Indian-origin talent in the world right now
Rights and duties: ‘What is worrying PM Modi so much…’
Across the Aisle by P Chidambaram: No political price yet
Nepal, Egypt, Italy to Kenya – A look at Republic Days around the world
Young voices: More and more children are coming forward as opinion makers
Most Read
The era of smart savers: How fintech industry is revolutionising finance in India
The digital fence | Book excerpt – The Art of Bitfulness: Keeping Calm in the Digital World by Nandan Nilekani & Tanuj Bhojwani
BTS to Bollywood: The irrefutable power of social media and new-age celeb connections
The only constant | Book Review – How to Change: The Science of Getting from Where You Are to Where You Want to Be By Katy Milkman
Photos
In Pictures: Indian Army patrols in heavy snow in Jammu and Kashmir’s Poonch
3 days agoJanuary 20, 2022
Share
Satellite images show huge damage in Tonga; Scientists say this underwater volcanic eruption may harm environment for years
5 days agoJanuary 18, 2022
Share
Realme 9i first look, impressions: Design, specs, features, and everything to know
5 days agoJanuary 18, 2022
Share
Read More
×
Russia toughens its posture amid Ukraine tensions
Covid-19: China’s success taming virus could make exit strategy harder
Covid-19: Hong Kong health authorities warn of worsening outbreak
Pakistan vs Afghan Taliban: Tensions on the Durand Line reveal the complications of victory
Drone attacks in UAE and conflict in Yemen
Post-Soviet states increase arms deliveries amid COVID-19 pandemic