US Defense Secretary Jim Mattis today sought waiver from sanctions under CAATSA for countries that are making transition from their military dependence on Russia. 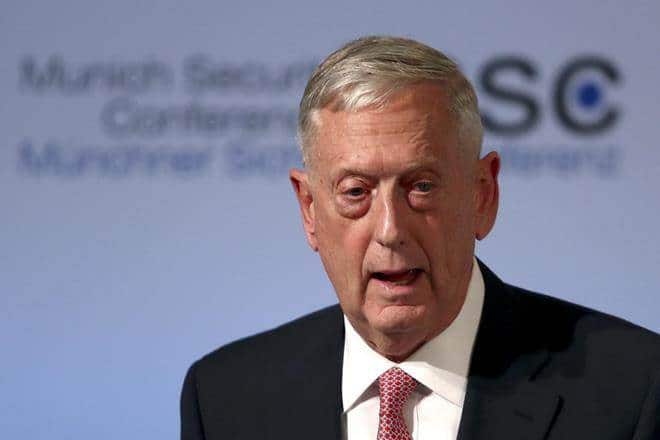 US Defense Secretary Jim Mattis today sought waiver from sanctions under CAATSA for countries that are making transition from their military dependence on Russia, and warned that otherwise such countries would have no option but to turn to Russia.

Mattis, who recently wrote a letter on the matter to Senator John McCain, the chairman of the Senate Armed Services Committee, in a statement demanded that Secretary of State Mike Pompeo be empowered with the authority of issuing waiver to certain countries when it comes to the US sanctions on Russia under the Countering America’s Adversaries Through Sanctions Act or CAATSA.

“Russia should suffer consequences for its aggressive, destabilising behaviour and its illegal occupation of Ukraine. However, as we impose necessary and well-deserved costs for their malign behaviour, providing the Secretary of State with a CAATSA waiver authority is imperative,” Mattis said.

“Doing so allows nations to build a closer security relationship with the US as they continue to transition from reliance on Russian military equipment,” the Defense Secretary said.

“The fundamental question we must ask ourselves is do we wish to strengthen our partners in key regions or leave them with no other option than to turn to Russia, thereby undermining an once in a generation opportunity to more closely align nations with the US vision for global security and stability,” Mattis said.

Mattis’s statement did not mention India, but for all practical purposes he has been seeking waiver for India from the punitive Countering America’s Adversaries Through Sanctions ACT or CAATSA, under which sanctions kick off on countries that purchase significant military equipment from Russia.

Though the act targets Russia, it is having its unintended consequences on India, which is planning to buy five S-400 Triumf air defence systems for around USD 4.5 billion from Russia, that US officials say could be considered as a significant military purchase.

Last week several US lawmakers had said that they were working to get CAATSA waiver for India.

“I’m hopeful that we’re gonna get there on something that will advance our country’s interests and advance India’s interest and build that trust,” Sullivan said as he called for concrete actions in Indo-US defence relationship.

Responding to a similar question at a separate panel, Senator Mark Warner, who is a strong proponent of the CAATSA, said the lawmakers were looking into it and did not want India to suffer its unintended consequences.

“There are some with the view that the bill does allow flexibility. House version gives a little more on the waiver side. We are trying to investigate on the Senate side, how we can allow this military partnership to grow but not undermine the principles around CAATSA,” Warner said in response to a question.

“It would be easier, I say to my Indian colleagues and friends, if this was simply parts of old aircraft that had been purchased 20 years before rather than a USD 4 billion plus air defence system. I do understand as well this was negotiated long before,” he said, adding that this long relationship can’t be broken overnight.

The Indian Ambassador to the US, Navtej Singh Sarna, said India was not the target of the federal law and it should not become collateral damage of it. The administration has to find a way in which they can find a waiver for the partner on this particular thorny issue, he said.

“We are hopeful that given the broad understanding on this issue on the Hill as well as the administrations enthusiasm behind it,” he added.

Mukesh Aghi, the president of the US-India Strategic and Partnership Forum (USISPF), said that there is a very positive momentum in this regard.

“The momentum that I am seeing is positive. The attitude and intentions (of the Trump Administration) are positive. So hopefully, we will have a positive solution (on the CAATSA and Iranian oil sanctions before the next two + two India US Dialogue),” he told PTI last week.