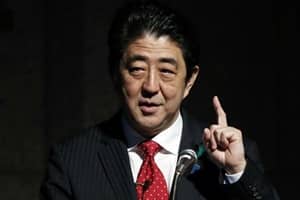 Abe will also need to explain to voters how he plans to make up for the funding gap from the tax hike delay to October 2019, and keep pledges to beef up support for the elderly. (Reuters)

President Barack Obama backed Abe’s call, saying it was crucial not just to put people back to work but also raise wages and maintain the momentum of the recovery.

“We’ve all got a lot of work to do and we agreed to continue to focus on making sure that each country, based on its particular needs and capacities, is taking steps to accelerate growth,” the US president said.

Abe and his counterparts got down to business after a morning stroll through the grounds of Ise Jingu, a tranquil, densely forested shrine that is considered the holiest site in Japan’s indigenous Shinto religion.

During the talks, Abe compared the current global economic situation to conditions just before the 2008 financial crisis. A G-7 summit held in northern Japan paid little attention to the trouble that was brewing, he said.

“We learned a lesson that we failed to respond properly because we did not have a firm recognition of the risks,” Abe told reporters. “This time, we had a thorough discussion and recognized the major risks facing the global economy.”

German Chancellor Angela Merkel said she didn’t expect any concrete offers in the final communique from other G-7 members to take in refugees. She did say, however, that she had a bilateral meeting with Canadian Prime Minister Justin Trudeau and told him how much she appreciates the large number of refugees his country is taking in.

“One has to consider that Canada isn’t right next to Syria and yet it still feels responsible for the problems there,” she said.

Earlier, Donald Tusk, president of the European Council, said “Those who criticize us should rather think how to increase their assistance because what Europe provides is already massive. And honestly speaking, if they (the G-7) don’t take the lead in managing this crisis, nobody else will.

I will appeal to G-7 leaders to take up this challenge.”

He said the EU is seeking more support for refugees and creation of resettlement schemes and other forms of legal migration around the world.

A possible exit from the European Union by Britain, depending on a June 23 vote, is also hanging over the talks. The annual summit brings together the leaders of Britain, Canada, France, Germany, Italy, Japan and the United States.