Democrat Hillary Clinton and Republican Donald Trump were favored to win their parties’ US presidential nominating contests in New York state on Tuesday, but voting was overshadowed by official confirmation that more than 125,000 people were missing from New York City voter rolls and reports of other irregularities. 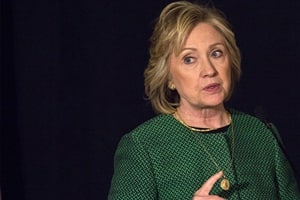 It remains unclear whether Sanders and his backers are ready for a reset. Although the Vermont senator is looking at an insurmountable delegate deficit, he's not said he'll go quietly.

Democrat Hillary Clinton and Republican Donald Trump were favored to win their parties’ US presidential nominating contests in New York state on Tuesday, but voting was overshadowed by official confirmation that more than 125,000 people were missing from New York City voter rolls and reports of other irregularities.

New York City’s comptroller ordered an audit of the city elections board after it confirmed the people’s names had been removed from voter rolls.

Faulty ballot scanners, late-opening polling locations and scant staffing were among the other problems that Stringer cited in a Tuesday letter to the board. He demanded swift attention.

Opinion polls in New York put Clinton, 68, a former U.S. senator from the state, ahead of Brooklyn-born U.S. Senator Bernie Sanders, 74, of Vermont in the Democratic race. The state has been the scene of some of their harshest exchanges during a long campaign.

Clinton hopes to recapture the momentum she lost to Sanders, winner of seven of the last eight state-by-state nominating contests.

“Any double-digit win would really reassure everybody that the (Clinton) campaign is reaching the voters who are going to be the people in November that are going to carry her to victory,” said Dan Fass, a longtime Democratic donor in Rye, New York.

Last week, after the Democratic candidates debated in Brooklyn, Clinton aide Jennifer Palmieri voiced some hesitation about the double-digit margin some opinion polls were predicting.

Clinton has 1,758 of the 2,383 party convention delegates needed to win the Democratic nomination to Sanders’ 1,076 delegates, according to an Associated Press tally. A total of 291 delegates are up for grabs in New York, and a big Clinton win there could make her delegate lead nearly insurmountable.

During the Democrats’ July 25-28 convention, the delegates will select the party’s nominee to the Nov. 8 presidential election.

In Democratic nominating contests, pledged delegates are awarded proportionate to the support a candidate receives in each state, while superdelegates, who make up a smaller proportion, can support any candidate.

Trump, 69, a New York billionaire businessman, already was looking past New York to future contests by sending Paul Manafort, who is charged with chasing the delegates needed to win the Republican nomination, to meet with lawmakers from the U.S. House of Representatives and Senate.

Manafort “feels that there are four or five different pathways to 1,237,” Congressman Scott Desjarlais of Tennessee said, referring to the number of delegates a candidate needs to secure the Republican nomination.

Trump, front-runner for months in the Republican race, has 744 delegates, while U.S. Senator Ted Cruz, 45, of Texas has 559 and Ohio Governor John Kasich, 63, is trailing far behind with 144, according to an Associated Press count. The count includes endorsements from several delegates who are free to support the candidate of their choice.

If Trump does not secure enough delegates needed to win the Republican nomination outright at the party’s July 18-21 convention in Cleveland, delegates would be allowed to switch to other candidates.

Opinion polls show Trump has a double-digit lead in New York, where the “winner takes most” primary carries 95 delegates. But a big win for Trump in the state York would not erase his vulnerabilities.

Cruz’s skillful use of party rules during the primary process has angered Trump, who says the system is rigged against him. Trump remains unpopular with the Republican leaders and activists who select and serve as delegates, whereas Cruz has invested time and money courting them.

Some establishment Republicans have been alienated by Trump’s more incendiary proposals, such as building a wall along the border with Mexico and slapping a temporary ban on Muslims entering the country.

Trump has sought to mend fences with the recent addition of veteran political strategists such as Manafort and Rick Wiley, who will take the lead in upcoming nominating contests, according to a Republican source familiar with the campaign’s operations.

“It is good that they are reaching out to members here, to get policy ideas, and bounce ideas off,” said Barletta, who has endorsed Trump.