February 22, 1992 is a historic date for Kazakhstan and India, as it was on this day that bilateral and diplomatic relations was established between these two countries. Reflecting on this relationship and on his over two year stay in India as Kazakhstan’s envoy. 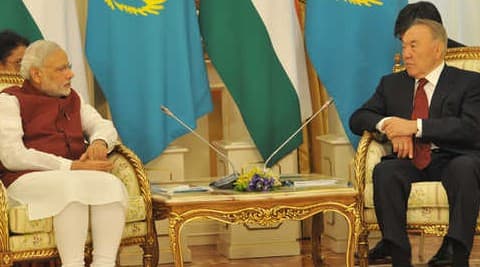 Bilateral and diplomatic relations established between Kazakhstan and India.(ANI)

February 22, 1992 is a historic date for Kazakhstan and India, as it was on this day that bilateral and diplomatic relations was established between these two countries. Reflecting on this relationship and on his over two year stay in India as Kazakhstan’s envoy, Ambassador Bulat Sarsenbayev said Friday that it has so far been a very busy and rewarding diplomatic assignment in more ways than one.

In an interview given to ANI, as both governments near 25 years of their diplomatic relationship, Ambassador Sarsenbayev said, “This diplomatic assignment has been a very busy one. From the beginning, I had the task from my (foreign) ministry, the government and President Nursultan Nazarbayev to do and make everything possible to boost Kazakh-India relations, specifically in the economic area.”

“We in Kazakhstan have an understanding that India is one of those countries that is on the economic growth path. We are almost neighbours. We have used this historic connection to promote our relations in the economic areas, on a permanent basis, we are moving forward. It will take time and I hope next year will be a good one economically, as politically both sides already have an understanding and political will. As ambassador, if these two factors exist, it makes it easier to work and deliver on the objectives,” he added.

During the interview, Ambassador Sarsenbayev was particular about emphasizing the significant progress made between Astana and New Delhi to the point now where both governments are engaging with each other through four special working groups – (1) Economy and Trade (2) Textiles (3) Combating Terrorism (4) Military and Technical Cooperation (5) Information Technologies.

He said that two more special working groups – one on transport, a second on health – will soon be created. He mentioned the substantial progress made since the signing and adoption of the Declaration on Strategic Partnership in 2009 during President Nazarbayev’s state visit to India.

The year 2015, he said, was particularly successful in terms of bilateral relations, as in the month of July, Prime Minister Narendra Modi, accompanied by a group of businessmen and industrialists visited Kazakhstan. He said that during the visit, the Business Forum with the participation of leading businessmen of both countries was held in Astana, and the outcome of the deliberations was the establishment of a Joint Business Council and the signing of a joint “Road Map”.

At present, Ambassador Sarsenbayev said both Kazakhstan and India share common views on global and regional processes and collaborate in important spheres of multilateral diplomacy. Kazakhstan, he said, has consistently supported New Delhi’s aspiration to obtain a permanent seat in UN Security Council, as well as on the issue of obtaining full membership in the Shanghai Cooperation Organization (SCO).

India in turn, has supported the candidacy of Kazakhstan for a non-permanent UN Security Council member for 2017-2018 years and confirmed its participation in EXPO 2017 which is going to be held in Astana from June to September 2017. The Kazakh envoy said that currently there is a steady build-up of trade and economic relations and key areas that have been prioritized include co-operation in energy, agriculture uranium, information technology, transportation, space and military-technical cooperation.

He said that the Inter-Governmental Commission set up between the two countries has so far held 12 meetings, and the six Joint Working Groups are regularly interacting with each other.“Here, in India, I find myself like I am at home. I don’t feel like a stranger, or a visitor. Socially, I have good relations, many friends. Before these friends were only in New Delhi, but now, I have friends from Chennai, Kolkata and Mumbai, and most of them came for the Independence Day reception. I have visited 15 states and I will be going to Gujarat next month for a summit,” he said.

“India is very different from other countries. To be an Ambassador to India is a special position, as I tell my friends and colleagues here and back home that I am an Ambassador in a country that comprises of one-sixth of the world’s population. If I travel, I have a better understanding of India. It is possible to work from New Delhi, but I won’t get a 100 percent picture or idea about the country, its greatness, its culture, its economy and its people, especially the younger generation,” Ambassador Sarsenbayev said.

He said Kazakhstan today is a key partner of India in the Central Asia in terms of volume of trade, adding that the bilateral turnover in 2015 amounted to USD 461.8 million (Exports – USD 220,1 million, Imports – USD 241,7 million). In the period of January-September 2016 the bilateral trade turnover amounted to USD 344,4 million of which exports were USD 199,2 million and imports were USD 145,2 million USD.

Despite some growth in the bilateral trade, both sides, he said, believe that the current trade turnover is below potential, and are working in close cooperation to eliminate structural obstacles, establish more contacts and visits. Today, both nations are carrying out 26 major investment projects in various sectors of the economy.Cultural exchanges between two countries are also progressing in a positive way, with Kazakh artists coming to India to perform regularly.

In concluding, Ambassador Sarsenbayev said, “Twenty-five years of diplomatic relations between Kazakhstan and India shows the direction of development and the confidence with which these ties continue to develop on a mutually beneficial basis.