The traditional areas of Strategic Cooperation have essentially been chemicals, pharmaceuticals, tractors, two-wheelers, other vehicles, textiles, leather and wood. 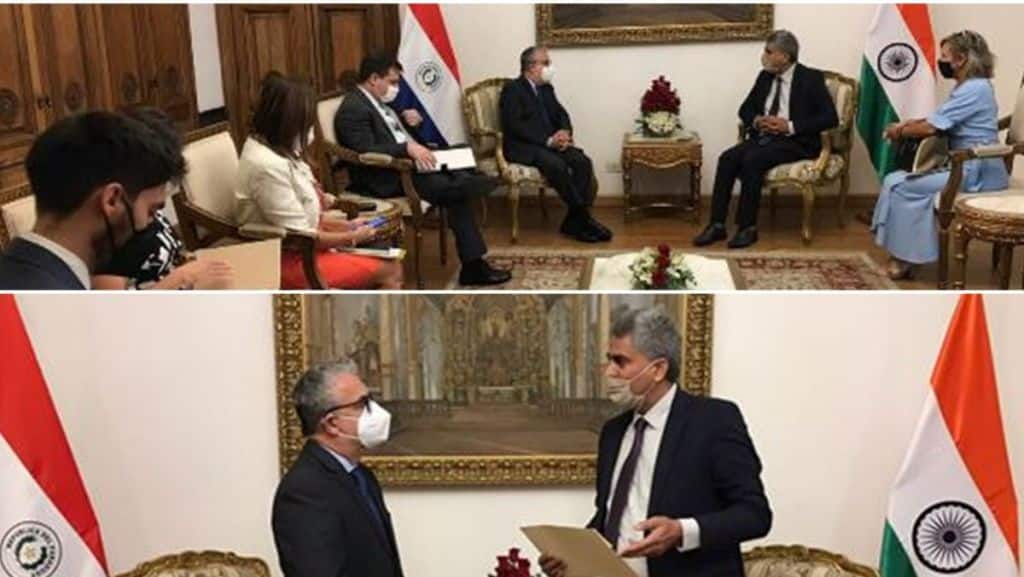 Diplomatic relations between India and Paraguay were established in 1961.

Paraguay a small landlocked economy, has been assuming dynamism for Indian foreign policy over the last two decades.Diplomatic relations between India and Paraguay were established in 1961 but the extent of trade has remained modest despite having risen from $40 million in the first decade of the twenty-first century to $375 million in the decade of the 2010s.India’s exports to Paraguay were valued at USD 161 million, while Paraguay’s exports to India were valued at USD 21 million in the fiscal year 2018-19.

In addition to its macroeconomic stability, Paraguay has a legal framework aimed at attracting foreign investment. For example, Law 60/90 provides incentives towards increasingcapital investments of foreign origin by exempting any investments which fall under this law from custom duties. The Maquila Law (Law Nº 1064 of 1997, further protected by the Decree Nº 9585 of 2000) allows foreign companies to settle in Paraguay as maquila industries, introducing raw materials with a series of fiscal and tax incentives to assemble and manufacture products using national labour in order to finally re-export them. This regime has already allowed Paraguay to attract foreign investment for the establishment of maquiladoras, both in the textile sector and in the development of auto components.

The traditional areas of Strategic Cooperation have essentially been chemicals, pharmaceuticals, tractors, two-wheelers, other vehicles, textiles, leather and wood. As concerns corporate existence, Tata, Mahindra and Hero Motors have had a sizable presence in the automobile sector. Pertaining to technical cooperation, an Indian IT Company, Flatworld Solutions, in collaboration with a local company, runs a call centre employing around 1300 Paraguayans. India’s imports from Paraguay are mainly soya oil (nearly 94 per cent of imports in 2020), and sunflower oil which is expected to increase in the wake of the shortage of edible oil in India. A consortium of Indian edible oil companies is exploring even the possibility of the acquisition of farmland in Paraguay to grow oilseeds and food crops.

Efforts have been made in recent years to diversify and expand the trade basket. New sectors such as renewable energy, health, ICT, space, biotechnology, railways, and tourism-related infrastructure have been identified for collaboration between the two countries.Interestingly, its proximity and low cost of the availability of Brazilian iron ore through the Paraguay-Paraná Waterway, and utilisation of cheap and sustainable electric power generated by the Itaipú and Yacyretá makes the steel sector a prime attraction for collaboration with countries.

India’s preferential trade agreement with the Southern Common Market (MERCOSUR, a regional integration process, initially established by Argentina, Brazil, Paraguay, and Uruguay)concluded in 2004, became operational in 2009. The attractiveness of Paraguay in this grouping for Indian companies could be the fact that they have a simple tax regulation, reduced tax rates, the lowest import tariffs on inputs and capital goods in the trade bloc, and the least bureaucratic business environment among the MERCOSUR countries.Similarly, by India being part of MERCOSUR, itscorporate houses can take advantage of Paraguay as a gateway to connect with Pacific Alliance member countries (Peru, Chile, Colombia, and Mexico). It is pertinent to note that Pacific Alliance members and MERCOSURpartners together account for nearly 80 percent of the market share in the Latin American region.

The Hydrogen Council (a global coalition aiming to accelerate energy transition with 134 companies from across the globe representing the entire hydrogen value chain and working towards the development of hydrogen solutions to foster the decarbonisation of economies)has predicted that the cost of hydrogen solutions come down by 50 per cent by 2030, making hydrogen competitive with other low-carbon alternatives.In the sector of green hydrogen, learning from the ability of the Indian industries would be advantageous for the Paraguayan market. India can dwell upon exporting cost-effective renewable hydrogen along similar lines as natural gas. In subsequent years, this can open up a great opportunity for Latin America to become a significant hydrogen producer with two-pronged benefits- easing the process of energy transition while generating the much-needed foreign exchange through exports. Clearly, the future of this energy partnership would be centred ontechnological advances.

With regards to Indian presence, around 600 Indians, mostly Gujaratis and Sindhis, reside in Paraguay, primarily in the city of Ciudad del Este in south-eastern Paraguay (MEA Bilateral Brief 2020).That implies enormous efforts to build people-to-people connections. To make it plausible, travel has to be made easier between the two countries, the impetus needs to be given to air connectivity to boost tourism which is a flourishing sector in Paraguay and is affordable for Indians given the favourable exchange rate. Besides, a business-friendly visa regime needs to be ushered in for Indian business persons to proliferate commercial relations. Another dimension of importance has been the cultural cooperation manifested through the organisation of the “Festival of India” in Paraguay by the Indian Embassy in Argentina, in two cities: Ciudad del Este and Asuncion. In addition, enabling exchanges between academics and universities and between travel professionals and stakeholders in tourism would portend genuine intent. Paraguayan diplomats have attended the PCFD Course run by the Foreign Service Institute of India from time to time.

Another interesting fact that is crucial in international relations is that Paraguay happens to be one of the fifteen countries with which Taiwan has formal diplomatic relations. By this consideration, it is the one country in the region that has been able to keep China out and for this reason, India can use this as an opportunity to become Paraguay’s strategic partner in the space sector, especially in an effort to boost its space program at a low cost. The proximity can be fathomed by the fact that as part of its vaccine maitri programme, India supplied it with Covaxin, at a time when the country was tempted by Chinese offers of a vaccine.

To augment the cooperation, the supportive aspects have been the similar visions and stands proclaimed on issues like the agreement to cooperate to deal with terrorism, combating the threats of climate change and global warming or concerns with WTO rules. India and Paraguay have resonated in unison on the need for restructuring the United Nations. Paraguay’s decision to sign the International Solar Alliance (ratification is still under process), an initiative by India and France, ushers in a positive step.

(The author is faculty of Latin American studies at CCUS&LAS, School of International Studies, JNU. Email: aprajitakash@gmail.com Views expressed are personal and do not reflect the official position or policy of Financial Express Online. Reproducing this content without permission is prohibited).