Everything you need to know about Russia-Ukraine grain deal

The actual shipments are expected to begin only by mid-August. The onus of implementation of the agreement falls on the UN with Turkey as the co-guarantor. 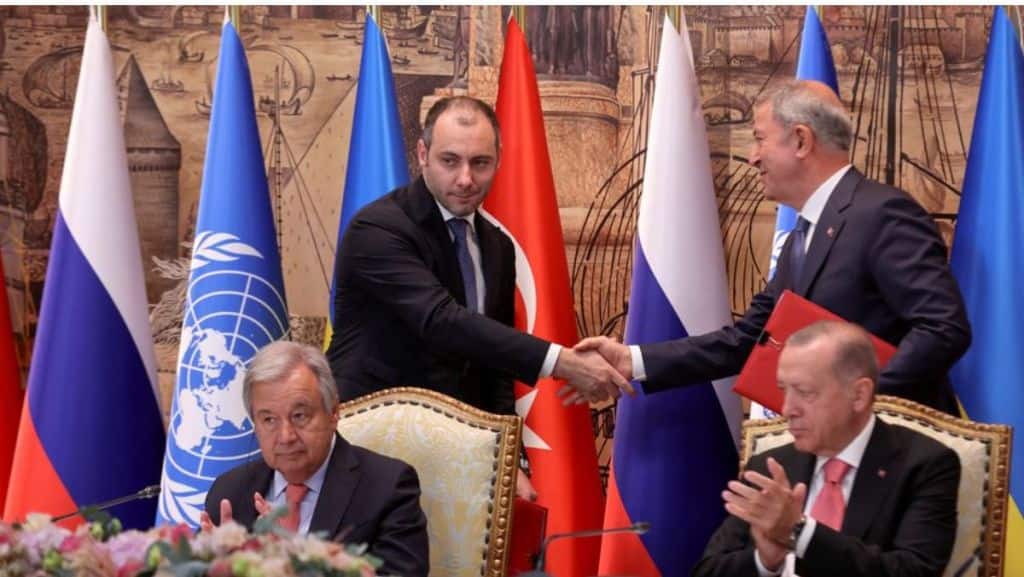 The deal which took two months to reach is set to last for 120 days, with coordination and monitoring Centre to be established in Istanbul, staffed by UN, Turkish, Russian, and Ukrainian officials. (File/Reuters)

In a major diplomatic breakthrough, Russia and Ukraine on 22 July 2022 signed landmark agreements with the United Nations (UN) and Turkey on resuming grain shipments to ease the global food crisis. The mirror agreements will allow both Russia and Ukraine to resume export of grain, oil seeds and fertilizer which were hindered by port disruptions and sanctions due to the Ukraine war.

Both sides attended the signing ceremony in Istanbul but did not sit at the same table. Russia’s Defence Minister Sergei Shoigu signed Moscow’s deal first, followed by Ukrainian Infrastructure Minister Oleksandr Kubrakov signing an identical agreement. Ukrainian officials said they did not want to put their name on the same document as the Russians because of the invasion.

Russia’s invasion of Ukraine on February 24 led to a de facto blockade of the Black Sea resulting in Ukraine’s exports dropping to one-sixth of their pre-war level. Russian exports, in turn, were affected by Western sanctions. Both Russia and Ukraine are among the largest exporters of grain in the world, and the resultant disruption has led to dramatic rise in food prices with wheat-based products like bread and pasta becoming more expensive, and cooking oil and fertilizer also increasing in price. The World Food Programme (WFP) estimates that 47 m people globally have moved into a stage of acute hunger because of the war.

The deal which took two months to reach is set to last for 120 days, with coordination and monitoring Centre to be established in Istanbul, staffed by UN, Turkish, Russian, and Ukrainian officials. The deal can be renewed if both parties agree.

There is no explicit ceasefire in the deal, but Russia’s obligations are clearly spelt out. Equally, to get Russia to release the grain by ending blockades of Ukrainian ports, United Nations Secretary General (UNSG) Antonio Gueterras had to strike a parallel deal on the side with Russia, effectively easing some US and EU sanctions on food and fertilizer. Russia is a major producer of fertilizers, the cost which has spiraled since the war. Clearing those sanctions will bring money into Russian coffers indicating that Russia will make limited compromises for cash. Under the deal:

-Russia will not target the ports of Odessa, Chernomorsk, and Yuzhny. while shipments are in transit.

-Ukrainian pilots will guide cargo ships through a safe corridor in the Black Sea to avoid mines, and then pass through the Bosphorus Strait-an important shipping corridor in northwest Turkey-in order to reach global markets.

-Turkey, supported by the UN will inspect ships before they arrive back in Ukraine, to allay Russian fears of weapons smuggling.

-Russian exports of grain and fertilizer via the Black Sea will be facilitated.

-The ships will be monitored by a Joint Coordination Centre (JCC) which will be established immediately in Istanbul with no further need for demining as it is a lengthy process. The Ukraine pilots will guide the ships along safe channels in its territorial waters, with a minesweeper vessel on hand as needed but no military escorts. Russia has always denied blockading Ukraine ports- it blames Ukraine for laying mines at sea and western sanctions for slowing Russia’s own exports. Ukraine, however, says the Russian navy prevents it from shipping grain and other exports and accuses Russian occupation forces of stealing grain from Ukrainian farms.

Ukraine confirmed it had $10b worth of grain to sell. Russia is a major exporter of fertilizer essential to raise food production. The resultant exports will bring big relief globally, and to the Horn of Africa suffering from drought, exacerbated by the pandemic, a rare locust invasion and Ukraine war. There were also indications of Russia increasing gas supply to Europe which is facing prospects of disunity in its ranks over the energy war.

The actual shipments are expected to begin only by mid-August. The onus of implementation of the agreement falls on the UN with Turkey as the co-guarantor. Stressing the importance of the agreement, UNSG said it was probably the most important thing he had done in his job!

While Turkey expressly hoped this deal would create conditions for ending the war soon, the UNSG was less sanguine and said he presently did not see any conditions for a peace process. The UNSG did admit, though, it was unprecedented to get two parties, locked in a bloody conflict, to agree to a deal of this kind. However, if there is to be a wider peace process following the Istanbul grain deal, it seems only Turkey is talking about it.

The arrival of fresh sophisticated western equipment has given courage to Ukraine, while Russian missiles which destroyed ‘military infrastructure’ in the Black Sea port of Odessa, less than 24 after the signing, has led to uncertainty over the deal. Russia has brushed aside concerns stating the strikeshad hit a Ukrainian warship and a weapons store in Odessa with precision missiles, unrelated to the infrastructure used to store grains, and thus should not affect shipment of grains. Ukraine protested that Russia cannot be trusted. Earlier, responding to similar concerns UNSG had said UN had no means to punish Russia should it breach the deal but added that it would be ‘an absolutely unacceptable scandal and the whole international community would react in a very strong way’.

The prospect of unblocking more than 20m t of Ukrainian grain had immediately led to drop in the wheat prices to levels last seen before the invasion but rose sharply again after the Odessa attack.  This indicates the tenuous nature of the agreement in a highly volatile zone. Global wheat prices rose sharply due to uncertainty over the grain agreement, erasing most of the falls in prices in anticipation of the easing of supply shortages.

(Author is former Indian Ambassador. Views expressed are personal and do not reflect the official position or policy of Financial Express Online. Reproducing this content without permission is prohibited).