United States Ambassador to the United Nations Nikki Haley on Wednesday said that Burmese security forces must respect the human rights and fundamental freedoms of civilians in Rakhine State. 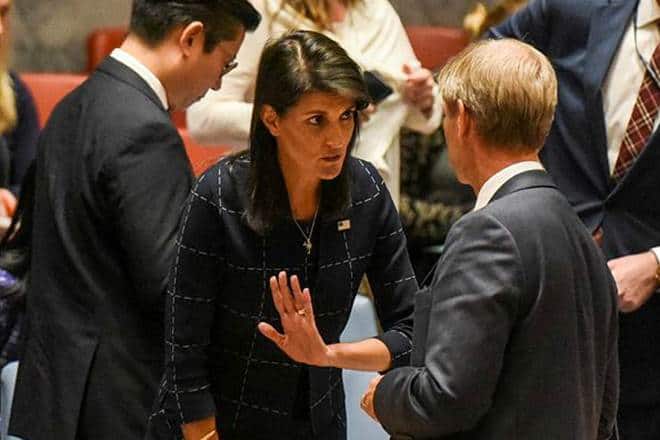 United States Ambassador to the United Nations Nikki Haley on Wednesday said that Burmese security forces must respect the human rights and fundamental freedoms of civilians in Rakhine State. Muslima Rohingyas are a minority ethnic group located in Myanmar’s western Rakhine state and are considered to be a variation of the Sunni religion.

The Muslim Rohingyas have been fleeing from Myanmar (Burma) by the thousands.

Haley expressed her views on Twitter. Since August 25, more than 370,000 of Burma’s Rohingya population has been forced to flee, she tweeted. Haley also demanded that UN Humanitarian Agency should get access in Rakhine state.

We need to see the restoration of @UN humanitarian agency access in Rakhine State, Haley tweeted. She said that “today, the UN Security Council was united in calling for an end to violence against innocent civilians in Rakhine State”. “If the reports of killings, rapes and landmines are true, these are egregious and unacceptable acts,” she tweeted.

United Nations Secretary-General António Guterres on Wednesday also reiterated his call for Muslims from Myanmar’s Rakhine state to be granted nationality or at least a legal status that would allow them to lead a normal life, while also urging the international community to help provide assistance for the nearly 380,000 people who have fled into Bangladesh.

“I call on the Myanmar authorities to suspend military action, end the violence, uphold the rule of law, and recognize the right of return of all those who had to leave the country,” the Secretary-General said in his first press conference since the opening of the 72nd session of the General Assembly.

Guterres repeated his call for “an effective action plan” to address the root causes of the situation, which he said he been left to fester for decades and has now escalated beyond Myanmar’s borders, destabilizing the region.

Since the Rohingya are considered to be illegal Bengali immigrants and were denied recognition as a religion by the government of Myanmar, the dominant group, the Rakhine, rejects the label “Rohingya” and have started to persecute the Rohingya.