Freddy, a towering 7ft 6in Great Dane in the UK has officially been crowned the world’s biggest dog, according to a media report. 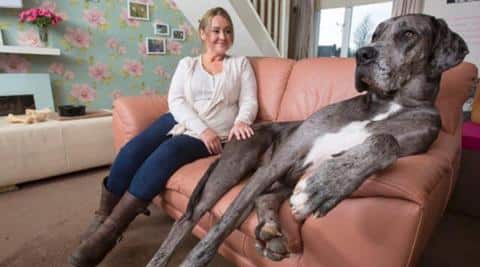 His favourite snack is an entire roast chicken and peanut butter on toast – but also devoured 23 sofas while growing up. (@freddygreatdane/facebook)

Freddy, the Great Dane stands tall at 7ft 6in was declared the biggest dog in the world by the Guiness Book of World Record on Monday, reported the Sun. The dog weighs around 92kg and according to a report, the cost of feeding and maintaining Freddy is nothing less than 12,500 pounds a year. Freddy has a a huge fan following in his neighbourhood but where he really is a hero is on Facebook. The dog has a community page on the social network where a huge number of his adorable pictures and videos are available for viewing. The page is followed by 1,662 of Freddy’s fan. On the cover photo, the dog is shown sitting on the couch with the owner, Claire Stoneman. She told The Star that sitting with Freddy on the couch felt like she was sitting next to a newborn elephant.

In a recent Facebook post she said, “Only 1 week now til Xmas!!! Can’t wait for all my yummy presents – in the meantime I’m going to eat this thing mummy has put round my neck!” Freddy is seen posing with another Great Dane with a peice of decoration around his neck. In his videos, the dog is seen “singing”, “catching birds” and “getting treats”. Here are few of the Freddy’s photographs:

Other animals who have made it to the Guiness book of world records are for having the longest fur on a rabbit, tallest horse living, most balls caught by a dog with paws in one minute, most rings placed on a target by a parrot in one minute, oldest pig – ever, shortest cow and fastest tortoise, but none of the other animals seem to have the presence of Freddy.