What is Public Debt?

Public debt meaning: In the Indian context, public debt includes the total liabilities of the Union government that have to be paid from the Consolidated Fund of India. 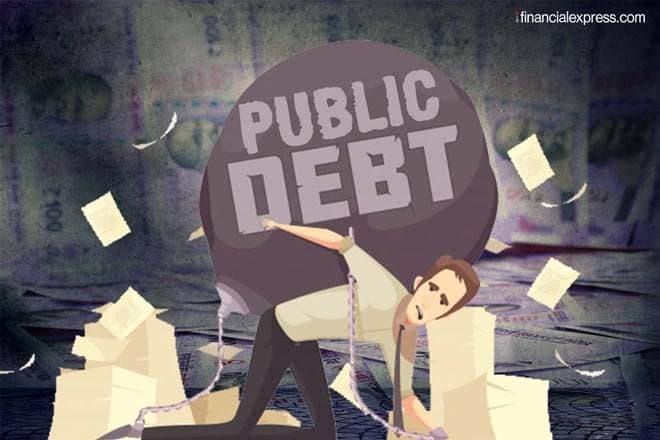 Public Debt meaning, types: The Union government clearly distinguishes its debt liabilities from those of the states.

What do you mean by Public Debt?

What are the types of Public Debt?

The Union government broadly classifies its liabilities into two broad categories. The debt contracted against the Consolidated Fund of India is defined as public debt and includes all other funds received outside Consolidated Fund of India under Article 266 (2) of the Constitution, where the government merely acts as a banker or custodian. The second type of liabilities is called public account.

Also Read
What is Fiscal Policy in India?
What is Primary Deficit?
What is cess?
What is Inflation?

Over the years, the Union government has followed a considered strategy to reduce its dependence on foreign loans in its overall loan mix. Internal debt constitutes more than 93% of the overall public debt. Also, note that external loans are not market loans. They have been raised from institutional creditors at concessional rates. Most of these external loans are fixed-rate loans, free from interest rate or currency volatility.

Internal loans that make up for the bulk of public debt are further divided into two broad categories – marketable and non-marketable debt.

These are listed as follows:

The Union government describes those of its liabilities as public debt, which are contracted against the Consolidated Fund of India. This is as per Article 292 of the Constitution.

As per Reserve Bank of India Act of 1934, the Reserve Bank is both the banker and public debt manager for the Union government. The RBI handles all the money, remittances, foreign exchange and banking transactions on behalf of the Government. The Union government also deposits its cash balance with the RBI. However, of late, there is a demand for creating a specialized agency for managing public debt as exists in some advanced economies. For instance, the Niti Aayog has advocated the creation of a separate public debt management agency (PDMA).

Public Debt is the money owed by the Union government, while private debt comprises of all the loans raised by private companies, corporate sector and individuals such as home loans, auto loans, personal loans.

Public Debt as a percentage of GDP