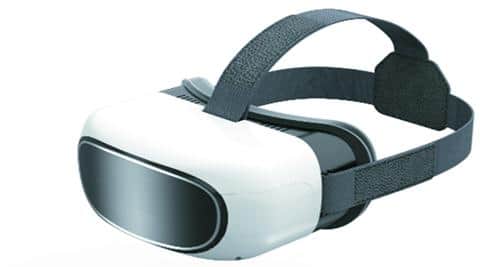 After smartphone-powered VR and ANT-VR headsets, the latest fad seems to be standalone VR glasses or boxes. The first of this new breed in India comes from Bingo Technologies which has launched its VR Glass G-200 with Wi-Fi and 3D support. Here is what we thought about the new device.

Bingo G-200 VR Glass looks like a regular VR headset. However, there is no slot to insert a compatible smartphone. It comes with a power button, a back button, a 3D/2D button as well as four-way arrow and select keys. There is a micro-USB port to charge the headset, a 3.5 mm jack to plug into audio and a TF card slot. The ‘VR Glass’ is as simple as it can get.

Bingo G-200 is very easy to set up and operate. The only pain point is having to enter the Wi-Fi password with the on-screen keyboard using the arrow keys. But the navigation and app flow is easy and intuitive. The video quality is good and offers a cinema experience as if you are sitting far away from the screen. The audio quality can supplement this well.

There is the option of switching from 2D to 3D with some of the content, however, you might want to use this sparingly. The 3D is actually good with depth. You feel this right away as you see the screen in the theatre and the seats leading up to it.

There are two app store options—Google Play as well as the Nibiru Store, with the latter directing you to the former for certain apps. There are some pre-loaded apps such as YouTube and a MediaPlayer. There is also a file manager, which is handy in case you are able to download some VR content from somewhere. There is some pre-loaded content too. However, most of it needs to be streamed in for you to view.

What’s not that good?

Well, the problem starts with the fact that this headset doesn’t really offer 360-degree VR. Like ANT-VR, this is more about the cinema experience and not an immersive experience. So there is a limit to the shock and awe it can offer. It falls short of Gear VR or HTC Vive in that aspect.

The headset is quite heavy, perhaps because of the 5000 mAh battery. So, after a few minutes it gets a bit heavy to handle, and is literally a pain in the neck. However, the apparatus is otherwise designed well and fits easily on most heads.

I still can’t see a use case that would make you buy a VR headset, unless you are into top-end gaming and have the setup that supports it. Bingo G-200 offers great privacy for you to consume content with some good 3D thrown in. That’s about it. It is not a VR headset as some of us would believe. Buy if you like to check out new technology, after all it is only as expensive as a toy.