After a slow start, the World Cup has finally found its place in the life of viewers. 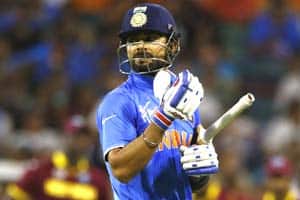 India's batsman Virat Kohli walks off the field after he was caught out by West Indies Marlon Samuels during their Cricket World Cup match in Perth, March 6, 2015.

IN a country where cricket is religion, the devotees weren’t excited enough for the biggest extravaganza—the ICC Cricket World Cup 2015—as the countdown to the tournament started. Unlike the last World Cup in 2011 when it was held in India, and the match timings were tailored for prime time television viewership, early morning matches to be played out in Australia and New Zealand didn’t augur well. And the Men In Blue’s performance in the last few months wasn’t something to brag about. No wonder then that Star India, through Star Sports, which owns the broadcasting rights to the  World Cup and is also a sponsor of the Indian team jersey, had not announced a lead sponsor with ten days to go for the tournament to begin. Given the Indian team’s poor form, lack of star players, the waning appeal of one-day international matches in the wake of the rising popularity of Twenty20 matches as exemplified by the Indian Premier League (IPL), advertisers preferred to wait and watch. Or even better, to bet their money on the IPL in April which had proved itself a sureshot winner with cricket fans in its previous editions.

And then it all changed. India won the opening match against traditional rival Pakistan on February 15 as 288 million viewers (TAM data CS4+ extrapolated to the universe using a standard conversion factor) watched. The game was the most watched television event in India in the last four years, since the finals of the 2011 World Cup, getting a 11.9 TVR (TAM data M15+ ABC) rating on Star network and 2.9 TVR (TAM data M15+ ABC) on Doordarshan (DD). The India-Pakistan game delivered a 17.2 TVR rating across town classes led by the top six metros and 15.5 TVR (TAM data M15+ ABC) across 1million-plus towns.

The fans were back, and the advertisers in their wake. Said Uday Shankar, CEO, Star India, “Nothing is bigger than the ICC Cricket World Cup and the Indian fans have shown their unflinching faith and passionate following for Team India as they began their World Cup campaign with a bang. As the country’s leading broadcaster, our efforts have been to showcase the best of cricket, have wider coverage, offer multiple languages and take the sport deeper by reinventing the viewer experience.”

Brands have certainly taken to the television and digital properties of Star to release an advertising blitzkrieg. Says Gaurav Kackar, marketing head of MTS India which launched its new campaign during the India-Pakistan match, “In India, nothing can be bigger than a India vs Pakistan match. We knew it was a high impact property and to create the right buzz, this was just perfect.”

Star Sports itself has unleashed a host of innovations for the tournament. The first ever broadcast in six languages of the India-Pakistan game received 76% of the viewership from Hindi and regional feeds and the balance 24% from English validating the multilingual strategy pioneered by Star.

Starting with the #WontGiveItBack campaign which highlighted that India were the reigning champion and before each game day asked people to vote on the outcome of the game, it unleashed a disruptive ‘Mauka’ campaign, which went beyond cricket on the field and leveraged fan passion in a unique way. It also roped in the biggest voice in Indian cinema, Amitabh Bachchan, as a commentator with the Star Sports panel of Kapil Dev, Shoaib Akhtar, Rahul Dravid and Sanjay Manjrekar for the India-Pakistan game at the ICC Cricket World Cup 2015.

The network even created tailor-made multiple sponsorship and spot buying options for different feeds allowing advertisers to buy different cuts and air creatives in different languages to target their audiences more sharply. “We wanted to be sure that every kind of advertiser could come on board during the World Cup. So we created several options, right from sale of the highlights separately to India matches being sold as standalone properties, making it easier for advertisers. While some advertisers joined us in the beginning for the entire tourney, some are now coming on board,” said Sanjay Gupta, COO, Star India.

Analysts believe creating several options for advertisers helped Star in reaching out to even local retailers. “Star’s different packages – multiple languages or single regional feeds – have worked in favour of regional brands. Earlier they couldn’t advertise on sporting events without shelling out a lot of moolah because of their pan-India interest. A lot of local brands have shown interest in the regional feeds as they can reach out to their TG through sports now at a significantly lower cost,” says Srinivasan KA, co-founder of Amagi Media Labs which is engaged in geo-targeting of TV ads.

Not to forget, the India team’s back-to-back wins have just improved the scenario. Says Vinit Karnik, national director – entertainment, sports and live events at GroupM, “Brands will now be willing to come on board and Star will increase its ad rates.”

Staying true to everyone’s expectations, the network, which has a upper hand now, has upped its ad rates. If those who bought ad spots for the entire tourney paid R5-5.5 lakh per 10-second spot initially, post the India win over Pakistan, an ad spot on an India match costs R25 lakh for the late entrants in the game. And it will go up further if India goes into the second leg of the game. Media analysts predict a jump of more than 20% in ad rates in the coming days. Last-minute spot buys during the India-Pakistan match, too, had gone for R25 lakh. For Star’s Gupta, it was a combination of the ‘Mauka mauka’ campaign right before the Indo-Pak match, coupled with India’s performance that worked in favour of the broadcaster. “And today advertisers are willing to pay a good amount of money to be part of the tourney,” he added.

As many as 38 brands including Maruti and Airtel as the lead sponsors along with first-timers such as Nestle, Marico, Yepme, Paytm and Raymond are riding on the World Cup. As per industry sources, the lead sponsorship came for R35-40 crore while associate sponsors have coughed up R20-22 crore.

For advertisers such as Maruti and Pidlite Industries who have been part of the tourney since the beginning it was the popularity of the sport that drew them to the game. “We wanted to be associated with the World Cup even before the tournament began because cricket is a popular sport especially amongst our target group,” says Manohar Bhat, vice president – marketing, Maruti Suzuki India.

Agrees, Vivek Sharma, CMO, Pidilite Industries who says the company saw the World Cup as a strategic fit and not as a tactical buy. “We are the associate sponsor and will be present across all the six language feeds. I think this is the key advantage that we will be able to engage with consumers in different geographies,” he added. Its Fevikwik ad released on the day of the India-Pakistan match has got 21.4 lakh YouTube views so far.

Among the brands coming on board now are Nissan and Bajaj Auto. “With the Indian team’s turnaround, we are seeing renewed interest in the World Cup amongst advertisers. While before the tournament started, interest was skewed towards the digital platform, now clients are keen to explore opportunities on the television broadcast as well,” said Anand Chakravarthy, head of media buying agency Maxus West.

Interestingly, Star also got its digital act correct. In addition to the matches being telecast on starsports.com, the broadcaster launched a new on-demand video platform Hotstar in February. According to industry estimates Star Sports’ digital properties got 34 million unique visitors across web and mobile just nine days after the start of the tourney. Of this, starsports.com got 24 million viewers, while 10 million viewers logged on to Hotstar. Moreover, World Cup videos released on both properties together have generated 71 million views. Of this videos released on starsports.com have generated 45 million views, while videos released on Hotstar have generated 26 million views. Star Sports is all set to earn additional revenue of about R20 crore from advertising on these two platforms. For Gupta of Star India, digital is a five-year game plan. “We do not expect to make big money for our digital properties from day one. With the launch of Hotstar and other services online we are preparing for the future,” he added.

Analysts believe that the broadcaster’s idea to launch Hotstar  just before the beginning of the tourney has paid off. “The time difference makes it difficult to watch all the matches live. With a property such as Hotstar which has a variety of content—short videos on important highlights, expert take, etc., Star has been able to reach out to a large number of viewers,” said Preetesh Chouhan, senior vice president (Asia Pacific), Vdopia, an online video advertising firm.

Brands such as Vodafone and Pepsi preferred to go for digital first followed by a campaign on television later. For instance, PepsiCo for its brand Lay’s had last month announced sponsorship rights on starsports.com with presence across screens—PC, mobile and tabs. “It’s going to be a long cricketing season so we want to leverage the season well,” says Ruchira Jaitley marketing category management senior director social beverages at PepsiCo.  Agrees Ronita Mitra, senior vice president, brand communication and insights, Vodafone India, “We had the digital assets campaign planned in March 2015 in line with our marketing strategy. Since, the ICC Cricket World Cup is currently underway, it is the right platform to get desired viewership and eyeballs.”

What has been a cause for heartburn for Star India, however, is the Supreme Court judgement allowing Prasar Bharati to air the matches as per the Sports Broadcasting Signals (Mandatory Sharing with Prasar Bharati) Act 2007. In its affidavit, Star Sports has said it had incurred loss of R290 crore last year for sharing sports signals with Doordarshan and expects to incur a further loss of R120 crore for the World Cup telecasts alone this year. The Star spokesperson refused to comment as the matter is subjudice and will be heard in the court in July 2015.

That Star India has invested heavily in the cricket broadcasting rights is a known fact, however, for Star the bet is beyond the World Cup as it aims to create itself as a leading sporting entity in the country with several sports leagues introduced recently. “We are here to build the sports culture, and it is long time commitment that we have made,” said Gupta.