We have to play our ‘A’ game to beat India: Darren Sammy 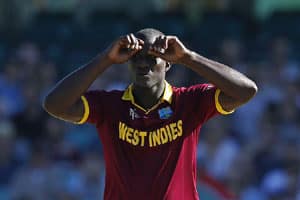 Senior West Indies all-rounder Darren Sammy said his team would really need to perform out of their skins to beat India in the group league encounter of the ICC Cricket World Cup at WACA on Friday.

“It’s another cricket match but India is playing well at the moment. You give each and every opponent the respect that they deserve. We have always had good matches against India and we have to bring out our ‘A’ game to beat India,” Sammy told the media-persons during the West Indies practice session at the Murdoch University Sports Oval, here today.

The West Indies have lost two matches against Ireland and South Africa but Sammy stressed on the need for the seniors in the team to rally around young captain Jason Holder in trying situations.

Asked how it has been like to play under Holder, Sammy replied, “It’s been good. We all must support him (Holder). He didn’t put himself in that situation (being made the captain). I have also been in his situation before. It’s World Cup and we have to support young Jason,” said the ever-smiling former Caribbean captain.

“It’s been tough coming into the World Cup after the South Africa tour. Jason has shown that he is a strong character and strong characters always come back stronger. It’s our duty to support him and help him through the tough time as cricket is a team sport. Every member should come together to perform for the team,” he added.

Sammy admitted that there’s been lack of consistency as far as West Indies’ bowling is concerned.

Asked about the problem areas, he said, “I think it’s about being inconsistent. We haven’t created enough pressure on the opponents when we bowl. In the games when we get it right, we compete with best in the world. We have to maintain proper line and length and bowl the yorkers at the death. We have to come up with a plan to minimize the damage that can be done at the back-end of the innings.”

Sammy was quick to dismiss theories that West Indies’ pull-out from the India series will have an impact on Friday’s match.

“We have to put that thing behind us. I have said many times, what happened in India should not have happened as it robbed an opportunity from two teams which enjoy playing each other. I don’t think that will affect us here as this World Cup match. We will treat it as another WC match and hopefully get points needed to qualify for the knock-out stages,” said the affable all-rounder. WACA strip is one of the bounciest in the world and Sammy expects the bowling unit to make full use of the conditions but also use a bit of brains.

“Any fast bowler would be excited to bowl at the WACA as it is one of the quickest wickets in the world. Having said that, our quick bowlers shouldn’t think that they would just come and blast the batsmen out. They have to put the ball in right areas and hope to get the results. That’s what we are planning to do,” Sammy said.

Sammy said that there will be plans in place for both Virat Kohli and Shikhar Dhawan but the execution part will also be necessary.

“We study all players. We have their footages. Courtesy technology, you can get footage from any position and we will come up with a plan. It’s all good to have plans but main thing is to execute them. That would be our focus.”

A lot of West Indies players feature in the IPL and Sammy said familiarity of playing in IPL can be a double-edged sword.

“Whenever you are going into a battle, it is always good to know the strengths and weaknesses of the opposition. That’s something that the IPL has done. It’s given us a chance to play and familiarize with the Indian players and vice-versa,” said West Indies’ only World T20 winning captain.

“They too are familiar with our players who are there in the IPL. They too will come up with a plan. The most important thing is to have a great game and important fans get entertained and hopefully West Indies will come out victorious.”

For Sammy, important thing is to focus on their strengths rather than being concerned in finding others’ weaknesses.

“Being concerned is probably being negative. I want to be positive. If we can do most things well, we can compete and give ourselves a chance of winning. We need to be consistent for a longer period of time and need to absorb the pressure to win cricket matches.” While West Indies vs Australia rivalry had reached epic proportions during last year’s World T20 in Bangladesh when Sammy and co indulged in wild celebrations after their win over Australia, Sammy insisted they have more friends in Indian team and if they win the celebrations will be muted.

“It’s good to have friends but when we cross the line, it’s business. We enjoy each other’s company off the field but on the cricket field, we compete against each other. Once we play Australia, it’s a pumped up match. If we win, you won’t see the kind of celebrations against India like the one we had had against Australia (Mirpur, 2014),” he said.

Sammy finds useful to “pick Clive Lloyd’s brains” as he has enormous knowledge and oodles of experience to pass on.

“I speak to him for sure. He is a double World Cup winner. He comes in with lot of knowledge about the game. He is a legend. He is also the chairman of selectors and gets to select the team. I hope all guys should be picking his brains as there is a lot of knowledge in there,” he said.

On a lighter note, asked if he would celebrate with colours if West Indies wins as it would be Holi in India, Sammy smiled and said, “India should celebrate Holi but we will like to celebrate victory.”