We don’t have the depth in batting: MS Dhoni 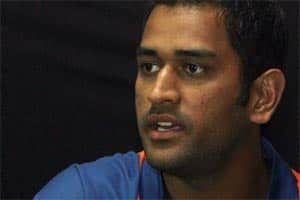 The Indian cricket team has been bogged down by the bowlers’ poor form in recent times but captain Mahendra Singh Dhoni today said that the batting line-up also lacked depth as compared to other sides taking part in the World Cup beginning next week.

Dhoni said that his side will have to preserve wickets to score more runs at the slog overs as the batting line-up was not that deep. He also said that the batting order will not be fixed and will be changed according to the situation.

“We are not that deep when it comes to batting and are different to other teams. Wickets in hands is our strength and once we have wickets in hand we can really exploit the conditions. You have to pick options and learn to score runs freely. Also, we have to alter out batting order according to the conditions,” Dhoni said at an open media session ahead of the World Cup which begins in Melbourne and Christchurch on February 14.

Batting has been India’s strength traditionally, and it may decide the country’s fortunes in their defence of the World Cup as most of the bowlers have been struggling. Dhoni’s comments that the Indian batting has less depth than other teams could mean that it could be a tough job to defend the title they won in 2011.

He said batting and bowling in the middle overs will hold the key to India’s success in the tournament.

“What is important is to adapt to the conditions and the middle overs. Bowling in the middle overs will also be crucial because that will put pressure on the opposition which will put a cap on the scoring from the 35th over onwards and the slog. We have not had much opportunity to bowl in the slog overs which is something that will come into action when the World Cup starts,” said Dhoni.

The build-up to India’s World Cup campaign has not been rosy as they lost the Test series against Australia 0-2 and failed to register a win in the subsequent ODI tri-series. But Dhoni said that was far from worrying the Indian camp as the side can come up trumps during the showpiece event as it did in earlier ICC tournaments.

“Even while playing the ICC Champions trophy, we were going through a rough patch. But, the guys stepped up during that tournament and we played very consistently which counts,” he said.

Asked about the much-anticipated and potentially high-voltage clash against arch-rivals Pakistan in their World Cup campaign opener, Dhoni said that the Adelaide Oval match on February 15 will be just another game of cricket.

“A lot of people have different views about the India-Pakistan matches. How I personally take it is similar to playing Australia, Sri Lanka or any other Test playing nation. The moment you start thinking about a traditional rivalry, you are just going to be adding pressure to yourself,” he said.

The 33-year-old Indian captain said that the two warm-up games — against Australia on February 8 and against Afghanistan on February 10 — will be crucial as the team will decide the playing eleven for the Pakistan match after that.

“We will use the two warm-up games to settle with the playing eleven that will feature in the first game. The warm-ups will be crucial from the perspective of what we want to achieve out of it,” said Dhoni.

Dhoni was also of the view that this time the tournament would be a closely contested one and peaking at the right time would be crucial to win the title.

“This World Cup, most of the teams are quite balanced. It will be a very special World Cup for all the teams. It will be a matter of which team is more consistent and what kind of momentum they take with them into the knockout stages,” he said.

Being defending champions, expectations from the side are high from Indian fans but Dhoni said the team would need to focus on the job at hand instead of being bogged down thinking about external things.

“The expectations of the people are very high which we figured out when we were touring in India and playing at different venues in the 2011 World Cup. The same will apply to the Australian and New Zealand side since they are playing at home. At the same time, their culture is slightly different.

“What is more important is the fifteen member squad and how we as a team do well. We can’t think about the expectation level. We constantly have to deal with the expectation levels of the fans of India and we need to think and concentrate on executing our plans. We know what needs to be done and we will be concentrating on that,” said Dhoni.

Talking about on-field sledging which was at the spotlight during India’s Test series against Australia, Dhoni said, “What we have successfully done in the last three to four years is that we have mellowed down the things that apart from cricket that happens on the field.

“We have stuck to good aggressive cricket on the field but what we have minimised is the verbal things that often happens with the cricketers which is good for the game. You want to play it as a sport and you have to play it hard and you have to maintain the spirit of the game which both the sides have done well,” he said.

Back home, Dhoni and his wife Sakshi Singh Rawat have been blessed with a baby girl but the World Cup topped the Indian skipper’s priority.

“I have been blessed with a daughter. Mom and daughter both are good. As of now I am on national duty and everything else can wait. World Cup is a very important campaign and the rest can wait as of now.”