Manchester United remain 10 points behind leader Chelsea in the Premier League, thanks to their seventh win in eight matches. 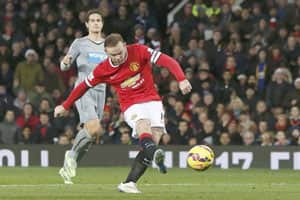 Wayne Rooney scored twice in the first half as resurgent Manchester United easily beat Newcastle 3-1 Friday to strengthen its grip on third place in the Premier League.

Rooney was set up well by his teammates for both goals as Radamel Falcao met a long cross into the area in the 23rd minute, sliding to reach the ball at the far post and square a perfect pass for Rooney to tap into an empty net.

Falcao then helped United win possession just outside the Newcastle area in the 36th, and Juan Mata laid the ball off for a wide-open Rooney to slot a low shot inside the post.

Rooney then helped set up the third by pinging a 35-yard pass to Robin van Persie, who headed past Jak Alnwick, before Papiss Cisse scored a late consolation for the Magpies from the penalty spot.

Louis van Gaal’s decision to cancel Christmas Day training did not backfire. United was the best team for most of the match.

Falcao had one of his best performances in a United shirt up front while Mata was a constant threat, threading dangerous passes through Newcastle’s stretched, unorganized defense.

Rooney again excelled in a midfield role, although Newcastle’s defending for all three goals was sloppy as Alan Pardew’s team fell to its fourth straight loss.

United, on the other hand, remain 10 points behind leader Chelsea thanks to their seventh win in eight matches.

Newcastle created the best chances early on, but United finally sparked into life when Rooney found Van Persie with a pin-point pass, but Alnwick raced off his line and forced the Dutchman wide.

David de Gea then saved United with an acrobatic dive to deny Daryl Janmaat, who had surged forward from the back. Despite the pressure from Newcastle, the hosts took the lead with an impressive team goal.

Rooney started the move, laying the ball off to Mata, who chipped toward the back post after the Newcastle defense backed off. Falcao hooked the ball back across the box and Rooney tapped in from close range.

Mata again played a key role for the second goal, sliding the ball through the away defense to the England captain, who tapped in past Alnwick.

Eight minutes after the break, the game was all but over as Rooney looked up and floated a 35-yard pass over the away defense to find Van Persie, who nodded past Alnwick.

It didn’t matter that Phil Jones tripped Jack Colback as he entered the box and Cisse slotted the penalty perfectly into the top right-hand corner.