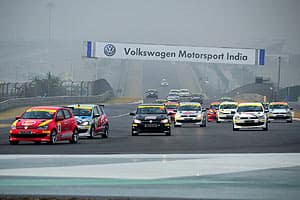 In a closely fought battle for the Polo R Cup 2014 championship, guest driver Ameya Bafna emerged victorious, fraction of a second ahead of Karthik Tharani and registered his second win of the weekend. However, it was Karthik Tharani who gained the maximum points (since guest driver Ameya is not entitled for championship points) in the race to become the Polo R Cup 2014 Champion.

With difficult weather conditions and a damp track, the drivers went out on wet tyres for the final race of Polo R Cup 2014 season. Having set two fastest lap times during Qualifying Practice, Karthik Tharani started Race 3 of the weekend from pole followed by Lee Keshav in second. After losing the lead to Lee for couple of corners, Karthik regained the top spot and held it all the way till the penultimate lap. Ameya Bafna, starting third, came charging in the seventh lap and overtook Karthik and went on to win the second race of the weekend. Coming home in third was Lee Keshav, distantly followed by Anindith Reddy who won the Junior Championship.

Karminder Pal Singh, who had been leading the championship since Round 3, finished 8th and took enough points to maintain his lead by a single point. However, with the rule of best 9 finishes being considered for the final championship standing, Karthik inched past Karminder with 11 points and was crowned the Champion with a total of 358 points. Runner-up Champion Karminder finished off with 347 points. Bonnie Thomas and Anindith Reddy finished off with 296 points each. However, with two victories to Bonnie’s records, he got on to the better side of the battle and clinched the Second Runner-up spot in the championship.

Sirish Vissa, Head of Volkswagen Motorsport India, said “Karthik has shown excellent pace throughout the season and this weekend was just perfect for him. With 180 points scored in the three races of round 4, he has proved to be the best of the lot and rightfully deserves to be the Champion.” He further added, “We have seen an extremely promising drive from Anindith Reddy who has clinched the Polo R Cup 2014 Junior Championship. With our endeavor to support young and budding drivers, I believe we have once again managed to find a talent for tomorrow.”

Polo R Cup 2014 Champion, Karthik Tharani, said “I came to the last round of the season determined to put up the best show and with a win and a second place yesterday, I was even more motivated for today’s race. Ameya and I had a good battle on the last lap but he proved to be the better one. Nonetheless, I was happy to earn the most important points which helped me lift the championship today. I would like to thank Volkswagen Motorsport India for giving us all a truly international racing platform and developing us throughout the season.”

Next Story
Barcelona held to goalless stalemate at rainy Getafe