The class of Kohli was on full display as he smashed 12 fours and one six and held on to one end while wickets fell at regular intervals in the middle overs. 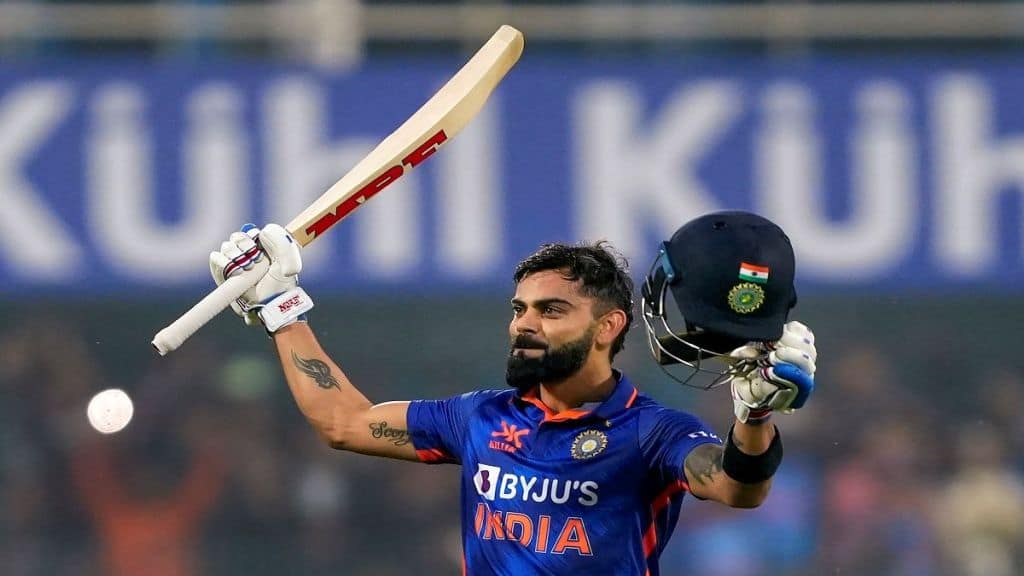 The Sri Lankans were never in the hunt and ended at 306 for eight in 50 overs to hand the hosts a 1-0 lead in the rubber. (Image/PTI)

An authoritative Virat Kohli headlined India’s utterly dominant performance with his 45th ODI hundred as the hosts pummelled Sri Lanka by 67 runs in the first of the three-match series here on Tuesday.

Asked to bat first, India rode former skipper Kohli’s 87-ball 113 and fluent half-centuries from his successor Rohit Sharma (83) and Shubman Gill (70) to rake up an imposing 373 for seven in their allotted quota of overs on a batting-friendly strip.

In reply, the Sri Lankans were never in the hunt and ended at 306 for eight in 50 overs to hand the hosts a 1-0 lead in the rubber.

Also Read
Who is Hasbulla? Age, height and rare genetic condition that connect him and Lionel Messi
IPL 2023: Auction for Indian Premier League to be held on December 23 in Kochi
FIFA bans AIFF for ‘undue influence from third parties’, U-17 Women’s World Cup set to be moved
1500 players to take part in Khelo India Winter Games in Jammu & Kashmir: Sports Minister Anurag Thakur

After opener Pathum Nissanka fell for 72, visiting captain Dasun Shanaka waged a lone battle and produced a counterattacking century, even as the others failed to put up any resistance.

Young speed merchants Umran Malik (3/57) and Mohammed Siraj (2/30) then put the icing on the cake in a lopsided game.

Continuing his blazing form into the New Year, Kohli slammed his 73rd international hundred overall and made the Lankans pay for two dropped catches.

The exuberant Siraj once again bowled splendidly with the new ball and reduced the Islanders to 23/2 inside six overs to set the tone.

He first dismissed Avishka Fernando and then rattled Kusal Mendis’ timber with a scorching delivery to cap a superb opening spell of 5-1-15-2, laced with 25 dot balls.

But Nissanka held on and stood in two crucial partnerships with Dhananjaya de Silva (47) and Charith Asalanka (23) when India operated with spin twins Yuzvendra Chahal (1/58) and Axar Patel (0/32 from five overs) in the middle overs.

Amid heavy dew, Malik came to bowl in the middle overs and struck thrice, dismissing Asalanka, Nissanka and Dunith Wellalage to reduce Lanka to 179/7 in 33.2 overs.

From there though, Sahanka held the fort en route to his second ODI century that came in the penultimate ball of their innings, after Rohit withdrew an appeal for run out at the non-striker’s end after the batter had backed up too far.

Kohli, who scored 113 against Bangladesh in Chattogram in India’s last ODI, continued from where he left.

The class of Kohli was on full display as he smashed 12 fours and one six and held on to one end while wickets fell at regular intervals in the middle overs.

This was Kohli’s third hundred from three ODIs at Guwahati — two here at the Barsapara and one at the Nehru Stadium.

He was dropped twice — on 52 and 81 — on his way to his 45th ODI century, four shy of maestro Sachin Tendulkar’s all-time record of 49 hundreds in the 50-over format.

Rohit responded to the criticism of benching the in-form duo of Ishan Kishan and Suryakumar Yadav by giving India a solid start in the company of Gill.

The Indian skipper had preferred Gill over Ishan who had to sit out despite a record-breaking 210 in the last one-dayer.

Rohit slammed a 67-ball 83 (9×4, 3×6) in a knock of sheer domination. On a flat deck, Rohit was at ease while stepping out to the Lankan pacers, and also pulled them with nonchalance.

Gill was also at his fluent best and complemented his skipper while keeping his flair and elegance intact.

Continuing his dream run in ODIs, Gill brought up his fifth half-century off 51 balls.

It was a one-way traffic for the Indian opening duo before Shanaka dismissed Gill. The youngster was guilty of playing across the line and was trapped in front of the wicket.

Looking to bring an end to his century drought, Rohit too perished in addition of 30 runs to the total. He was cleaned up by debutant Dilshan Madushanka.

The run-rate slowed down and it was a welcome respite for the Sri Lankans who were staring at a 400-plus target.

The home team slowly regained momentum with Kohli and Shreyas Iyer (28) taking charge of the middle-overs.

Having got the nod ahead of Suryakumar, Iyer looked fluent and hit Wanindu Hasaranga for a six. But he failed to convert his start.

The underfire KL Rahul (39) also could not make it big and was bowled around the legs after being deceived by a slower one from Kasun Rajitha.