The final bow! Roger Federer bids adieu to tennis in tears – Watch some of his legendary moments here

A crowd of over 17,000 gathered at London’s O2 Arena to see the 20-time Grand Slam champion on the court one final time. 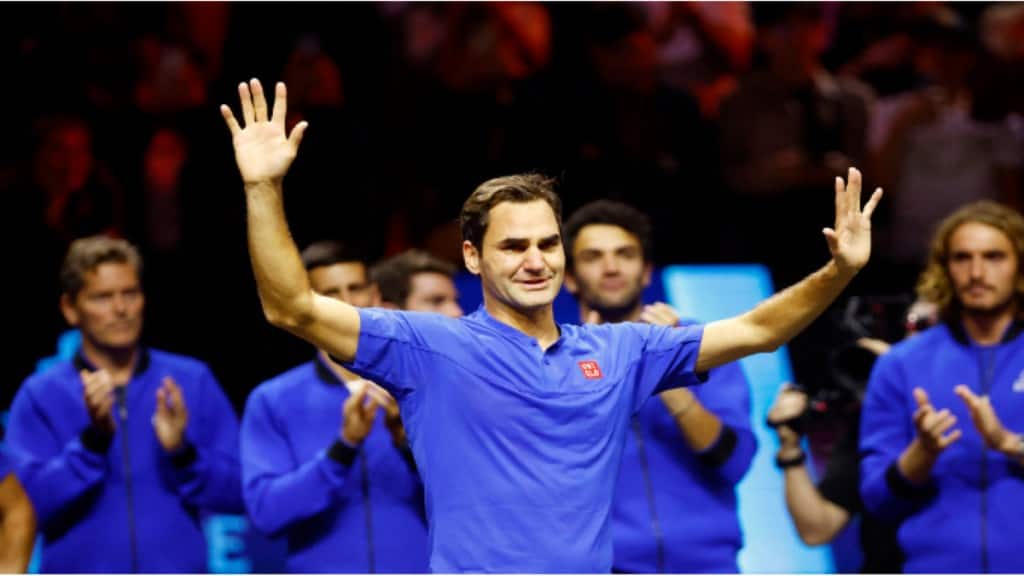 Federer produced moments of his trademark magic during a fiercely contested duel and kept his emotions in check. (Image: Reuters)

Some farewells are difficult. The one of Roger Federer last night was among such farewells. The Swiss great played his last game on Friday before bidding adieu to the sport he so graciously played over the last two decades. Federer’s last match ended with defeat, but this once the result hardly mattered as Federer headed into retirement with tears in his eyes and cheers ringing in his ears.

A crowd of over 17,000 gathered at London’s O2 Arena to see the 20-time Grand Slam champion on the court one final time. Federer returned for a match after more than a year and to make the final act even more memorable, he teamed up with Rafael Nadal — the Spaniard with whom he shared one of tennis’s most captivating rivalries.

Rafa and Federer (Team Europe) were playing doubles against the Team World duo Jack Sock and Frances Tiafoe. Sock thumped a forehand winner and sealed a 4-6, 7-6, 11-9 win for Team World. After a brief moment of stunned silence around the packed arena, the crowd rose to salute the 41-year-old Federer, whose elegance, charisma and sportsmanship has graced tennis and transcended sport during a 24-year career.

“I enjoyed tying my shoelaces one more time, everything was the last time,” he said, adding, “Playing with Rafa and having all the greats here, all the legends.”

Federer produced moments of his trademark magic during a fiercely contested duel and kept his emotions in check. But he couldn’t stop himself from what must have been an overwhelming experience as Ellie Goulding sang while a montage of his feats played on the black court. The entire court got emotional when Federer was hugged by wife, Mirka, children Leo, Lenny, Myla and Charlene, and his parents Lynette and Robert.

Federer broke down as he thanked his wife. “She could have stopped me a long, long time ago but she didn’t. She kept me going and allowed me to play, so it’s amazing – thank you,” he said.

One of the finest sportsperson, Federer has given sports lovers across the world spectacular tennis moments throughout his illustrious career that will be cherished forever. Let’s take a look at some of the best matches of the Swiss legend of tennis:

This one was special as it marked the 15th Grand Slam title for Federer.

According to ATP, at four hours and 26 minutes, this was the longest three-set men’s match of the Open era.

Some call this clash very dramatic!

“Against Rafa it’s always epic,” Federer had said. “This one means a lot to me because he’s caused me problems over the years.”

What makes this one special is that Federer was on crutches just three weeks prior to the event due to an ankle injury. However, he showed one of the best displays of his skills on the court making this a memorable title match.