Marcus Rashford signed a new contract with Manchester United through June 2020, a reward for the teenage striker’s breakthrough this season that could earn him a place in England’s European Championship squad. 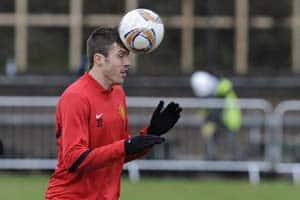 Marcus Rashford signed a new contract with Manchester United through June 2020, a reward for the teenage striker’s breakthrough this season that could earn him a place in England’s European Championship squad.

United announced the deal on Monday, saying Rashford has an option to extend the contract by a further year.

The 18-year-old Rashford was plucked from the youth teams and given his senior debut in February because of an injury crisis at United. He scored two goals in his debut – a Europa League game against FC Midtjylland – and two more against Arsenal three days later in his first Premier League start.

He scored the winner in his first Manchester derby and netted within three minutes of his England debut on Friday. England’s Euro 2016 squad will be announced Tuesday, and Rashford looks to have done enough to have persuaded coach Roy Hodgson to select him as one of his forwards for the tournament.

”I have always been a Manchester United fan, so to be playing in the first team really is a dream come true,” Rashford said in a United statement. ”I am grateful for having the chance to prove myself. To be able to play football at the biggest club in the world means everything to me and my family.”

Rashford was United’s first-choice striker in the final three months of the season under coach Louis van Gaal, who was fired last week. Jose Mourinho was hired Friday as Van Gaal’s replacement and must decide whether to retain Rashford as the No. 1 striker, with United linked with a move for Sweden international Zlatan Ibrahimovic.

Rashford has scored eight goals in 17 appearances for United.

”Marcus is a naturally talented footballer with great potential,” United executive vice chairman Ed Woodward said. ”He has taken his chances well and has integrated into the first team very quickly.

”I am delighted that Marcus has signed a new contract, he is at the right club to continue his development. He is still very young and we need to be patient but he is developing in the right way and we believe he has a great future ahead of him.”