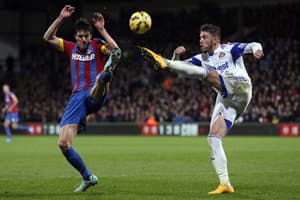 Sunderland striker Steven Fletcher scored in each half to help his beleaguered side earn a much-needed 3-1 win at Crystal Palace in their Premier League match at Selhurst Park on Monday.

Sunderland’s second league win of the season, after conceding 10 goals with no reply in their previous two matches, lifted them out of the relegation zone to 15th place with 11 points from 10 matches and left Palace 17th with nine.

The visitors went ahead after half an hour when Fletcher rose to direct a header into Julian Speroni’s bottom right hand corner from Patrick van Aanholt’s cross after the left back was fed out wide by midfielder Jordi Gomez.

Palace equalised thanks to an own goal by substitute Wes Brown in the 55th but Gomez put Sunderland back in front against the run of play by rifling a low shot from the left into the bottom far corner in the 78th minute as Palace chased victory.

Fletcher scored the third on a breakaway in added time to wrap up the points and ease the pressure on manager Gus Poyet.