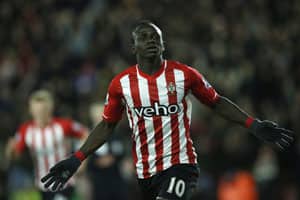 Southampton and Aston Villa scored late winners in matches affecting opposite ends of the Premier League on Tuesday, while a touchline spat between the managers marred Sunderland’s 1-1 draw at Hull.

Southampton revived its unlikely tilt at Champions League qualification thanks to Sadio Mane’s 83rd-minute goal in a 1-0 home victory over Crystal Palace. The south-coast club, which has been the surprise team of the season in England, ended a three-match winless run to jump provisionally to fifth – a point behind Manchester United.

”I hope (the players) will get total confidence back and play like we did before,” said Southampton manager Ronald Koeman, whose team was in third place six weeks ago.

Villa climbed out of the relegation zone – at least until the midweek round of fixtures is completed on Wednesday – thanks to a 2-1 win over West Bromwich Albion that was secured by a penalty converted by Christian Benteke in the fourth minute of injury time.

It was Villa’s first win since Dec. 7 and ended a seven-match losing streak that has jeopardized the club’s unbroken stay in the Premier League.

”We are still alive and kicking,” said Villa manager Tim Sherwood, who was hired last month after the team dropped into the bottom three.

”When I left home, my missus said to me she had done the Euro lottery – a 54-million jackpot – but I said I’d take three points all day.”

Sunderland manager Gus Poyet and Hull counterpart Steve Bruce squared up to each other in the technical area in a first-half incident that was provoked by visiting midfielder Jack Rodwell’s yellow card for diving.

Poyet reacted to the booking by kicking over a bucket containing bottles of drink and was sent to the stands by the referee. As Poyet left the technical area, he confronted Bruce and the pair had to be separated by the fourth official.

”These things happen in the heat of the moment – grown men acting like a couple of children,” Bruce said.

Rodwell ended up scoring Sunderland’s equalizer in the 77th minute, canceling out a third goal in four games by Dame N’Doye – a deadline-day signing in the winter transfer window.

The point pushed the two teams further clear of relegation trouble, which Villa has also escaped thanks to Benteke’s coolly-taken penalty.

In what could prove to be a turning point in Villa’s season, West Brom goalkeeper Ben Foster rashly brought down Matthew Lowton in the area and was sent the wrong way by Benteke from the spot.

Sherwood sprinted along the touchline in joy after the goal that secured his first league win since taking over from the fired Paul Lambert.

”We kept at it,” Sherwood said, ”and someone was looking down on us today.”

Benteke had provided the flick-on that Gabriel Agbonlahor ran onto before shooting through the legs of Foster to put Villa ahead in the 22nd. Saido Berahino equalized in the 66th minute from West Brom’s first shot on target.

Southampton’s form has dipped since back-to-back wins in mid-January – at Man United and Newcastle – pushed the team into third place. Koeman’s men had only won once in five matches, and were without a goal in more than six hours, before Mane pounced from close range to chip the goalkeeper.

Southampton leapfrogged Liverpool and is only two points behind third-place Arsenal, which plays Wednesday along with Liverpool and United.