In an exclusive conversation with Financial Express Online, Sandeep, one of the best right corners in the world now, recalls his early days, reveals the tip he got from his mentor and opens up about his love for volleyball. 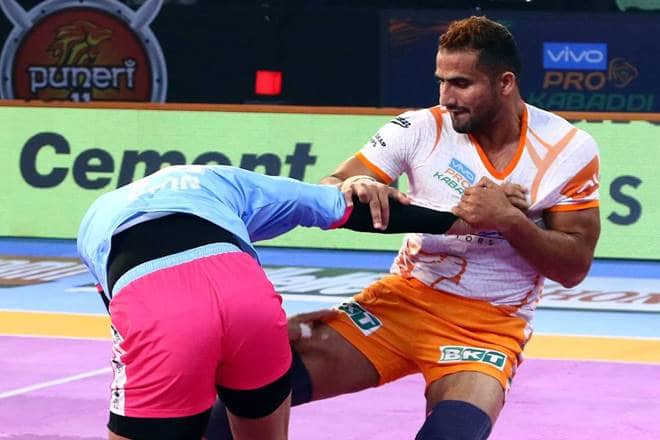 When Sandeep Narwal parted ways with his family in 2009 and moved to Gandhinagar in Gujarat for Kabaddi, the all-rounder had no idea that his life was about to change. Five years later, he became the then second-most expensive player in Pro Kabaddi League when Telugu Titans spent Rs 45.5 lakhs for the beast and in 2016, won the Kabaddi World Cup with India. In an exclusive conversation with Financial Express Online, Sandeep, one of the best right corners in the world now, recalls his early days, reveals the tip he got from his mentor and opens up about his love for volleyball.

The 25-year-old Puneri Paltan star said that there was not much craze for the sport when he was young and that made things tough for the players. Like most of the other Kabaddi stars, Sandeep started playing Kabaddi because he loved the sport and representing the nation was his only goal.

“Most of the Kabaddi players come from very humble backgrounds. When we were young, there was not much craze for the sport. We never thought that our lives would change so fast and a competition like Pro Kabaddi League would come up. The only thing we had in mind was to work hard and represent the nation in Asian Games,” he said.

“Also, people believed that if they would play well, they will end up getting a government job in Railways, ONGC or maybe, in Air Force. The thinking was that it would help us support our families,” Sandeep added.

Sandeep Narwal was born on April 5, 1993 in Kathura village of Sonepat – the town which is famous for its ‘Narwals’. He started playing Kabaddi at a very young age. But, things changed after former India player Jagdish Narwal identified the potential in Sandeep.

“Jagdish Narwal was a big player. He had represented India in the Asian Games and as kids, we used to look up to him. In our village, most of the kids started playing Kabaddi after watching him. He thought that I have potential and started paying attention towards me,” Sandeep said.

Jagdish, a member of India’s 2002 Asian Games team and father of Patna Pirates’ all-rounder Deepak Narwal, knew that there was not enough infrastructure in the village for Kabaddi. So, he decided to send Sandeep to Gandhinagar in Gujarat.

“My career actually began after I moved to Gandhinagar in 2009. It was then that I got selected in the Indian team for the Asian Games and later, Pro Kabaddi League happened,” recalled Sandeep, who stayed away from his family and prepared.

Sandeep is among the most fearless players on the court and has pulled off some stunning tackles over the years. All this time, he has only acted upon the teachings of his mentor – Jagdish Narwal.

“Doesn’t matter how good a raider is…dekho, kaam se darna hai, naam se nahi. It should not matter if Ajay Thakur or Pardeep Narwal are against you. It is their performance on the court that matters,” Sandeep said.

In 2014, Sandeep Narwal was picked by the Patna Pirates for the inaugural season of the tournament – a team he stayed with for three years, captained for a while and won the title with before moving to Telugu Titans for the fourth season.

Last year, he was purchased by the Puneri Paltan and formed a formidable defence with the veteran Dharmaraj Cheralathan. This year, the franchise decided to retain Sandeep along with skipper Girish Ernak, experienced Rajesh Mondal and Gurunath More.

The all-rounder was full of praise for the franchise and said that it is the best among the 12 teams that are part of the league right now. “I am blessed to be a part of a team that treats every player equally. They provide us with all the necessary things. Jitni maango usse zyada hi kit de dete hain,” he said.

Asked about his partnership with Girish Ernak, Sandeep said, “Combination is very important in Kabaddi – may it be from corner to corner or cover to cover. But, if both the corners are good, the team is not too dependent on covers.”

However, Sandeep believes that it would have been better if the league had come earlier as it would have benefitted many players. “I wish this league would have come earlier. There were so many great players before us who worked so hard. They had such a fantastic technique that is tough to learn.”

Sandeep Narwal had started his career as an attacking player. Out of the 119 points he had earned in the first season of Pro Kabaddi League, 92 came from raids while just 27 had come from tackles. This included eight super raids and one Super 10.

But, by the third season of the league, Sandeep had transformed into one of the best defenders. He finished the season as the second-best defender with 55 tackle points, only behind Manjeet Chillar who scored 61 tackle points. That season, he managed only nine raid points with no super raids or super 10s.

Even though Sandeep managed 33 raid points in 2017, his raids were few and far between.

Remember this #Bhaari Dhobi Pachad by Sandeep Narwal?
A single-handed tackle so powerful, the raider simply could not get back to his feet! This #Bhaari move surely is our moment of the match. – presented by our co-partner, @XiaomiIndia#PadengeBhaari#VivoProKabaddi #Kabaddi pic.twitter.com/7zn67Lx8jj

The 25-year-old said that he stopped raiding that frequently due to a knee injury but, hopes to be back at his best soon.

“I had a knee injury last year after which I decided not to raid that frequently. Also, we have four or five good raiders in the team this season. But, I am fully fit and have started raiding again. In the coming matches, you might see me raid more often,” he said.

Sandeep’s team India captain, Ajay Thakur owns a gas agency and believes it is important for Kabaddi players to own businesses but the Puneri Paltan star is of a different opinion. “As of now I have no plans to start a business,” he said.

“I am a farmer. I own land and might expand that in the coming years. Because, that is something which will only grow in terms of value,” he added.

Currently working as an Income Tax inspector in Delhi, Sandeep plans to keep himself busy continuing in the service once he is done bringing raiders to the mat.