He was also known as ‘Bhombal da’, and ruled the Maidan for more than a decade after making his debut at the tender age of 19 years from the Rajasthan Club. He hailed from the North Bengal town of Malda. 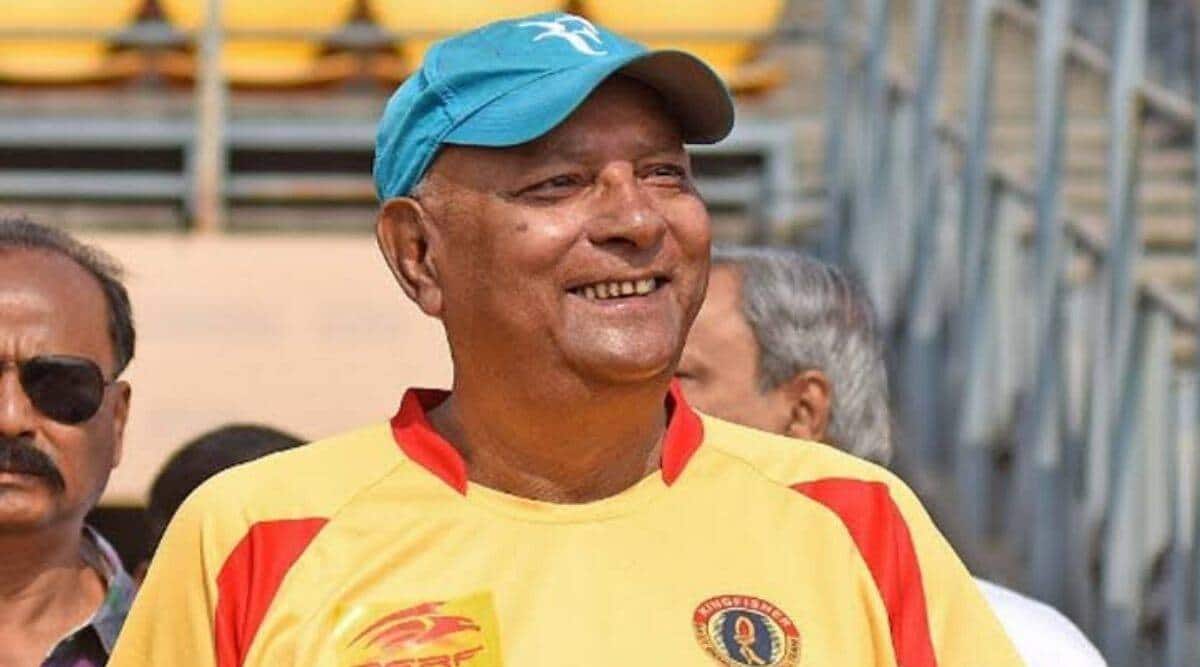 He became the coach of Mohun Bagan in 2010-11 and the last time he was seen in coaching role in East Bengal in 2018. (File image: Twitter via IE)

A fearless competitor who used brain and brawn in equal measure, Subhas Bhowmick was one of the most fascinating characters in Indian football through the 1970s with his muscular built and equally expressive carefree opinions.

On Saturday morning, Bhowmick, who was undergoing dialysis for a long time breathed his last at the age of 72, survived by his wife, son and daughter and the legions of fans, who loved and lived the moments left by him both on and off the field.

“He had to undergo dialysis regularly for about three and half months. He also underwent bypass surgery about 23 years ago. Recently, he was admitted to a private hospital in Ekbalpur with a chest infection,” a family member said.

While India had some of the finest international footballers in 1960s which include Pradeep Banerjee, Chuni Goswami, Tulsidas Balaram, Jarnail Singh, Arun Ghosh, Peter Thangaraj to name a few, the numbers quote dwindled in the 70s save two Bengalis, who were thought of international standard.

They were pint-sized right back Sudhir Karmakar and ‘bulldozer’ winger Bhowmick, who were both part of the 1970 Asian Games bronze winning Indian football team.

Bhowmick, in fact, scored in the tournament and in his 24 games for India had nine goals including a hattrick in the Merdeka Cup (Indian teams were regular feature in 60s and 70s) along with goals in the Asian Games in Bangkok.

However what made Bhowmick famous was his exploits at the club level for East Bengal primarily and also for Mohun Bagan.

He had scored 83 goals for the red and golds and 82 for the green and maroon between 1969 to 1977 as Kolkata football’s popularity was at its peak during that era.

He wasn’t a conventional striker but with his brute force would take down the biggest of defenders in his stride sprinting through the right flank and then cutting inside to either take a crack at goal or set up the likes of Mohammed Akbar for the final strike.

For East Bengal, it was diminutive Gautam sarkar, who would do the spadework in the midfield and the leave it for Bhowmick and Shyam Thapa to seal the deal.

His finest hour came in the IFA Shield final in 1975 when East Bengal walloped Mohun Bagan 5-0.

The legend has it that Bhowmick would race past the Bagan defence and then call his colleagues “aay, aay, goal kore jaa” (come, come, score the goals).

Although he never admitted but Mohun Bagan releasing him for its services a few years before had left him sour and he wanted to teach the green and maroon a lesson in red and gold colours.

He also had some great games for Mohun Bagan including one against Pele’s New York Vosmos in 1977 and also in 1977, he singlehandedly won the Durand Cup for Mohun Bagan after a massive fall-out with coach PK Banerjee, whom he considered as his ‘Guru’.

“You don’t know how much me and Pradeep da (PK) had abused each other after he decided to bench me during the first final. When I was introduced in the replay, I played a part in the winning goal and let it rip in-front of him. But it was Pradeep da’s style of inciting me and motivating me by putting me on reserves list by stroking my ego,” he had once recollected.

Known for his aggressive demeanour, Subhas once during the Santosh Trophy locked the then Bengal coach in the hotel room.

The coach would become nervous before a big match and “would say negative stuff” so a livid Bhowmick locked him in his hotel room so that “there’s no negativity during the match.”

After hanging up his boots in 1979 hen he was only 29, Bhowmick switched to coaching making his debut on the field as the coach of George Telegraph in 1986.

But his actual coaching career kicked off from Mohun Bagan in 1991 and played a role in getting Subrata Bhattacharya, already into his 17th season as a professional player, retire.

Before that in 1990, he coached Indian team in a Presidents Gold Cup tournament in Dhaka, which was also a disaster.

He coached red-and-gold to the historic ASEAN Cup triumph in 2003.

Bhowmick also coached East Bengal to successive National league titles (2003-04) and replicated the success with Churchill Brothers (I-League win in 2012-13) as its technical director as he was known as the ‘Jose Mourinho’ of Kolkata Maidan.

He was also the coach of Mohammedan Sporting in 2006, Salgaocar in 2007-08 before joining Churchill Brothers where he made them I-League champions for a second time.

He was also known as ‘Bhombal da’, and ruled the Maidan for more than a decade after making his debut at the tender age of 19 years from the Rajasthan Club. He hailed from the North Bengal town of Malda.