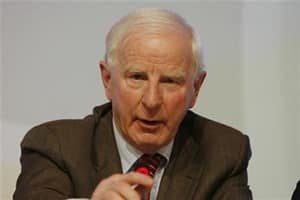 Police said in a statement that Hickey, the 71-year-old head of the European Olympic Committees as well as the Irish national committee, was detained at a luxury Rio hotel. (Source: Reuters)

Police said in a statement that Hickey, the 71-year-old head of the European Olympic Committees as well as the Irish national committee, was detained at a luxury Rio hotel.

Police said in a statement that Hickey, the 71-year-old head of the European Olympic Committees as well as the Irish national committee, was detained at a luxury Rio hotel.
According to Brazilian media, Hickey tried to escape during the operation. The reports said he fell ill during his arrest and was taken to hospital.

City police acted to “carry out an arrest warrant and search warrant against Patrick Joseph Hickey, from Ireland, a member of the International Olympic Committee,” police said in a statement.

“He was arrested,” a spokesman confirmed.

Hickey has been a member of the IOC executive board since 2012. As head of the European body he has been instrumental in setting up the European Games which was first held in Baku, Azerbaijan, last year.

The arrest — with echoes of a police raid on a FIFA hotel in Zurich last year in which seven officials were held on corruption charges — will come as a blow to the IOC which has made anti-corruption efforts a priority since a bribery scandal around the 2002 Salt Lake City Winter Olympics. Six IOC members were expelled after the scandal.

An IOC spokeswoman said: “We are still in the process of establishing the facts” and made no further comment.

The Olympic Committee of Ireland would only say that it was “seeking total clarity on the situation before we comment further.”
Hickey’s arrest follows earlier operations by police against what they say is an international ticket scalping ring.

The head of the sports hospitality company THG Sports — which was licensed to resell London 2012 and Sochi 2014 Olympic tickets — was arrested on charges of illegal sales. Hickey’s son Stephen used to work at THG.

Hickey senior denied any connection to THG in an interview last week with Irish broadcaster RTE.

Kevin James Mallon, a director of THG Sports, was arrested in Rio on August 5 in possession of almost 1,000 premier tickets for Games events.

Rio police said they had confiscated about 1,000 tickets that were being sold far above face value, mostly for popular events like the opening ceremony. Some appeared to be marked with the name of the Olympic Committee of Ireland.

Another company involved in the affair is Pro 10 Sports Management, an Irish company based in Lucan which was appointed by the OCI as its authorised ticket re-seller in Ireland.

Pro 10 said the tickets Mallon had in his possession were held on their behalf for collection by Irish and other European customers who had purchased them at face value, plus a commission.

In a statement on their website Pro 10 complained that they had suffered “significant commercial loss” as a result of the seizure of the tickets.