P V Sindhu sent Indian fans into a frenzy by blasting through Japan’s Nozomi Okuhara to reach the gold medal decider for the women’s singles at the Olympic badminton on Thursday. 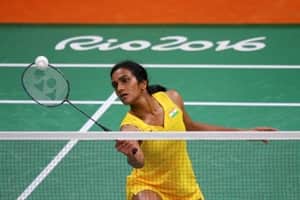 The two female athletes, who made the nation proud, are one of the few female faces to reach such a milestone. While Sakshi became fourth, Sindhu became fifth female athlete ever to clinch a medal at Olympic games. (Reuters)

P V Sindhu sent Indian fans into a frenzy by blasting through Japan’s Nozomi Okuhara to reach the gold medal decider for the women’s singles at the Olympic badminton on Thursday.

With a huge contingent of home fans roaring “Go India, go!”, the 21-year-old Hyderabadi gradually wore down sixth-ranked Okuhara before charging to an emphatic 21-19 21-10 victory at the Riocentro.

A nation that has never punched its weight at the Olympics, India has had a paltry return at Rio, with only a solitary bronze won by freestyle wrestler Sakshi Malik on Wednesday.

Sindhu must deal with the expectations of a billion people when she heads into a tough decider against the twice world champion Marin.

“It’s not like pressure but it is a big moment for me playing in the final, so it’s just I have to do my best and play my 100 percent game and that’s all I feel,” she told reporters, having secured the country’s second badminton medal following Saina Nehwal’s bronze in the same event in London.

“Of course, (Marin) is a very tough opponent.

“It’s not going to be easy tomorrow because it’s another big final. And she’s really playing well.

“She played brilliantly against Li Xuerui today. So I suggest that tomorrow, who plays well and gives their best is the winner.”

Marin will also have been impressed by the ninth-ranked Indian, who has carried Team India’s hopes since their top singles player Nehwal bowed out of Rio with an injury-hampered loss.

Growing in confidence as the match wore on, Sindhu won 10 consecutive points to close out the match with a barrage of overhead smashes.
She will meet another player with impressive firepower in Marin, who never allowed Li to settle into a rhythm.

“I don’t know what will happen tomorrow. I will give everything I have on the court to get the gold medal that I want so badly,” said the 23-year-old Andalucian.

“I am excited because I have trained so hard, but it was worth it.”

Marin’s win tipped the last Chinese woman out of the tournament, a humbling moment for the badminton superpower that won all five titles at London.

China surrendered its titles in mixed doubles and women’s doubles earlier in the week but still has chances in the men’s events.

“We have tried our best,” said Li.

“These days, the challenge is much more competitive worldwide. Every team is showing they are strong and powerful.”