Pullela Gopichand: One ‘Dronacharya’ for many ‘Arjunas’

As and when PV Sindhu was losing points to Okuhara, it was Pullela Gopichand who screamed at her to keep her spirit up. 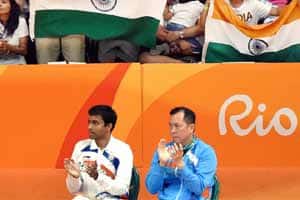 When PV Sindhu defeated Japan’s Nozomi Okuhara in two straight sets, people started praising the shuttler for her impressive performance, but if you have watched the whole 49-minute long match, you will figure it out that as and when Sindhu was losing points to Okuhara, it was Gopichand who screamed at her to keep her spirit up. An All England Open Badminton Championships winner, Gopichand is known for his gentle behaviour but he is a man of steel from his thoughts. Gopichand owns and runs Gopichand Badminton Academy and is a recipient of Arjuna Award (1999), Dronacharya Award (2009) and India’s third highest civilian award Padma Bhushan (2014).

As soon as Sindhu entered Badminton final, celebrations broke out at Pullela Gopichand Badminton Academy. Even PV Sindhu’s father P V Ramana credited her victory to coach Pullela Gopichand. “Very, very happy no words to describe. From the age of 10 Gopi has taken care of her. We are very grateful to him and Sindhu has also struggled to win an Olympic medal,” said Ramana. Ramana was aware that how Gopichand has carved out sturdy Sindhu out of soft Sindhu. PV Sindhu is very shy in nature and once Gopichand had asked her to scream midst of the many people when she was standing inside the court of Gopichand Academy. This was just to bring her resistance of self expression out.  Sindhu’s mother P Vijaya also dedicated her victory to Gopichand. “We know how Gopichand worked hard and always encouraged her. His only ambition was that we have to win a medal better than what others have won so far,” said Ramna.

Gopichand has an unique ability to identify talents and sculpt them in medal winners. Gopichand’s wife Pullela Lakshmi was also a shutller and had played in the 1996 Olympics at Atlanta. Saina Nehwal, Kidambi Srikanth, Parupalli Kashyap, Prannoy Kumar are other notable players apart from PV Sindhu who have trained under the guidance of Gopichand.