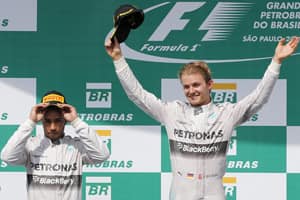 Hamilton took the chequered flag 1.4 seconds behind after setting the fastest lap, with Mercedes breaking Formula One records with 11 one-two finishes and 30 podium placings in a season.

“It was a great weekend,” said Rosberg, who started on pole position after lapping fastest in phase of qualifying at Interlagos.

“The whole weekend I’ve been feeling comfortable in the car, I was able to attack and control the gap to Lewis in the race so that worked out great.

“There’s still all to play for. I just need to keep this going now,” added the German, whose win made up for last weekend when he started on pole in Texas and lost out to Hamilton.

The final race at Abu Dhabi on Nov. 23 will offer double points for the first time, and 50 for the winner, but Hamilton needs only a second-place finish to wrap up his second title.

The team’s victory equalled the record of 15 in a season held jointly by Ferrari and McLaren, with Rosberg now on five to his British rival’s 10.

Hamilton’s only scare came on lap 28 as he pushed to gain an advantage when Rosberg pitted, spinning and skidding off at turn four. That cost him seven seconds and a chance to win.

“I was much quicker up until that point and on that lap I’d gone a second quicker while Nico pitted,” the Briton told reporters. “I thought I was going to pit at the end of that lap so I used everything of the tyres.

“The next lap I had nothing left.”

After he pitted, the 2008 champion steadily narrowed the gap until the ‘Silver Arrows’ were just half a second apart. But Rosberg never allowed him to get close enough to make a move.

“It was an amazing race,” said Hamilton, who had hoped to become the first British driver to win six races in a row.

Brazilian Felipe Massa returned to the podium in front of a cheering crowd with third place for Williams, 41 seconds behind despite a stop/go penalty for speeding in the pitlane.

Massa had only himself to blame when he also pulled in to the McLaren pits instead of Williams.

“I’m so happy with the race, not happy with my mistakes today,” he said.

“I stopped in McLaren (garage) because they changed our garage this race and we are a lot more in the middle and McLaren with the similar colour…I thought it was our garage.”

Australian Daniel Ricciardo, winner of three races this season, retired his Red Bull to end a run of 15 scoring races in a row. The outgoing champions at least ensured they finished runners-up in the standings. Only nine teams and 18 cars started, with Marussia no longer in business and Caterham in administration.