Manchester United’s Michael Carrick is their only absentee for this weekend’s visit to West Ham, Louis van Gaal says in a rare positive update in a season dominated by injury troubles. 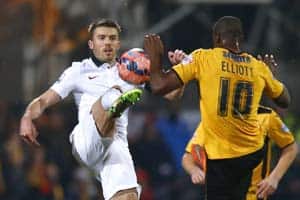 Manchester United midfielder Michael Carrick is their only absentee for this weekend’s visit to West Ham United, manager Louis van Gaal said on Friday in a rare positive update in a season dominated by injury troubles.

United are returning to full strength after being hampered for most of the campaign, with Van Gaal chopping and changing his team as he has made do without the likes of Phil Jones, Marcos Rojo and Ashley Young for long spells.

Carrick is now the only United player left on the sidelines after rupturing his calf muscle in the run-up to last week’s Premier League win over Leicester City.

Despite a mixed start to the campaign in which United’s results have frequently been better than their performances, they are third in the table and into the fifth round of the FA Cup.

Van Gaal, however, is determined not to get complacent and despite the 10 point-deficit to leaders Chelsea is keen to kick on starting at Upton Park on Sunday.

“I said that at the beginning of the week before the game against Leicester City, that this is an important week and we have to win all three matches,” he told reporters on Friday.

“After we beat Leicester we were third in the league. After that, we beat Cambridge and we are in the next round of the FA Cup.

“Now, we have to continue, but it’s not so easy because we have to play away in London against West Ham and it was a tough game in Manchester. We have to win in London.”

Van Gaal has faced criticism that his side have struggled for attacking fluency, with some suggesting their three-man defensive system sacrifices flair in favour of possession.

The United manager laid flowers at a ceremony to mark the 57th anniversary of the Munich air disaster on Friday.

“I represent the club. I think the players who died played a big part in the history of the club. We must remember that always,” he said.