After a sluggish start to Premier League season, Manchester United have found their feet, with 31 points from 16 matches. 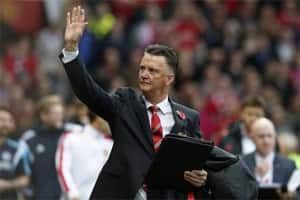 Ever the perfectionist, Manchester United manager Louis van Gaal is still chasing the complete performance despite a run of six straight victories that have propelled his side to third in the Premier League table.

After a sluggish start to the season, United have found their feet and the 3-0 win over fierce rivals Liverpool last weekend moved them on to 31 points from 16 matches.

Despite showing signs of improvement and closing the gap on leaders Chelsea to eight points, Van Gaal is still searching for that elusive perfect performance.

“When you win six times in a row the confidence is rising, but I’m still looking for a game that is more close to the perfect game,” the Dutchman told a news conference on Friday.

“For me, the performance is very important. When you perform well, you win more and that’s what I want to show to the fans.

“The players want to show that. The guarantee of wins is much bigger when we perform better.”

United travel to 13th-placed Aston Villa on Saturday on the back of their convincing win over Liverpool, but Van Gaal does not envisage that result having any bearing against a Villa side that have started to move up the table in recent weeks.

“I don’t think one game can have a big influence,” Van Gaal said. “The team can improve more but I don’t think it was a great surprise that we won.

“They (Villa) haven’t lost so much. They draw, they win, and when they lose it’s always by a one-goal difference. It shall be very difficult.”

Angel Di Maria, who has not featured since United’s 3-0 win over Hull City on Nov. 29 due to a hamstring injury, could return to the bench against Villa.

“He (Di Maria) has trained this week with us but he’s not match-fit after one week,” Van Gaal said. “I have to make my decision because we have one training session to go.”

Colombian striker Radamel Falcao has struggled with injuries since joining on loan from AS Monaco and Van Gaal refused to be drawn on whether he would start against Villa.