Jordan Henderson scored a fortunate second-half winner as Liverpool beat Swansea 1-0 in the Premier League to keep the pressure on the top 4. 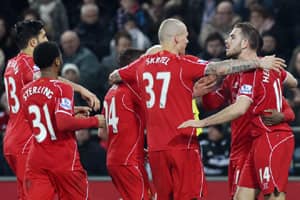 Jordan Henderson scored a fortunate second-half winner as Liverpool beat Swansea 1-0 in the Premier League on Monday to keep the pressure on the top four in the race for Champions League qualification.

A covering clearance from Swansea defender Jordi Amat hit the right shin of Henderson on the edge of the penalty area, skimmed off the wet turf and looped over stranded goalkeeper Lukasz Fabianski into the net.

Liverpool’s fifth straight win kept the team unbeaten in the league since December – a run of 13 games – and two points behind fourth-place Manchester United ahead of their meeting at Anfield on Sunday.

”We can’t wait (for United),” said Henderson, who has scored in three straight league games. ”We are high in confidence and have great momentum.”

Swansea failed to capitalize on a dominant first-half display in driving rain at Liberty Stadium, during which Liverpool goalkeeper Simon Mignolet saved superbly from Bafetimbi Gomis and Gylfi Sigurdsson, and faded after halftime.

Steven Gerrard came on as a substitute for Liverpool for his first appearance since Feb. 10, but it was the man who has blossomed in Gerrard’s absence who proved to be the match winner.

Henderson scored superb goals against Manchester City and Burnley in recent weeks. This one, though, was all down to luck after he ran through the middle onto Daniel Sturridge’s flick.

”I got a little bit fortunate with the finish,” Henderson said, ”but you have to be in the right position to score.”

It was a sixth straight clean sheet away from home for Liverpool, which has climbed from mid-table in December to fifth position and only four points behind second-place Manchester City.

”We’ve not done anything yet but from where we were at the beginning of the season, the intent we’ve shown and the work we’ve had to put in to claw it back and give ourselves a fighting chance is fantastic,” Liverpool manager Brendan Rodgers said.

”Our aim is to finish as high as we can – it’s not to finish fourth. With Man City losing (to Burnley on Saturday), there’s an opportunity there to push on.”