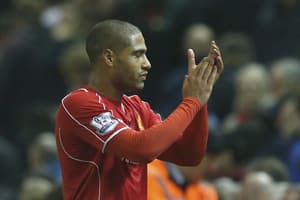 Glen Johnson scored a late header to give Liverpool a 1-0 win over Stoke in the Premier League on Saturday, ending a three-match losing streak.

Johnson’s goal came in the 85th minute after Paul Lambert’s looping header came off the crossbar. Johnson raced to the rebound and the right back headed it into goal, prompting ecstatic scenes at Anfield.

Stoke forward Bojan nearly equalized with a volley in added time, but Liverpool goalkeeper Simon Mignolet’s fingertips came to the rescue and the ball was diverted out for a corner.

Liverpool manager Brendan Rodgers had been under pressure after the team slid down the table following league losses to Crystal Palace, Chelsea and Newcastle, and poor performances in the Champions League.

The Merseyside club moved into 11th place in the league with 17 points, just ahead of Stoke, which has 15 points.

After a poor first half with no shots on target, both teams hunted for a goal with a series of end-to-end chances in the second interval.

Liverpool midfielder Jordan Henderson’s 18-yard volley went just wide of the near post in the 51st minute, after the ball bounced off up for him when a pass from Lucas deflected off Ryan Shawcross.

Bojan’s throughball to Mame Biram Diouf in the 55th brought Mignolet off his line momentarily before retreating. Diouf tried a low shot, but it was scooped away by Mignolet’s feet.

Bojan struck a post in the 61st after blazing past Lucas to cut inside. Moments later, Raheem Sterling fired a low effort that flashed wide of the far post.

Lucas wasted a good opportunity in the 64th for Liverpool with a five-on-three, shooting weakly at Stoke keeper Asmir Begovic, who easily saved the effort.