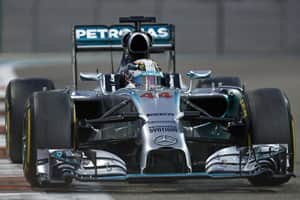 The 29-year-old Englishman, who took his first title in 2008 with McLaren, won not only the 55-laps race, but also his private duel with Mercedes team-mate Nico Rosberg, who suffered prolonged problems with his car after making a poor start from pole position.

Having started from the prime spot on the grid for the 11th time this year, Rosberg was comprehensively outpaced as Hamilton surged clear to control the race with a well-judged and dominant performance.

Hamilton’s victory was his 11th of the season and the 33rd of his record-breaking career and secured a record 16th victory of the season for the Mercedes team.

As Hamilton roared his delight – “Whoooah world champion – Oh my God, cannot believe it – thanks everyone” – Prince Harry responded on the team radio. “Thank you very much Lewis for not letting the British public down, you are a legend.”

Hamilton became the fourth British driver to win more than one championship, joining Jackie Stewart, Jim Clark and Graham Hill, the last man to succeed in 1968.

Rosberg struggled with a series of problems that hampered his performance, but refused to retire when offered a chance to pit with two laps remaining.

“I’d like to go to the end,” said an emotional Rosberg, who knew his fate when he was lapped at the end.