Olympics India 2016 Badminton: Kidambi Srikanth vs Lin Dan – After a tough fight The valiant K Srikanth lost a great match to one of the best players in the world in the form of China’s Lin Dan. 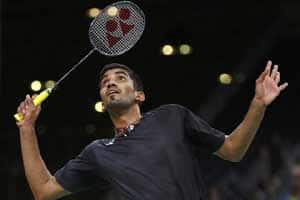 Olympics India 2016 Badminton: Kidambi Srikanth vs Lin Dan – After a tough fight The valiant K Srikanth lost a great match to one of the best players in the world in the form of China's Lin Dan.

Olympics India 2016 Badminton: Kidambi Srikanth vs Lin Dan – After a tough fight the valiant K Srikanth lost a great match to one of the best players in the world in the form of China’s Lin Dan. And, despairingly, for India, after days of disappointment, another chance at glory has gone abegging. Needless to say it was expected to be a huge fight and the odds were stacked against the Indian player. That he eventually succumbed after getting himself into a good position was tragic and reflects the results in other events at Rio Olympics where India came so close to clinching a medal only to be thwarted. Kidambi Srikanth lost to Lin Dan 21-6, 11-21, 21-18.

Kidambi Srikanth got the opportunity to play Olympic gold medallist and world champion Lin Dan of China in the quarter-finals of the men’s singles badminton event at the Rio Olympics today courtesy his win over Jorgensen. Srikanth, who is ranked as World No.11, beat Jorgensen, ranked World No. 5, 21-19, 21-19 in 42 minutes to set up the final. For India the stakes were very high as its medals cupboard is empty.

Needless to say, it was a great opportunity for India as Srikanth showed great gumption to take the fight to Lin Dan after losing the initial set tamely. In fact, the first set was a disaster of the highest magnitude. In the second set Srikanth was all over the court and his smashes and drop shots were exemplary. Lin Dan, who looked supremely fit, was bemused. He was left guessing about where he should focus on and what he should ignore. The quality of play by Srikanth was so good, that thoughts of even winning a gold medal flashed across fans minds, fleetingly. But that was not to be.

However, after Srikanth started tiring, Lin Dan slowly snatched the initiative. His power play was as effective as Srikanth’s was earlier except now the shoe was on the other foot. Srikanth wilted in the face of this scintillating attack. If earlier Dan was left facing the prospect of not knowing how to effect a fightback, this time it was Srikanth. Unfortunately, by the time that Srikanth realised what was happening, the third set was almost over.

Not that the third set was that bad. There was a time that Srikanth was actually leading in it – 13-10! Lin Dan had started well by pocketing the first 2 points in the set and thereafter Srikanth had improved his play to take the lead 3-2. Next 2 points were Dan’s. It was like two boxers getting into a rhythm one after the other and landing effective power punches. But after the half-way mark, Srikanth could not stop Dan from equalising at 14-14. It was the crux of the match and that is where Srikanth slipped. It was the perfect time to extend the lead and make it unbeatable, but that is not the way it transpired. The initiative was with Dan throughout the third set and at no time did he look like being  the weaker player.

Dan kept on reeling in the points and was comfortably placed at 18-16 and seemingly cruising. It became 19-16 and then 19-17. Dan then ensured that nothing could come between him and victory today as he made it 20-17 by forcing an error from an increasingly desperate Srikanth who tried to smash himself out of the hole he was in, but only ended up losing the point. However, it became 18-20 and raised the excitement in the crowd to a crescendo, unfortunately it did not work.