Karun Nair became the third batsman ever who converted their first Test match century into a triple ton. He is also the second Indian batsman to score a triple century after the great Virender Sehwag. 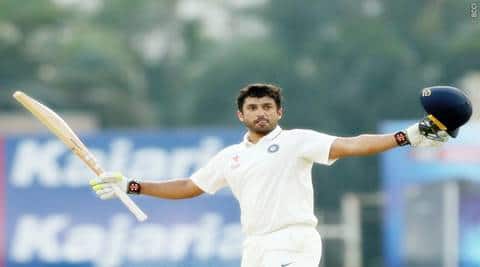 when we talk about memorable it doesn't mean the higher in number but significance. (Source: BCCI)

Karun Nair became the third batsman ever who converted their first Test match century into a triple ton. He is also the second Indian batsman to score a triple century after the great Virender Sehwag. Born in Jodhpur, Rajasthan, 15-year-old Nair made to the Under 19 team, played for Karnataka and was known for his long innings. With his maiden triple century at the India vs England test at Chennai, his immense talent was on display. Nair made his first-class debut for Karnataka against Punjab in Ranji trophy 2013-14 where he made full use of as he made three consecutive centuries, and two out of them were in the quarterfinal and semifinals. He was a part of the Ranji winning team which ended the 15-year drought for Karnataka, and he did it by hitting big six. Nair scored a magnificent 328 in the final of the Ranji Trophy in the 2014-15 season. But his biggest reward was when the great Rahul Dravid spotted him as he was signed up by Rajasthan Royals franchise for the Indian Premier League (IPL).

He became a permanent member of the RR squad and at times opened the batting as well. Later, he went to Royal Challengers Bangalore and then to Delhi Daredevils for a whopping Rs 4 crore though his base price was just Rs 10 lakhs. Nair showed consistent performances for his state team and for India A which earned him a place in the Indian squad when he joined the Test team in Sri Lanka and came as a replacement to M Vijay. But Nair did not debut in the series. Nair made his ODI debut against Zimbabwe at on 11 June 2016 and his Test debut against England at Mohali on 26 November 2016. Nair got that much-anticipated Test debut, in the Mohali Test in the current India vs England Test series, as opener KL Rahul had to pull out injured.

In the last two years Karun Nair has proved himself in many situations in domestic circuit again and again, and now with such a great innings at this age and talent on his side, it will not be surprising if he becomes the next big thing in Indian cricket.